The A-League has a new look, but can it win back some old fans?

A frenetic start, a handful of new venues and a last-minute TV deal – the A-League is in transition, but is it enough to save the competition?

“I think that if there’s been an issue with the league, it’s been with a collection of owners who haven’t been able to sell to a fanbase that they’re there for the good of the game,” says Fox Sports commentator and recent PhD graduate, Dr Andy Harper, on the eve of the 2020-21 A-League campaign.

It’s hard to argue the A-League hasn’t stagnated in recent seasons. From a high of nearly 62,000 fans turning out at ANZ Stadium for a Sydney derby in 2016, last season average attendances dipped below the 10,000 mark for the first time in years – even before the COVID-19 crisis hit. 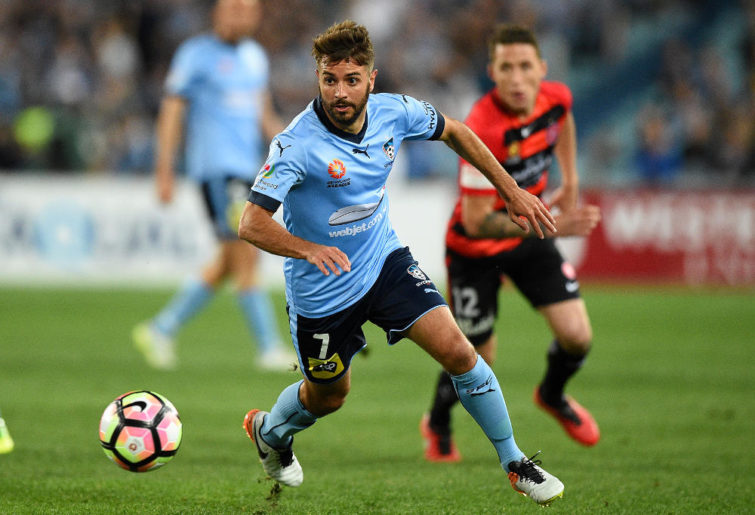 The pandemic wreaked havoc on the latter half of the campaign and has forced a number of changes on the 2020-21 season, including a vastly reduced broadcast deal which has seen budgets slashed and star players like Adam le Fondre, Mitch Duke and Dimi Petratos move abroad. There’s also, for the first time in A-League history, a late December start – with the eventual aim for the competition to gradually transition into a fully-fledged winter league.

That’s not a bad thing, according to Brisbane Roar attacker Scott McDonald, who says playing in high temperatures makes it difficult to produce an entertaining spectacle.

“If you’re asking someone to do that in 35-degree weather, you’re having a laugh, aren’t you? I just think it’s physically impossible,” McDonald said.

“Would we ask AFL players or NRL players to play in 35, 40-degree heat and expect them to play at the intensity levels they play at now?”

It’s a sentiment echoed by Lou Sticca, who as a player agent was responsible for bringing household names like Dwight Yorke, Shinji Ono and Alessandro del Piero to the league.

“You saw when the A-League resumed (after the COVID-19 break), those games were played in the cooler months and you could see – vividly – the players’ energy was in abundance compared to playing at four or five o’clock on a summer’s night,” Sticca said.

Sticca believes the summer heat is one reason A-League crowds have dwindled in a market flooded with other entertainment options.

He’s a firm believer in the value of recruiting marquee players to bring fans through the gates but says signing them only works when clubs get several other off-field metrics right.

“When you’ve got a real star, you want to be as close as you can. You want to be at the stadium because you can see him them first-hand, up close – you can feel the buzz that these sorts of players generate,” Sticca said.

“I’m certainly not suggesting that having a marquee, in itself, is the panacea to fixing all our problems – far from it.

The last bona fide marquee to join the league was Japanese midfielder Keisuke Honda, who spent the 2018-19 season with Melbourne Victory, however Sticca says not all marquees have to be foreigners.

“I would say that one of the best marquees in the history of the A-League was Archie Thompson,” Sticca said.

“People wanted to go to the stadium, they wanted to have Archie’s name and number on the back of their shirts. He was a true marquee.”

But with budgets slashed and marquees seemingly out of reach for most clubs, much of the off-field debate continues to focus on football’s inability to convert some of the game’s two million grassroots participants into match-going A-League fans.

“Being a fan of something doesn’t always mean you have to play the game itself. If that was the case, no one would watch rugby league,” he said.

For players like McDonald, whose Brisbane Roar will spend the season at the 11,500-capacity Dolphin Stadium in Redcliffe on the city’s northern fringes, improving the matchday experience is a simple way to increase attendances.

“When we played Perth Glory there (last season) – I know the game against Melbourne City was fantastic as a spectacle because we came from 3-1 down – but the Glory one, Perth brought fans with them. And they had their own little section.

“For me, that was like, wow! You don’t see that too often in the A-League.”

Getting fans through the gates is something clubs will have to work doubly hard on in 2021, as the region re-emerges from the grips of a global pandemic.

After spending the back end of last season based in Sydney, the A-League’s sole New Zealand representative, Wellington Phoenix, will start the new campaign playing out of WIN Stadium in Wollongong.

Newcomers Macarthur FC will bring regular top-flight football to Campbelltown Stadium in Sydney’s south-western outskirts for the first time, while many of Western United’s games are yet to be confirmed as the club shuffles games between Geelong and Melbourne’s western suburbs.

As for the A-League’s continuing reliance on its Fox Sports broadcast deal, many observers believe an over-the-top streaming service – possibly run by the A-League itself – is the logical way to future-proof the competition.

Yet for Harper, it’s the game’s administrators who must shoulder the burden of responsibility for getting the competition back on track, as A-League clubs crawl their way towards full independence from the recently re-named Football Australia.

According to Harper, the equation should be simple.

“Local owners, with enough resources to invest, who have a vision and care deeply about winning. I don’t think that formula is that much of a mystery.”