I’m unsure how smooth I want that transition to be.

But to understand that stance, let me backtrack and give credit where it’s due: Eddie McGuire was pivotal in revitalising Collingwood.

When he took over as president in late 1998, Collingwood was unravelling. Their on-field fortunes had plummeted. Off-field, they were struggling financially.

Eddie would seem an unusual choice. Just 34, he was a sports journalist, and the host of The AFL Footy Show (when it was truly innovative and funny) – not exactly what you would’ve considered presidential material.

But he was ambitious and driven. He infused Collingwood with his energy, and dragged them into the modern era as the game evolved into its next incarnation.

After a wooden-spoon year in 1999, McGuire revealed Mick Malthouse – effectively poached from the West Coast Eagles – as the new coach of Collingwood in a ceremony full of pomp and grandeur.

Malthouse didn’t look too happy about it, but this was the new Collingwood.

Prior to their 2017, 2019, and 2020 flags, Richmond were seen as the sleeping giant – a club with a tremendous fan-base that just needed success to awaken them.

Imagine they could be forged into a club that enjoyed dynastic success. It wouldn’t just be an awakening giant, but some colossus.

They just needed to find that in them. I didn’t expect them to be winning every grand final they made but, hey, just break even and we’re looking better than the rest.

In just Malthouse’s third year at the club, he guided Collingwood into the 2002 grand final against reigning premiers Brisbane Lions. This was a rapid turnaround. Collingwood had finished last in 1999, second-last in 2000, and ninth in 2001.

They’d turned over more than 25 players in two seasons. Now they had a chance at a flag against a monster side.

Despite my writing and criticism, I’m an idealist.

Walking from the MCG after the 1990 grand final, I thought Collingwood could build a dynasty with a young squad. Nope. We squandered it through largesse. But now I saw the opportunity present itself again.

Imagine winning a flag just three years after a spoon. Imagine knocking off the champions (who Collingwood had beaten at Etihad earlier that year). Imagine simply winning – this from a club infamous for its grand final losses.

It could break everything negative and tragic and self-defeating about the club. It wouldn’t even be about reinventing, but inventing the club, like it was built from something entirely new.

Collingwood lost in typically heartbreaking circumstances. I didn’t care about the honourable loss, or Anthony Rocca’s kick that looked a goal but was deemed a behind, or Jason Cloke’s suspension.

All I could see was the failure. Because that’s what history records. I’m sure there are stories and mitigating factors behind lots of grand final defeats.

History cares only about inflexible statistics. Victors rise above those anchors. 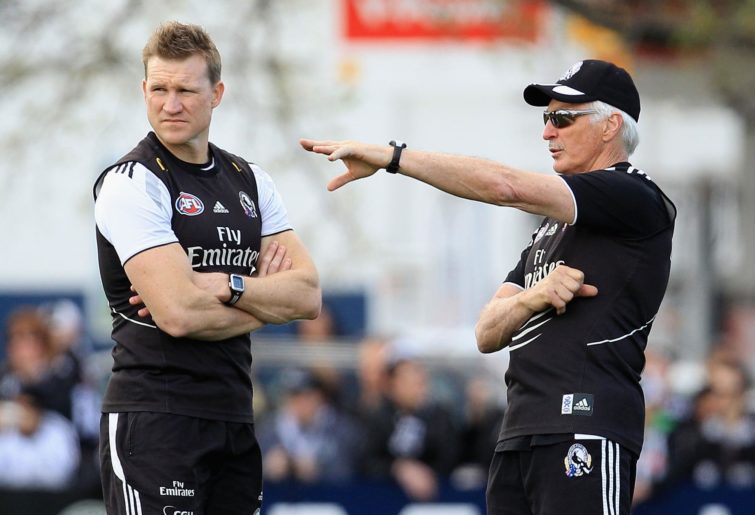 Come 2003, Collingwood had a slow start to the season, and then came home strong. They charged into the finals, and into another grand final. This time they were favourites. Brisbane were seen as ageing and injured.

Collingwood had beaten them weeks earlier in the Qualifying Final. Here was a chance for atonement.

Uh huh. Now, they not only lost, but were smashed.

Ironically, after all the promise and excitement of this new era, Collingwood had resurrected what was – and had been in the modern era: the Colliwobbles. We could not find a way to win, but we could find ways to lose, and console ourselves with excuses.

Off-field, we were relatively sound. I’m grateful for that – that we’re not a club that has to ask for handouts, rely on others, and cling to survival. But it wasn’t the priority. I’d rather be a poor club winning flags than a rich club simply contending.

Eddie McGuire fought for causes such as eliminating the Cost of Living Allowance and salary cap advantages.

Whenever he was interviewed, he was the consummate professional. He spoke eloquently, passionately, and always articulated his case.

There was the disastrous Beach Hotel investment, but every administration is allowed that one big screw-up – you’ll forgive them the exception as long as it remains the exception.

It’s when these decisions become the rule that you worry.

Now, with two grand final losses behind them, Collingwood sat at a juncture. To Malthouse’s credit, instead of letting the team peter out into mediocrity, he and the club proactively rebuilt.

The list was comprehensively overhauled. The club drafted and recruited wonderfully over the next five years.

Despite finals from 2006 – 2008 (and a preliminary final in 2007), Collingwood drew up their succession plan in 2009. At that point, Malthouse was looking tired. Nathan Buckley was a hot coaching prospect.

Flags were being won by the likes of Alastair Clarkson, Mark Thompson, John Worsfold and Paul Roos. The general perception was Malthouse would cultivate a young squad, and Buckley would have the contemporary innovation to take it the rest of the way.

Naturally, Collingwood won the flag in 2010, which invalidated the logic behind the succession plan, and left them in a quandary.

Should they go ahead with the succession? Publicly, they asserted the deal had been done and that was all there was to it. Internally, I’m sure the discussions were longer.

But Collingwood stayed true to their word and enacted the succession at the end of 2011 – ironically, following a grand final defeat.

Now at this time – and despite the loss – excitement and hope and optimism remained high at Collingwood. One era was closing, but we were entering another with a young playing list, a recent flag, and a new coach. What better springboard could you want?

Nathan Buckley is a playing legend at Collingwood – every time I talk about his playing career, I comment he doesn’t get the respect he deserves as a player from the greater football public and media.

As entertaining as Collingwood had been in 2010 – 11, they still relied on the Malthouse ethos of chip around the boundary to mitigate damage in the case of a turnover.

Under Buckley, we thought the team would play a dynamic brand that embodied his playing traits – long and direct and purposeful.

Although Collingwood played in finals in 2012–13, performances were often listless. They’d become a spluttering machine that fired spasmodically.

Then they missed finals from 2014–17. We questioned what the hell we were seeing out there in terms of structure and intent. Supporters grew restless.

Eddie McGuire also committed several verbal gaffes that seemed horribly unEddie. This is a guy who’d been able to mesmerise in the first half of his tenure.

Any one of these gaffes might’ve sunk anybody else. Eddie offered heartfelt apologies and on we went, fearing what might come next.

Injuries were a constant to the extent that supporters stopped querying them, and accepted them as part of the Collingwood under Buckley. Question marks dotted list management (and now, we can add exclamation marks). Many of the 2010 premiership heroes left acrimoniously.

While the first half of McGuire’s tenure was filled with hope and excitement, dread pervaded the second half – a feeling that Collingwood was never quite right, and every effort fell just short of syncing the club back into alignment.

There was an unending sameness. I’d daresay that many became jaded. The devotion to the club was there, but not that unbridled, untarnished aspiration. We’d gone from young love to mature love to staying together for the sake of the kids.

A lot of that simply emerges from a lack of change. We see the same faces, hear the same messages, and stop believing in new outcomes.

When we demand accountability on issues and nothing happens, we stop demanding and accept issues as a part of life. The standard drops. Instead of reaching for the best and aspiring to outdo the rest, we exist for the sake of existing, and claw desperately just for relevance.

And, again, McGuire should be given credit for being the dynamo who helped lift Collingwood from derision and build them into the force they became. For that, I – and I’m sure countless other Collingwood supporters – thank him.

But nobody can deny that the second half of his tenure hasn’t had its problems, and those problems have affected the club’s fortunes. It is possible to thank the man, to appreciate the man, acknowledge the man, while also querying a period of his reign. 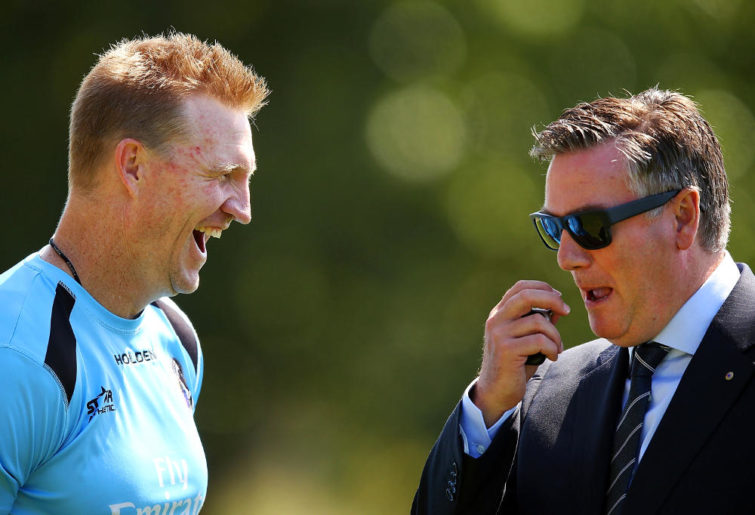 That’s not the case. It’s simply the exception that came to be – and, unfortunately, an influential exception it has been.

As a whole, though, looking at the highs, lows, grand finals, and everything else involved, the epitaph on Eddie McGuire’s tenure will be simple: “It was just so Collingwood.”

In moving forward, I would implore Collingwood to find a successor from outside their own four walls.

While I’m sure internally they have great people – and, potentially, even great candidates (on paper) – they are part of the same fabric, and are likely only to offer us more of the same.

It’s time for more than that.

The song cannot remain the same.

Find somebody new, even somebody abrasive to their ideals, who will challenge them, stimulate them, and create robust discussion to find means to take Collingwood into a new era, and galvanise the club just as Eddie once did.