Home pitch bully no more, Ashwin is an all-conditions star

Indian off spinner Ravi Ashwin was long derided for relying on spin-friendly pitches and wilting outside of Asia.

But with a wizardly performance at the MCG on Boxing Day, he again underlined his growth into an all-conditions star.

The 34-year-old tweaker was a constant threat as he took 3-35 from 22 overs to be the pick of the bowlers for India, who rolled Australia for 195 before going to stumps at 1-36.

In a country where visiting spinners are routinely tortured, producing such figures on the opening day of a Test is extraordinary.

Over the past five years, touring Test spinners have collectively averaged a whopping 79 in Australia. Those figures don’t include Ashwin, whose return in that time is a remarkable 14 wickets at 18.

Further highlighting how well Ashwin has bowled down under in that period is his miserly economy rate of 1.89 runs per over. By comparison, Pakistan’s Yasir Shah – the world’s best leg spinner – has played five Tests in Australia during that time and gone at 4.7 runs an over.

Ashwin is now suffocating the Australian batsmen on their own soil, just as he does whenever they tour India. His mastery of Asian conditions is legendary – he’s taken nearly 300 wickets at 22 on that continent, and averages almost six wickets per Test.

Those successes used to come with an asterisk, in the eyes of some cricket observers, due to his lack of impact in Australia, England, South Africa and New Zealand. Even his own camp doubted his ability to flourish outside Asia, with India often omitting him from their Test XI.

Up until 2017, he averaged 57 with the ball in those four nations. Since then, however, Ashwin has taken 35 wickets at 26 in those countries.

He has adapted to those conditions by bowling with far greater over spin than he uses in Asia.

The natural variation of pace, bounce and turn typically offered to spinners by Asian pitches means slow bowlers don’t have to get heavy revs on the ball. That’s because they don’t necessarily need to beat batsmen in the flight or gain steepling bounce.

Accurate spinners who hit the right areas monotonously will get rewarded by Asian conditions, more often than not. That’s because two identical deliveries can often behave very differently – one will turn and bounce, the other will skid on straight.

It is this natural variation that’s confounded Australian batsmen in Asia, rather than Shane Warne or Muttiah Muralitharan-style jaffas that drift miles and then turn square.

To make the most of this natural variation, many Asian spinners tend to bowl with a lot of side spin, essentially undercutting the ball, rather than using heavy over spin.

On hard, true Australian decks, though, this style of spin is cannon fodder. The ball just slides on straight, and the lack of over spin means the bowler gets minimal dip or drift, so they will rarely defeat a batsman through the air.

On his early tours outside Asia, Ashwin tried to alter his approach but too quickly resorted back to what he knew.

Now, however, he has the skill and confidence to seamlessly shift back and forth between the two styles of bowling. 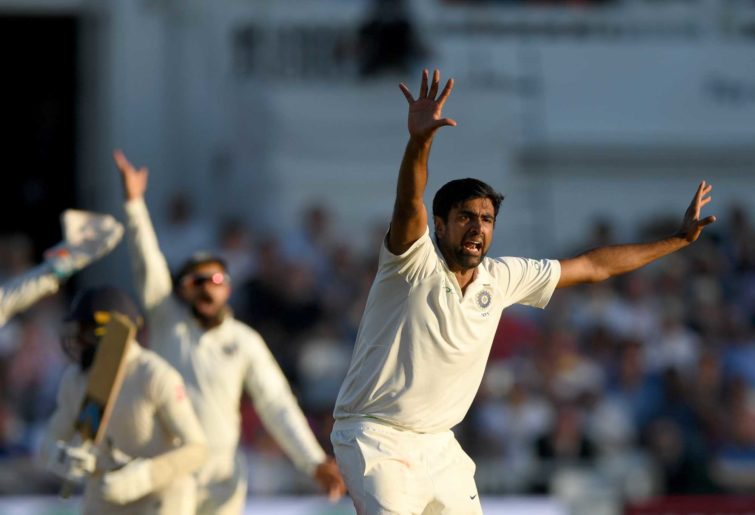 His 188-centimetre height means that when he does rip over the top of his off breaks, he can earn disconcerting lift. He also gets deceptive drift and tantalising loop.

Stand-in Indian captain Ajinkya Rahane is so confident in Ashwin that on Boxing Day he brought him into the attack after just ten overs. It was a wise choice.

Ashwin almost struck with his fourth delivery, when Marnus Labuschagne misread his looping trajectory and lobbed an inside edge just wide of leg slip.

In Ashwin’s next over it was his top spin again that tricked the batsman, this time makeshift opener Matt Wade, who was beaten in the flight and skied an ugly hoick to be out for 30.

Minutes later, Ashwin dismissed Australian superstar Steve Smith and the home side was in disarray at 3-38.

That wicket came from an unremarkable delivery that pitched on middle and leg and would have missed leg stump by a foot. Certainly it was not the sort of ball you’d expect to bother Smith.

But India had a trap set, with a leg slip waiting to pouch the catch, which came off the face of Smith’s blade as he played a leg glance.

Prior to this summer, Smith had always handled Ashwin like a net bowler. While the Indian has puzzled most other Aussie batsmen, Smith had averaged 116 against him in Tests. Across three previous series, Ashwin had bowled 570 balls to Smith, dismissing him just three times.

Now, this summer, he has figures of 2-0 against Smith from just five balls. With Smith short of runs, and gun opener David Warner still injured, Australia’s batting line-up has been exposed so far.

The hosts are no closer to identifying a long-term opening partner for Warner, with neither Wade nor Joe Burns grabbing their chances.

Labuschagne has been kept in check, while Travis Head and Cameron Green are yet to make an impact in the middle order.

Even without fine quicks Ishant Sharma and Mohammed Shami, the Indian attack was brilliant on Boxing Day. Although Jasprit Bumrah ended with the most wickets, it was Ashwin who was the standout.

Long gone are the days of being labelled a limited bowler. Ashwin is now a match winner on any continent.