Most Irish rugby legends are Munster legends. The great characters like the marauding Moss Keane or the mercurial Tom Kiernan.

Most famously, Munster became the first Irish side to beat the touring All Blacks, in 1978.

The legend of that win has been celebrated both in story and on stage. Alan English, in his tour de force retelling Stand Up and Fight, expresses the power of Munster legend: “More than 100,000 people claimed to have watched the game, even though the ground could only hold 12,000.”

Then there was even a stage play, by John Breen, called Alone it Stands. For Munster, rugby is art and memory, friendship and song.

The Golden Generation
Fast forward 20 years and Munster were the first Irish side to excel in the new era of professional rugby. Such excellence was unexpected in the last days of amateurism.

Irish rugby in the 1990s had been largely characterised by mediocrity and defeat. Public interest in the game was on the wane and a game between Munster and Leinster might struggle to draw a crowd of more than 500 hardy long-suffering souls.

Yet things were changing. When Munster thumped English heavyweights Wasps 49-22 in late 1996, it was clear that something was changing. Munster continued their rise, making the Heineken Cup final in 2000 and in 2002, only to be cruelly denied on both occasions.

Thankfully after the heartache of losing two finals, success wasn’t far away as Declan Kidney’s men won the Heineken Cup in 2006 and again in 2008. 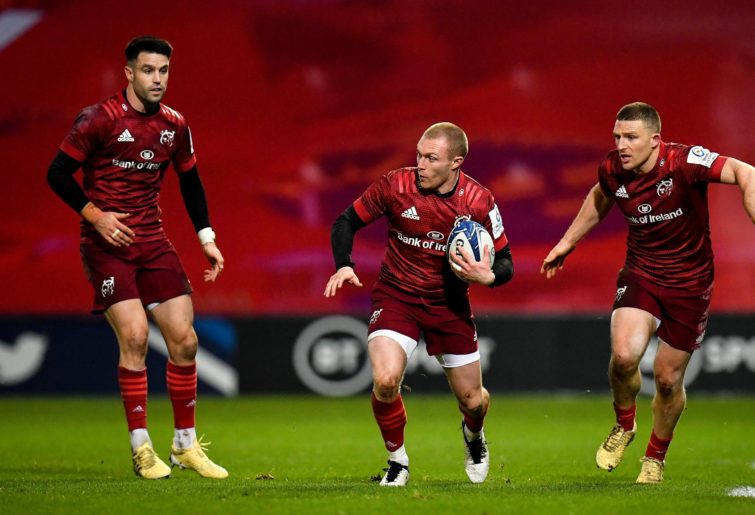 Keith Earls of Munster, centre, supported by team-mates Conor Murray, left, and Andrew Conway during the Heineken Champions Cup Pool B Round 1 match between Munster and Harlequins at Thomond Park in Limerick. (Photo By Seb Daly/Sportsfile via Getty Images)

A slow decline
However, over the 2010’s decade, Munster rugby had fallen on lean times as Leinster, their patrician rivals in Dublin, stormed the barricades of European rugby to win the Heineken Cup on four occasions. The great players, O’Gara, Stringer, Hayes, O’Connell had all retired.

Over the last decade coaches came and went. Tony McGahan and Rob Penney among them. Success was elusive and Munster rugby entered a long slow decline. Ex-Leinster players were brought in to supplement the Munster squad and pundits worried that the talent from the Limerick player nurseries had dried up.

The quality of Munster rugby during latter years of the 2010’s was turgid, lacking in invention and skill. Even Irish minnows Connacht managed to win the Pro12 in 2016 under the tutelage of Pat Lam, while the Munster trophy cabinet remained bare.

Tragedy and victory
Then something tragic happened. Head coach, former Munster captain and erstwhile No 8 Anthony Foley passed away suddenly in October 2016, on the eve of a Heineken Cup game in Paris.

The response palpable. An enormous outpouring of grief that galvanised and energised Irish rugby and the Irish rugby community.

Just a few weeks later, Ireland played the All Blacks in Chicago. It was an emotional day. A lone violinist played a haunting rendition of the rugby anthem Ireland’s Call.

The Ireland players formed a “figure eight” (Foley’s jersey number) to face the Haka, a profoundly worthy response to the most solemn of sporting challenges.

In a sublime display, Ireland put 40 points past the All Blacks. The great foe, immortalised on page and stage was finally vanquished at Test level. 111 years of waiting was over, at last. Ireland had finally beaten the greaTest nation in the game.

New signs of hope have been in evident during an otherwise difficult year with COVID-19.

Munster are unbeaten this season with nine wins on the bounce, including an epic come from behind win against Clermont Auvergne at the Stade Marcel Michelin.

Munster are playing their best rugby in years. There is hope and excitement in the air once again.

Along the way during Munster’s winning streak, it’s been their young guns who have shone, who have bested opposing sides and have managed to close out matches for a perfect winning record.

Young guns
Remarkably, Munster now has the best rugby nursery in Ireland. A nursery, not primarily from Limerick, but in West Cork, among the picturesque towns of Bantry and Skibbereen.

Against Clermont, Van Graan and Larkham had no qualms about playing 21-year-old west Cork prop Josh Wycherley up against rugged ex-international Rabah Slimani. Wycherley wasn’t far off being awarded man of the match as Munster shunted the Clermont scrum backwards on several occasions.

Casey is a scrumhalf in the mould of Springbok Faf De Klerk or for those with longer memories, the great Irish no 9, Colin Patterson. What he lacks in stature at just 165cms he makes up for with tenacity, bravery, excellent game management and swift, accurate passing.

Then there is 23-year-old west Cork No 8 Gavin Coombes who has scored a remarkable seven tries in just nine games this season. Coombes is a strong, mobile, and damaging ball carrier. Good enough to demand a permanent starting spot alongside CJ Stander and Peter O’Mahony in the Munster back row.

Then there is brilliant 21-year-old out half Ben Healy who as starred in the Pro14 so far. In just his fourth senior grade appearance against the Scarlets in October, Healy came on as replacement with half an hour to go and with Munster trailing by 24-10. Under Healy’s direction, Munster scored three late tries, even with Peter O’Mahony red carded.

The coup de gras was a Ben Healy penalty from the halfway line, in the 82nd minute, to win the game at the death. Healy is a future Test star. Tall and graceful with an ice-cool temperament, a big boot and mop of red hair, he reminds me of legendary Ireland out half Ollie Campbell.

Summary
Munster is a remarkable team, built around the rugby mad city of Limerick, a place with a population of about 95,000. Munster is a region (or Province) rather than simply a club, incorporating Cork, Ireland’s second largest city.

Their travelling fans are legendary, following the team around Europe to away games, filling stadia with the strains of The Fields of Athenry.

They have a wonderful history, beating the All Black’s long before professional rugby crossed the River Shannon. In the era of the European Cup and the European Champions Cup, winning the prestigious competition twice.

Then there’s been decline, a decade without silverware, a dearth of talent and boring one-dimensional play. Would Munster continue to struggle in the 21st century?

But seemly out of nowhere, things have changed. A new coach in Stephen Larkham has brought a creative and compelling playbook. New talent has emerged from the sleepy country towns of West Cork. This is proud Gaelic Football country, not the most obvious of rugby nurseries.

Munster are unbeaten this season and this Sunday, 27th December, they face Leinster at Thomond Park. Leinster haven’t lost in the Pro14 since the since Round 19 of the 2018/2019 season, some 28 wins on the bounce.

But something is afoot. The game changers and match winners for the new Munster are their young guns, playing with skill, confidence and self-belief. Leinster may not have lost in the Pro14 for over 18 months, but this could be Munster’s moment to shine.

As the Munster rugby motto puts it: “To the brave and faithful, nothing is impossible..”