Exeter: From rugby obscurity to kings of Europe

The West Country is one of the prettiest parts of England.

Devon – with its rolling green hills, the beauty of Dartmoor and Exmoor, bucolic villages with delightful names like Beer, or the idiosyncratic Nadderwater – is a beautiful corner of England.

Exeter – the county town of Devon – has ancient origins with Roman ruins, a Gothic cathedral and picturesque Tudor houses. It’s the birthplace of Harry Potter, with local streetscapes and pubs providing inspiration for Harry’s magical world in the hands of Exeter author JK Rowling.

For many years, the West Country counties of Dorset, Devon and Cornwall were relatively isolated. The M5 motorway, which winds its way south from Birmingham, was finished as late as 1977. Life is slower here than in the big smoke of London or even Bristol.

Yet for Exeter it has been a remarkable rise, from a little-known rugby team in sleepy coastal backwater to the greatest team in Europe.

Origins
For the first ten years of competitive leagues in England (1988-1998), Exeter floundered in what was then the Courage Division 3, followed by a decade in National Division 1 (Division 2, now known as Green King IPA Championship) before finally gaining promotion to the Premiership (Division 1) for the 2010-11 season.

While teams are regularly promoted from the Championship to the Premiership, the top tier of English rugby has been largely unchanged throughout the era of professional rugby. A quick check of the Premiership table from 1998 sees all 12 clubs from that division present in the 2019-2020 competition.

Only Exeter and to a lesser extent Worcester have managed to storm the battlements to challenge the hegemony in elite English rugby. Promotion from lower leagues is largely unheard of, underlined by the fact that Exeter are only team to win the top four divisions of English rugby.

Premiership success
Not only did Exeter manage to make it to the elite division of English rugby – the Premiership – they excelled, finishing as high as fifth place in their just their second season in the top flight. Exeter have not been missed a Premiership final since 2015 and have won the Premiership twice, in 2017 and 2020.

Much comment has been made elsewhere about Saracens’ salary cap breaches and subsequent demotion to the Championship, but Exeter’s ability to excel against that backdrop speaks volumes for team’s character and excellence.

What makes Exeter so special?
Why Exeter? Lots of teams win competitions after all. Exeter’s success can be boiled down to a culture of excellence and a sustainable approach to coaching that develops local talent and recruits wisely.

Remarkably Exeter have had the same coach, Rob Baxter, since their days in the English second division. That culture of excellence thrives in continuity.

Unlikely many glamour clubs, Exeter doesn’t have a rich benefactor in the mould of Saracens’ Nigel Wray or Jacky Lorenzetti, owner of flamboyant Paris club Racing 92. Club chairman Tony Rowe is a local businessman who runs the club as a CEO, rather than patron.

Club ownership is in the hands of around 700 members, overseen by four trustees. The community ownership model has similarities to the AFL team ownership philosophy.

Exeter hasn’t achieved success through the sort of cheque book-waving machinations that saw former Toulon owner Mourad Boudjellal assemble a team of legionnaires in the early years of the last decade.

While Toulon may have won three consecutive Heineken Cups from 2013 to 2015, the model of buying a team of superstars by offering big salaries doesn’t make for a long-term, sustainable culture of excellence.

Rob Baxter
Much of the success achieved by Exeter can be credited to director of rugby Rob Baxter. Baxter is a local man, who played for Exeter for 16 years after joining the club in 1987, spending a decade as the club captain. Exeter rugby runs in Rob Baxter’s veins.

Rob Baxter is a coach who sets high standards. Exeter are exceptionally well drilled, with every component of the game – lineout, scrum, rolling maul, creative plays and game management – all honed to excellence on the training paddock.

His teams are extremely fit, and there are no prima donnas. No one is bigger than the team and each player gives his all. Rob Baxter values player loyalty: Ben Moon, Gareth Steenson, Jack Yeandle, Ian Whitten, Don Armand, Phil Dollman, Dave Ewers, Jack Nowell, Henry Slade and Luke Cowan Dickie all joined the club in the Championship or the early days of Exeter’s Premiership journey. That’s a remarkable record of player retention that few professional teams can match.

Marquee players
Exeter has recruited wisely over the years, hiring players to fit the team rather than simply based on reputation. 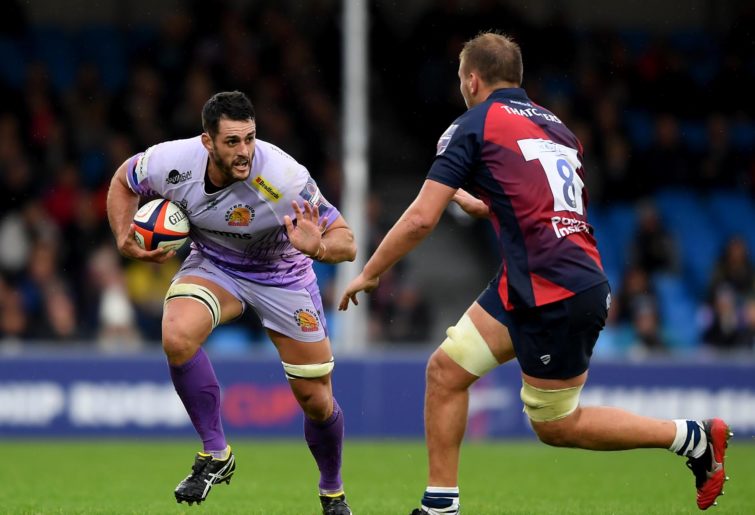 It’s apparent that much of the attraction has been due to Baxter’s character, coaching philosophy and the Exeter team camaraderie.

Recently Exeter has had a Scottish intake with Johnny Gray, Stuart Hogg and Sam Hidalgo-Clyne joining them. In rugged and abrasive South African Jacques Vermeulen, they have one of the best flankers in the Premiership.

Exeter’s rise might seem like a rags-to-riches story, but it has happened with carefully planning and a team culture built on loyalty, passion, excellence and enjoyment of the game. Few teams can match Exeter’s trajectory from the lower leagues in England 25 years ago to becoming the best side in Europe.

Exeter haven’t tried to buy success. Instead they have relied on their academy and developmental pathways. They have retained many players for eight years or more, realising that a loyal player understands the team culture and systems.

They then live in the community long term and are invested in the life of the club and the town. They become mentors for the younger emerging players. Exeter haven’t been arrogant when success and plaudits has come their way. Therefore, they have made many friends and found an army of admirers along their journey.

I’ll leave the final word to Robert Kitson author of Exe Men: The Extraordinary Rise of the Exeter Chiefs, who wrote in The Guardian: “They are not bankrolled by billionaire overseas owners, still rely on homegrown West Country talent and sundry cast-offs and even have a director of rugby, Rob Baxter, who could, if asked, shear a sheep before kick-off.”