The King’s School, Parramatta star was capped seven times for Scotland, was lauded as one of that country’s finest ever fullbacks, was wooed by England and played for the Barbarians. His back story is even more fascinating than his career.

What could possibly connect two little boys born in New Guinea and China on either side of 1900 and the Olympic Games legend as portrayed in the Oscar-winning film Chariots of Fire?

Rugby union, and the Scotland national team to be precise.

Those far-flung lads would go on to don the famous dark blue together and took on England, Ireland, Wales and France in the Five Nations Championship of 1922.

Hector Forsayth was one of the finest fullbacks Scotland ever had. He was born in Ralum, Kokopo on what was New Guinea’s first coconut plantation in 1899. He was the grandson of legendary pioneer known as Queen Emma. His aunt was my great grandmother Phebe Parkinson. He was my father’s second cousin. Boarding at the King’s School, Parramatta in Sydney, Forsayth was a star of the King’s first XV and the combined GPS team before winning a Rhodes scholarship to study at Oxford University in the UK.

Eric Liddell was the flying Scotsman of Chariots of Fire fame. He was born in Tientsin, China in 1902. The son of Scottish missionaries, he was schooled in China until he was five before boarding in England. He went to Edinburgh University and graduated in pure science. 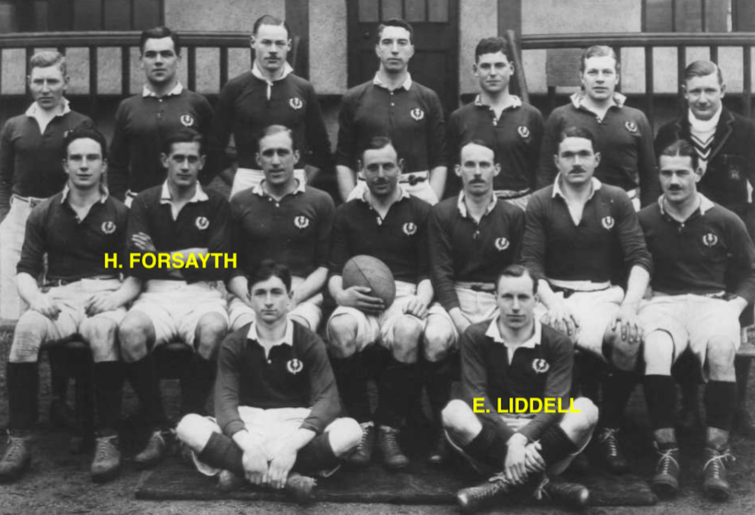 Fullback Forsayth (1921-22) and winger Liddell (1922-23) were each capped seven times for Scotland. They both played in their university XVs. Forsayth also was called up twice to play for the legendary Barbarians FC XV, the most distinguished invitational team in rugby.

Liddell’s feats at the 1924 Paris Olympics inspired the Chariots of Fire film, which won four Academy awards including best picture. The devout Christian was favourite for the 100 metres but famously refused to run in the heats because they were on a Sunday. Instead he raced and won the gold medal – in world record time – in his less favoured distance (400 metres) on a weekday.

Soon after, Liddell returned to China to serve as a missionary. He was interned by the Japanese forces in World War Two and died in a civilian POW camp in 1945. That’s another parallel: three relatives of his former teammate Forsayth also died in Japanese prison camps (in New Guinea). One was his aunt Phebe Parkinson, who raised my father.

So how did Forsayth, the grandson of an American-Samoan woman who started a trading empire in New Guinea, end up playing rugby for Scotland? Heritage.

His grandmother Emma Coe, daughter of the American Consul to Samoa and a Samoan princess, married Scottish trader James Forsayth in Apia, Samoa in 1869. James Forsayth disappeared at sea soon after, leaving Emma with an only son, JMC ‘Coe’ Forsayth.

Emma left Samoa and established a trading empire in New Guinea from 1879. She would become known as Queen Emma and her exploits would inspire books and a movie. Her son Coe was educated at Newington College, Sydney, before helping his mother run the business from the famous Gunantambu bungalow at Ralum, near Kokopo, the current capital of the island of New Britain in PNG.

Coe had seven children. His second son Hector Heinrich Forsayth (his middle name was later changed to Henry) was born on December 18, 1899, less than two weeks before the turn of the century. Some records have listed Rabaul as his birthplace. This is wrong. Rabaul didn’t exist then and was only stablished in 1910. Forsayth was either delivered by a doctor in Queen Emma’s Gunantambu bungalow itself or Coe’s house just behind it on the Ralum plantation.

It is unclear what year Forsayth was sent to boarding school in Australia. It’s most likely that his early schooling, like my grandmother Dolly Parkinson and his other Parkinson cousins, was at the Catholic mission school at Vunapope in Kokopo.

But we know he later attended King’s and graduated in 1918.

Forsayth’s grandmother Emma had sold out her vast New Guinea enterprises in 1910 and died in Monte Carlo in 1913, leaving her vast wealth to son Coe. He moved his young family to a mansion at Vaucluse in Sydney’s establishment eastern suburbs and became prominent in social, yachting and horse racing circles. Probably because of his son’s rugby prowess – for King’s and the Combined High Schools team – Coe also inaugurated the JMC Forsayth Shield for the annual match between GPS and United (military) Services. The Forsayth Shield existed until the 1950s.

Rugby history records show how Forsayth chose to play for Scotland over England. In the book Rugger – The History, Theory and Practice of Rugby Football, the authors wrote that Hector Forsayth was “one of the finest fullbacks Scotland had ever had.” 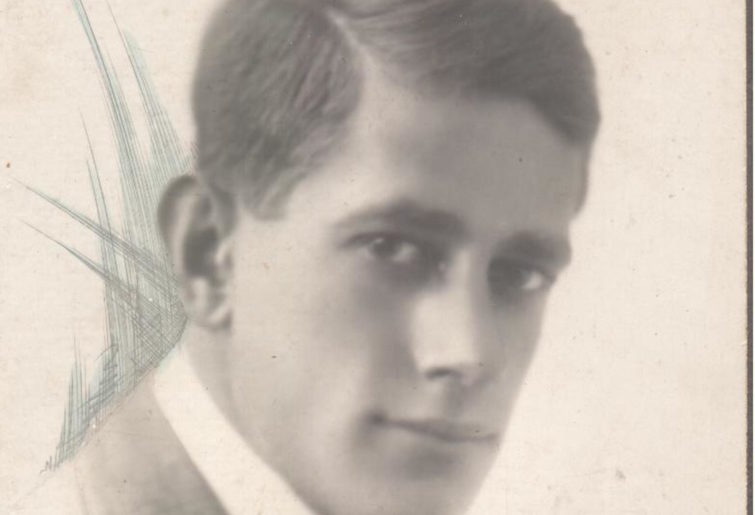 The famous Barbarians team – called the Harlem Globetrotters of rugby – is picked for flare and entertainment so we can assume Forsayth was an elusive and dashing running fullback.

A newspaper report from 1921 describes how King George was present for a game in which Forsayth starred for Oxford against old rivals Cambridge. One of his 1922 Oxford and Barbarians XV teammates was Tommy Lawton, who in 1929 would captain the Australian Wallabies to a rare 3-0 clean sweep series win over the mighty New Zealand All Blacks.

We have no way of knowing whether Scottish teammates Forsayth and Liddell were close off the field. I’d like to think they would have had a rapport based on their shared unusual backgrounds in comparison to the rest of their team. Liddell was an intellect and would have been fascinated by Forsayth’s stories of New Guinea, including how one of his uncles (John Coe) was killed and eaten by cannibals and his grandmother Emma nearly suffered the same fate after being hog-tied to a pole and carried away by warriors before being saved by her brother-in-law Richard Parkinson with his own praetorian guard of Buka islanders.

There are British Pathé newsreels showing King George V shaking Forsayth’s hand before varsity games and another that clearly shows Forsayth and Liddell sharing a joke at the team photo call before a game against Wales in 1922.

I am still trying to find out more about Forsayth’s life after he returned to Australia in 1923. We know it was a very different one to Eric Liddell. Both died young. Liddell died in the Japanese prison camp in 1945 aged only 43 and Forsayth drowned at Gladstone, Queensland in 1952 at the age of 53. He had served as a signalman in the Australian army in World War Two.

The Sydney Morning Herald, Thursday 17 June 1926
FORSAYTH-BAKER
The wedding of Miss Josie Baker, daughter of Mr. and Mrs. Langford Baker, of North Sydney, to Mr. Hector Forsayth, second son of Mr. and Mrs. J. M. C. Forsayth, of Vaucluse Hall, Vaucluse was’ celebrated on Wednesday night at the Church of England Grammar School chapel, by Rev. Davis. The bride wore a bouffant white satin frock trimmed with silver. Her veil was lent by her sister ln-law, Mrs. L. Falkiner. She wore a lace train and carried a bouquet of lilly-of-the valley, orchids, and hyacinths. There were two bridesmaids, Misses Edna Samuels and Ruth Baker. Their frocks were of apricot satin and gold lace, and they carried gold lace fans. Mr. Neville Goddard was the best man, and Mr. Grant Forsayth the groomsman. After the ceremony, a dinner party was given at the Australia (Club).

I began this research primarily because our daughter Isabella is currently studying for her doctorate in veterinary medicine at Edinburgh University – forever linked to Eric Liddell – and very glad that I did.

I discovered that Eric Liddell was so much more than an Olympic hero. When the war came, he evacuated his wife and daughters to Canada and stayed on to continue missionary work in China before being interned in 1941. It’s reported that Winston Churchill himself tried to get Liddell freed in a prisoner exchange with the Japanese – but Liddell refused and gave his place to a pregnant woman.

Conditions in Weihsien camp were harsh. Food supplies were short. Liddell himself was emaciated. But he was constantly looking out for his fellow prisoners, providing care and support. He arranged sports events, taught science using a home-made textbook, carried supplies to the old and sick, and ran a Sunday school for the children. He died a prisoner of a brain tumour with complications from starvation and exhaustion in February 1945. He is interred in the Mausoleum of Martyrs in Shijiazhuang, Hebei Province.

In August 2008, a poll in The Scotsman newspaper found Liddell was the most popular athlete Scotland has ever produced. Meanwhile, because he was born in China and died there, some Chinese sources claim Eric Liddell to be that country’s first ever Olympian, something that would no doubt please him greatly.

In 1991 the University of Edinburgh erected a memorial headstone, made from Isle of Mull granite and carved by a mason in Tobermory, at the former camp site in Weifang. The city of Weifang commemorated Liddell during the 60th anniversary of the internment camp’s liberation by laying a wreath on his grave.

The Eric Liddell Centre was set up in Edinburgh in 1980 to honour Liddell’s beliefs in community service while he lived and studied in Edinburgh. Local residents dedicated it to inspiring, empowering and supporting people of all ages, cultures and abilities, as an expression of compassionate Christian values.

There’s a modest plaque for Liddell at Edinburgh University. Isabella can pass it on the way to lectures and perhaps reflect on the connection between, and achievements of the two little boys from New Guinea and China who wore the dark blue of Scotland.