Who is Jonathan Sexton’s heir apparent?

Jonathan Sexton. No name has been more synonymous with Irish rugby over the last ten years.

There have been incredible milestones. Sexton has played over 100 Test matches, 95 times for Ireland and six times for the British and Irish Lions.

There have been the highs: a win over the All Blacks in Chicago in 2016 and a grand slam with Ireland in 2018.

Sexton was named World Rugby player of the year in 2018 as well, just the second Irishman to be accorded that honour.

Sexton is a fierce competitor who sets the highest standards for himself and refuses to accept failure, least of all from himself.

Sexton has said that he wants to play until he is 40. Perhaps though he should take a leaf out of Brian O’Driscoll’s book and retire while still close to his best.

Sexton will be 36 in July. He has taken many hits over the years with injury niggles curtailing his game time with Leinster this season.

Time is taking its toll, so perhaps Sexton needs to reconcile himself with the fact that his body may not be able to stand the rigours of Test rugby beyond 2021.

Foremost in the mind of coach Andy Farrell is finding Sexton’s long-term successor. While there have been several contenders over the last few years, no one player has yet stood up to stake his claim for the Ireland number ten jersey.

It’s a jersey that has been dominated by just two players throughout the 21st century: Ronan O’Gara and Jonny Sexton.

Joey Carbery (Munster), 25 years old – 22 caps
Joey Carbery burst on to the scene with a break-out 2015-16 season for amateur club Clontarf, before quickly moving into the Leinster set-up where his soft hands, brilliant footwork and deft game management marked him out as a player of exceptional talent.

With just a handful of Pro12 games under his belt, Joey Carbery made his Test debut off the bench against the All Blacks in 2016. Since then Carbery has continued to show at Test and club level that he’s a consummately gifted player.

Carbery moved to Munster in 2018, to get more game time at flyhalf, with Ross Byrne playing Leinster understudy to Sexton. But it has been a frustrating time with injuries, most recently with wrist and ankle problems. That limited Carbery to a solitary appearance for Munster in 2020.

If Carbery can stay fit and in form he is the natural successor to Sexton, but multiple long-term absences due to injury could well curtail his Test career.

Jack Carty (Connacht), 28 years old – ten caps
A gifted football player and GAA footballer, Jack Carty matured late as an flyhalf, only making the Connacht number ten jersey his own once AJ McGinty departed in the wake of Connacht’s Pro12 triumph in 2016.

Carty is a player who thrives on confidence and he has some lovely soft skills. Just last weekend, he put in a brilliant man-of-the-match performance for Connacht against Leinster, inflicting on Leinster their first Pro14 defeat over 18 months.

On the other side of the ledger, Carty can be inconsistent, error prone and go missing in matches. His last start for Ireland was in the disastrous loss to Japan in the 2019 Rugby World Cup. At 28, time may be against Carty, but on his day, he’s a delightful player to watch, and should go on to be a Connacht legend.

Burns has been a solid and very reliable performer with Ulster where his consistency and experience has caught the eye of Ireland coach Andy Farrell.

Burns made his first Test start against Georgia in the Autumn Nations Cup and though he scored a try, his performance won’t have convinced pundits that he’s the answer to Ireland’s conundrum at number ten.

Ross Byrne (Leinster), 25 years old – 11 caps
Ross Byrne has been consistently excellent with Leinster since he debuted in 2015. At 193 centimetres, Byrne is one of the tallest flyhalves in Europe with an excellent boot from hand and kicking tee and good game management.

Byrne has struggled so far at Test level. His first start in the ten jersey was against England in a pre-Rugby World Cup friendly in August 2019. Ireland were badly beaten with Byrne accounting for several errors and being replaced after 54 minutes.

Byrne has had other opportunities at Test level since, but he has been solid if unspectacular. Byrne certainly has the size for Test rugby, but whether he has the skills and temperament remains to be seen. 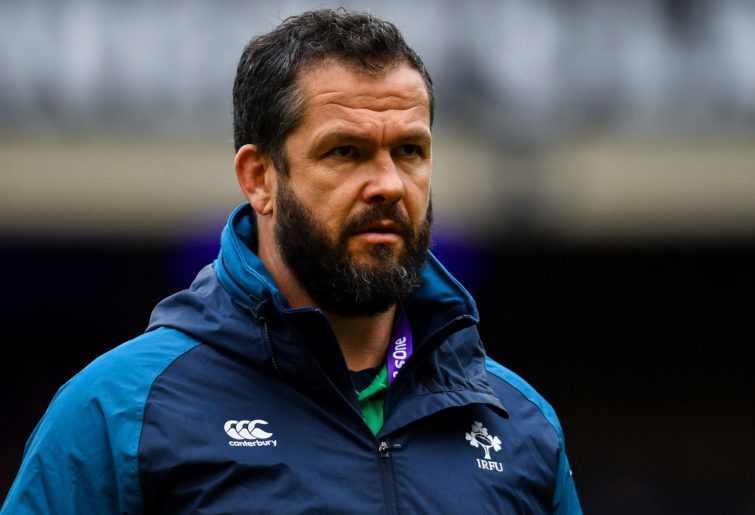 Who will Andy Farrell select? (Photo By Ramsey Cardy/Sportsfile via Getty Images)

Harry Byrne is perhaps a little more in the Sexton mould, taking the ball to the line, confidently running creative and innovative attacking plays. Harry Byrne’s game management and decision making stands out. He has his fans, among them Brian O’Driscoll no less, who believes the younger Byrne is the better player.

Ciaran Frawley (Leinster), 23 years old – 32 Leinster appearances
Ciaran Frawley is one of my favourite emerging Leinster players. He is a tall, elegant flyhalf with balance and skill.

An intelligent player, brilliant passer and with an educated boot, Frawley has been playing inside centre this year due to injuries in the Leinster camp. Frawley can play fullback as well, so his versatility and overall skill set marks him out as a future Test player.

Ben Healy (Munster), 21 years old – ten Munster appearances
Munster have had their best season in years and Ben Healy has been a key contributor. Healy is a future Test star.

Tall and graceful with an ice-cool temperament, a big boot and mop of red hair, he reminds me of legendary Ireland flyhalf Ollie Campbell. With another season of Pro14 and Heineken Cup rugby under his belt, Healy could well move into pole position in the chase to become Sexton’s successor.

This challenge for the top brains of Irish rugby is a beguiling one. It’s not as if there is no talent to replace Jonathan Sexton, rather that Joey Carbery is injured, some like Ross Byrne and Billy Burns are stalwarts, while others like Ben Healy and Harry Byrne are too raw and inexperienced.

What makes the conundrum even more intriguing is that there are several players in addition to those I’ve profiled who are contenders as well: experienced Munster flyhalf JJ Hanrahan, Munster rookie Jack Crowley who excelled at Ireland under-20 level last year, Jake Flannery is another Munster and Ireland under-20 star, Leinster and former Ireland under-20 captain David Hawkshaw, brilliant young Ulster utility back Michael Lowry, and the list could go on.

It’s a wonderful problem to have but hopefully coach Farrell and high performance director David Nucifora can set the best talent in the right direction for Ireland to discover their next world-class pivot.