The blockbuster trade comes a day after Harden’s comments to the media where he publicly disrespected his team.

“We’re not even close, honestly, to that team – obviously the defending champions – and all the other elite teams out there,” Harden said. “I mean, you can tell the difference in these last two games.

“We’re just not good enough – chemistry, talentwise, just everything. And it was clear these last two games.”

While the base trade would indicate that Brooklyn won the trade, considering they got the best player out of the deal. However, the Nets cut into their depth and future for one guy. Granted, Harden is one of the best scorers ever and one of the top five players in the game currently. However, players such as LeVert and Allen were a part of what made this Nets team so deep and talented.

With the injury to Spencer Dinwiddie and the loss of Allen, the Nets are going to struggle tremendously on the defensive end of the court. Another question from the trade is whether Irving and Harden will co-exist as primary ball handlers. It may have been wise for the Nets to try and trade Irving for Harden, as they would not have sacrificed nearly as much of their depth.

We have also seen the Nets trade an excess of first-round picks in the past attempting to make a dynasty. That did not turn out well.

However, Brooklyn have taken the gamble, which could pay off the create one of the most deadly and feared teams in the league. On paper, they will look brilliant as they have two of the best scorers in the game.

While Harden’s numbers are down this season, he is still averaging a double-double (24.8 PPG and 10.4 APG) and will work well alongside Kevin Durant, who flourished in Golden State surrounded by other great scorers such as Stephen Curry and Klay Thompson.

Durant is currently averaging 29.9 PPG, 7.8 RPG and 5.8 APG, as he has returned from his Achilles injury looking like his former self. Durant is playing at an MVP level, and adding Harden (in an OKC reunion) alongside another deadly, if not the deadliest scorer in the NBA spells trouble for the opponents on the offensive end.

If Irving returns to the Nets and is able to coexist with James Harden, the Nets will certainly be the massive winner of this trade in the short term.

Meanwhile, while the Nets pulled the trigger on the trade to further their championship aspirations, the Rockets Adding Oladipo helps fill some of the void in the shooting guard position, creating a nice backcourt pairing of John Wall and Dipo. The Rockets have a very interesting young team, and while they will likely miss the playoffs this season, they could develop nicely.

Another point to mention is Victor Oladipo’s expiring contract. The motivation behind the Rockets trading for Oladipo could be in the hopes that he will leave the team and give them some cap space. However, this does not fit in with their addition of John Wall, who will not want to stay with a losing team. Plus, his $40 million USD per year contract will turn off any potential suitors. 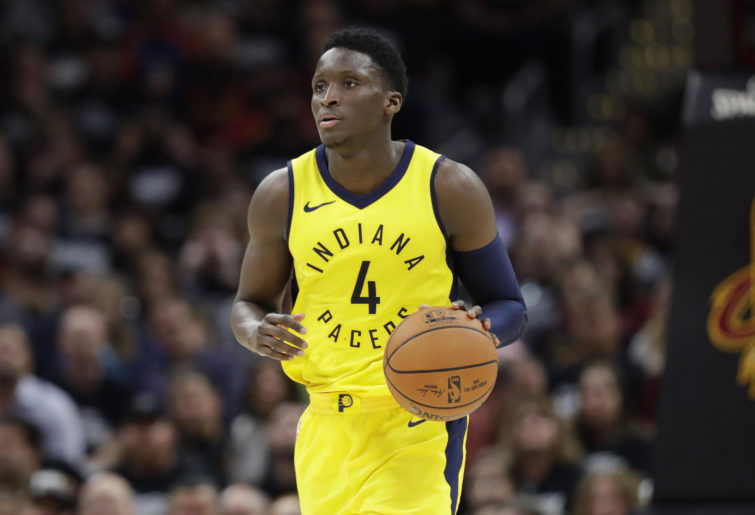 The best part of the trade for the Rockets are the draft picks. As they are all unprotected, they could hit a king’s ransom like the Celtics did back when Brooklyn traded all those picks for Kevin Garnett and Paul Pierce.

While the Rockets may look like they traded Harden away for not much at all, considering Ben Simmons was reportedly an option from the Sixers, the Rockets seem to be playing the long game in terms of stocking draft picks. The Thunder have done a similar thing after losing Paul George and Russell Westbrook. It is a risk, but for teams who may struggle to build through the free agency, it is a smart move.

The Rockets may be short-term losers of this trade, however, they are playing the long game and may find some gems with the selection of draft picks. Plus, Dante Exum is a decent pick-up as well.

As for the Cavaliers, they picked up an underrated centre in Jarrett Allen. Prince also is serviceable off the bench, however, adding Allen is interesting. The Cavs already have Larry Nance Jr, Andre Drummond and JaVale McGee fighting for frontcourt minutes. Could we see one of these players be traded in the near future?

Drummond has been having a good season averaging 18 PPG and 15.1 RPG. However, could the Cavs look to ship him off and play younger? Drummond’s contract expires at the end of this season and the Cavaliers could look to send him elsewhere. Either that, or they could be preparing for him to leave in free agency and want Allen to join their young core.

The Cavaliers did well by adding Allen to a core of Collin Sexton, Darius Garland, Kevin Porter Jr and Isaac Okoro. However, the fit of Allen beside Drummond is poor at best. It will be interesting to see what the Cavs do about this, as they sit with the most questionable move from the four teams involved.

Finally, the Pacers made a good swap in trading Oladipo for LeVert. LeVert has been balling for the Nets in the absence of Kyrie Irving and he provides a lot of what Oladipo could provide (and arguably more). He is also on a more team-friendly deal and will take advantage of being the Pacers’ main ball handler.

LeVert has been averaging 18.5 PPG, 4.3 RPG and 6 APG coming off the bench mostly for the Nets. He led the second unit well and became a primary go-to guy both when Irving and KD were out, and last year when Irving was injured. If LeVert can get going for the Pacers, the team surely wins the trade overall. He is an upgrade over Victor Oladipo, who had been rumoured to want to leave to another team.

While Oladipo has been averaging 20 PPG and around 6 RPG, he has struggled to return to the level that made him an All-Star when he first joined the Pacers. Putting the young LeVert on a team with Domantas Sabonis, who has been an MVP candidate this season (21.8 PPG, 12.5 RPG and 5.8 APG), Malcolm Brogdon and Myles Turner creates a nice young talented core for the Pacers to build around.

LeVert certainly has more upside than Oladipo in this stage of their careers as the Pacers look to continue contending and think LeVert is a better fit. He fits into their timeline and their young core and makes the Pacers an interesting team to watch. They get a definite upgrade without giving up much at all.

However, no matter how this four-team monster trade turns out for the teams involved, it is certain that this move will shake up the fabric of the NBA.