The team performed poorly under coach Darryl Gibson, who left in 2019 after an underwhelming couple of years with the former All Black at the helm.

The 2020 season brought a new coach and fresh philosophy in the shape of wily Cantabrian Rob Penney. Penney promised new attacking plays and improved defensive structures, in the hope of better performances.

The Waratahs missed a place in the 2020 Super Rugby Australia playoffs, but not by much. At Test level, loosehead prop Angus Bell won his first Wallabies cap at the tender age of just 20, Jake Gordon received a Wallabies re-call, while Ned Hanigan answered his critics with some of his best performances in a Wallabies jersey.

Who’s departed?
One of the biggest challenges for the Waratahs is their inability to hold on to playing talent. The squad is routinely drained and restocked on an annual basis. Player continuity within teams is the bedrock of skills development, good communication and synergy. Unless the Waratahs management can address this issue, their ability to challenge for silverware will continue to be thwarted.

The Waratahs have been stripped of up to 20 players from their 2020 roster. In contrast, the Brumbies have lost just three senior players – Tevita Kuridrani, Lachie McCaffrey and Joe Powell – with only McCaffrey heading overseas. The Reds’ squad appears to be largely unchanged, plus they have the addition of exciting NRL recruit Suliasi Vunivalu.

Whetton, aged 28, has been a something of a rugby globetrotter, playing for the likes of Leicester and Leeds in England and the Highlanders in Super Rugby. Whetton, who is a competent lineout operator, has the potential to be a vital player for the Waratahs.

Former Western Force stalwart Sam Wykes is another recruit. Wykes joins after a sojourn with the defunct Sunwolves franchise and hopefully can bring some much-needed experience to the Waratahs’ pack.

The 24-year-old Northland and former junior All Blacks second rower Sam Caird is an intriguing recruit. The athletic second rower was a member of the Blues’ Super Rugby squad in 2020 but didn’t make his debut.

At 202 centimetres and 116 kilos, Caird has the physical presence required for Super Rugby. With a good work rate in defence and agile skills in the lineout, Sam Caird should be a regular starter for the Waratahs in 2021.

In the backs, exciting Eastwood pivot Tane Edmed has joined the Waratahs after a standout Shute Shield campaign in 2020. His battle with Ben Donaldson to be Will Harrison’s understudy should be an interesting one.

The big news is that former Reds protégé Izaia Perese has signed with the Waratahs. A one-time Wallabies tourist, Perese left the Reds in late 2018 for a shot at NRL glory with the Brisbane Broncos. Perese had a troubled time during his brief NRL career before signing for French Top 14 club Bayonne in mid-2020. Hopefully Perese, who is still just 23, can get his career back on track.

Emerging talent
For some of the existing Waratahs players, 2021 is an opportunity to hit their straps and push for Wallabies selection. Hooker Tom Horton had an excellent debut season in 2020. He’s a hooker with good core skills and is useful in the loose.

Harry Johnson-Holmes struggled after swapping sides of the scrum from loosehead prop. Hopefully the off-season has been an opportunity for him to hone the dark arts of tighthead play, with improved scrummaging skills and physicality in the tight exchanges. 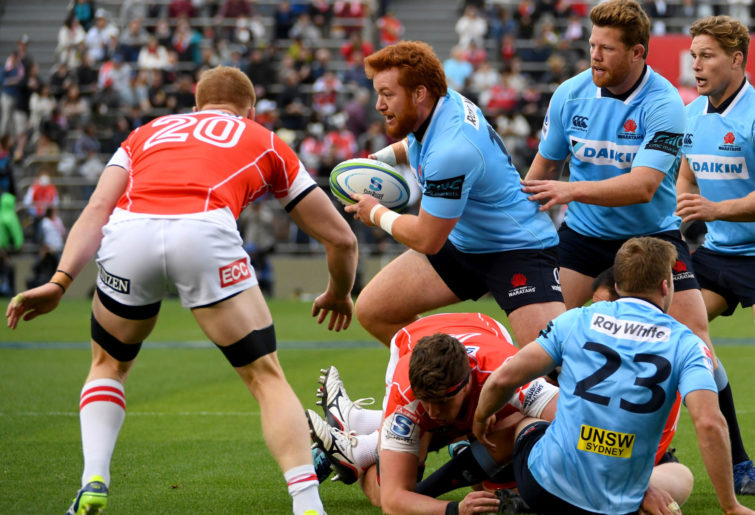 Will Harris is a rangy back rower with size and strength. He has been compared to legendary Wallabies number eight Tim Gavin. This could be the year Will Harris features regularly for the Waratahs and shows some fulfilment of his prodigious promise.

Lachie Swinton had an excellent 2020, capped with his first Wallabies start and also his first red card at Test level. Swinton is an old-style blindside flanker who thrives in the physical exchanges and defensive battles.

However, Swinton needs to make his tackles consistently lower and take more responsibility for ball carrying. Swinton has the potential to be the Wallabies’ first choice number six if he can nurture his strengths and eliminate the high shots.

Much responsibility for the Waratahs’ performances will be on the shoulders of flyhalf Will Harrison. While he brings good hands and brilliant goal kicking, his game management will be crucial if the Waratahs are to thrive in attack.

Big things will be expected from former gymnast turned winger James Ramm and Gordon centre Joey Walton, standout rookies in 2020 who brought added skill and invention to the Waratahs’ back line.

Challenges
The biggest concerns for the freshly minted 2021 version of the Waratahs is a lack of experience in the player stocks. The current squad contains just eight Test players. In contrast, the 2019 squad boasted no fewer than 16 Wallabies.

Players with more than a few years of regular Super Rugby experience are few and far between. Besides those capped for the Wallabies, there is Alex Newsome, Lalaki Foketi, Perese, Hugh Sinclair, Wykes and Robbie Abel, hardly a cadre of household names.

Rob Penney has an inexperienced squad to work with in 2021. (Photo by Mark Kolbe/Getty Images)

Hopefully, a reservoir of untapped talent emerges from the Gen Blue graduates, and last year’s rookies can kick on. But if the Waratahs have a bad run of injuries, then their lack of big-match experience could be exposed.

Summary
A coach’s first season in charge can usually be put down to experience. He inherits a squad not entirely of his own choosing. The players are learning a new playbook, while building trust and rapport takes time.

After the latest player clear-out, this is a squad of Rob Penney’s own making and hopefully he can mould them according to his own rugby vision and unearth some future stars.

However, the group appears to be short on experience and proven big-match temperament. For the sake of long-suffering Waratahs fans, I hope I’m proved wrong, but I suspect that both the Brumbies and the Reds will have too much class for the Waratahs to seriously challenge for Super Rugby honours in 2021.