If you were to read only the match report on the A-League website, you wouldn’t even know the Jets were denied what looked like a clear-cut handball in time added on yesterday afternoon.

Aleks Susnjar clearly handled Lucas Mauragis’s cross into the box deep into stoppage time, only for Abraham to correctly rule out Newcastle’s appeals for a penalty.

“Waved off because it came off his own leg up onto his hand,” said Brenton Speed on the Fox Sports commentary. “Immediately Ben Abraham says no penalty.”

It was the right decision from a referee who had an excellent game overall, if only because the International Football Association Board – the governing body that writes the laws of the game – recently changed the handball rule so that it’s not an offence if “the ball touches a player’s hand/arm directly from the player’s own head or body (including the foot)”. 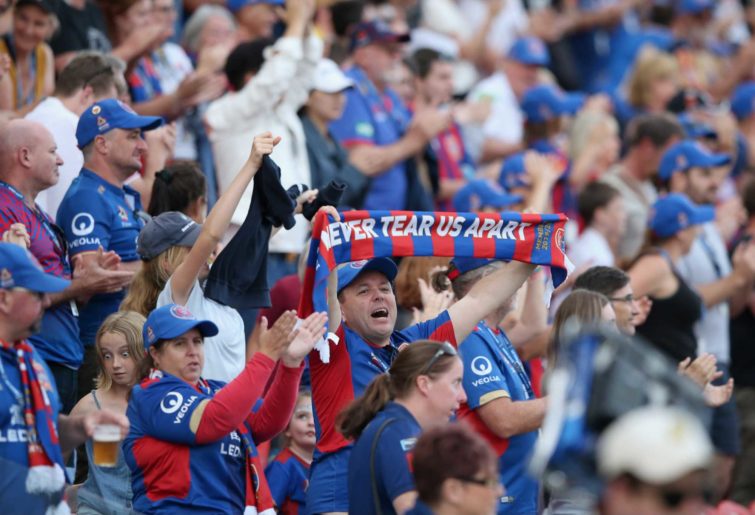 It may have looked like a penalty, but Abraham made the only decision available to him.

Which is a shame, because the Jets deserved something from a second-half fightback in which they out-muscled a Macarthur side that had run out of steam by the hour mark.

The only problem for Jets coach Craig Deans is that they were already 2-0 down by the time they got into the game.

They were a bit unlucky when Jason Hoffman’s goal was chalked off by VAR – even though the Jets winger was clearly offside – but as soon as Matt Derbyshire opened his account for the visitors with a bullet header from a corner, it looked like it was game over already.

That was until Valentino Yuel pulled the scrappiest of goals back just before halftime to set up a barnstorming second-half display.

Yuel’s goal will do plenty for the youngster’s confidence, even if it was Roy O’Donovan who could probably have done with the morale-boosting strike.

Sideline analyst Mark Bosnich was spot-on when he said O’Donovan’s substitution with just under 13 minutes remaining took much of the momentum out of Newcastle’s attack.

But while the Jets look short of depth, they were well supported by the COVID-affected crowd of just under 4500 who turned out on a glorious afternoon in the Hunter.

One wonders if the same could be said, even at this early stage of their existence, of Macarthur FC.

The newcomers will be well served by Loic Puyo’s spectacular first goal in Macarthur colours because the Frenchman’s improvised scissor kick is the sort of highlight that often goes viral on social media.

But watching the game on Fox Sports with the phone in one hand and TV remote in the other, it was noticeable just how few people were talking about the game on Twitter.

It attracted a few more comments on Facebook and a couple of other corners of the internet, but on the whole Macarthur’s social media presence has been a bit of a slow burn.

Which is pretty much in keeping with the way the club has been set up from day one.

On the pitch they look like they’ll give the top six a serious crack this season. Off it, much of the work they’ve done to connect with fans has been done locally and with little fanfare.

That’s not necessarily a bad thing – and this infernal pandemic has hindered marketing efforts across the league – but it would be a shame if a few more fans don’t switch on to what an entertaining side Macarthur look like being.

They’ve got Campbelltown and Sydney’s south-western suburbs pretty much to themselves.

And with a fortnight to go before their next home game against defending champions Sydney FC, here’s hoping they can win over a few more fans to what has been an impressive start to their life in the A-League.