The former Knights half has been signed by Queensland Cup club the Sunshine Coast Falcons, after spending four years on the sidelines for using performance-enhancing drugs.

His time away from footy has been well documented, with Mullen having had a fairly substantial run-in with the law for supplying cocaine, as well as being treated for an addiction to the devil’s dandruff.

But after hitting rock bottom after overdosing in December 2018, Mullen has rebuilt his life to the point that Queensland Cup officials are “comfortable with Jarrod’s registration”.

“He has obviously made some mistakes which he has moved on from and we believe he can use those learnings to make a positive impact, particularly in the wellbeing space,” QRL managing director Rob Moore told the media last week.

It’s one of the rare occasions where such words are more than just empty platitudes, because Jarrod Mullen has a lot to offer.

Having made his first-grade debut at the tender age of 18 in 2005, Mullen was the first young Novocastrian to be given the tag of ‘the next Joey’ after Andrew Johns retired in 2007.

Mullen appeared on track to live up to the hype when he was selected to play for NSW in the opening match of the ’07 State of Origin series but he was dropped for Game 2 and never again wore the sky blue.

Ultimately, it was indicative of how his career in the Hunter was to play out – starting strong, before ending in disappointment.

Nonetheless, he was still one of Newcastle’s best-paid player – rumoured to be on close-to a million a season – when he was busted in November 2016 and sent packing from the club he had been a member of for nearly two decades.

That story alone is one that young players would do well to heed. Junior stars are told how few of them are likely to make it to the NRL, let alone forge a decent career out of footy once they get there.

But Mullen shows that, even if you do rack up 200-plus games, your choices can still have life-shattering consequences.

Mullen was the bloke who had all the talent and promise, who made the senior rep sides, who was banking serious coin, yet made a poor decision and was left to put food on the table by working as a labourer.

And that’s to say nothing of the first-hand insights he can pass on about the dangers of illicit drugs, which saw him almost banged up and – far scarier – nearly die.

His lessons have been hard learnt but by passing on this wisdom, he could help youngsters teetering on the precipice from making similar mistakes. 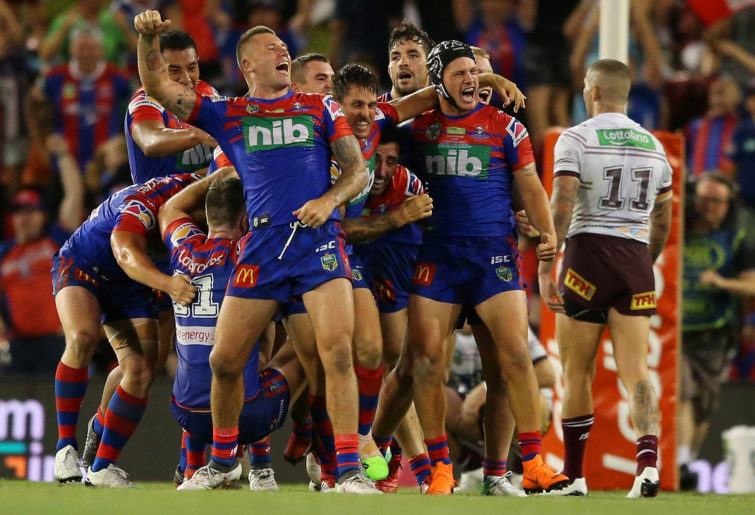 Of course, having played 211 NRL matches, including seven finals matches, as well as Origin footy, he’d have some decent pointers for his teammates on the field as well.

He is aware of this as well, having said a goal of his for this season is “to help the young kids come through and if they can learn from any experiences from me and (give) any advice they need”.

As for his long-term plan? Distant dream though it may be, the 33-year-old wants to get back to first grade.

“I’d be lying if I said I didn’t have a goal to play NRL but at this stage I’m not eligible,” Mullen told reporters last week.

“I’ve got to earn my stripes back through Queensland Cup and play some good football here and we’ll see what happens after that.”

Word is the NRL won’t consider allowing him to play until 2022, which I’m a bit miffed by – his four-year ban expired on Sunday, is another 12 months really necessary?

But it is intriguing that the Falcons are a feeder club for the Storm, where Cooper Johns – the son of Matthew and nephew of Andrew – is the back-up half.

That said, given Mitchell Pearce’s recent turmoil, if Mullen were to have a strong season on the Sunshine Coast, there will inevitably be whispers of a fairytale return to the club where he played his entire NRL career.

Logic would suggest too much water has passed beneath that bridge and that perhaps both the club and player would feel it best to leave the past in the past.

But when it comes to second chances in rugby league, when has logic ever played a role?