It’s a stat most would scoff at and say it’s irrelevant but try telling that to Australia’s bowlers after the series we’ve just witnessed.

Only one batsman – Marnus Labuschagne – has faced more balls in Australia than Pujara in the last three years.

He’s now blunted our bowlers for 2657 deliveries in three tours down under. It’s had the desired result of emptying the tank of the Aussies just like the original wall, Rahul David, used to do.

They were of course proven wrong.

Pujara ducked, weaved, and weathered the storm. He propelled blow after blow to his head and body but was able to immediately focus and get in behind the next delivery like nothing had happened.

Tradies and businessmen who snuck off work to make the most of the free tickets at the Gabba cried for the Indian to “get on with it”. 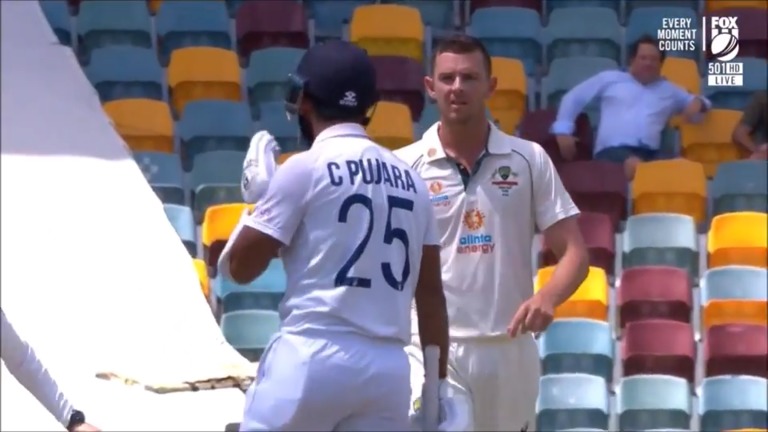 Josh Hazlewood stares down Pujara after hitting him in the head

His determination eased the nerves in the dressing room and allowed more scoring opportunities down the other end as the bowlers tried desperately to get wickets on the fifth day.

For every ball Pujara survived, India’s chances of losing the match diminished and the fast bowling trio of Mitchell Starc, Josh Hazlewood and Pat Cummins suffered the psychological blow of not being able to find a way through India’s wall.

It wasn’t as if he was focused purely on survival.

In between all the dot balls, he took care of the rank deliveries and was no doubt a calming influence for young gun Shubman Gill, who scored a crucial 91.

He had batted for a tick over five hours and ensured India would, at worst, draw the game.

His innings created the opportunity for Rishabh Pant to go on and push for the win – attacking Australia’s weary bowlers who were both physically and mentally drained.

It was once again a brilliant tactical performance from an Indian side which was missing so many of their stars.

In the modern era, when Twenty20 cricket is taking precedence on the cricket calendar, a Test specialist like Pujara is rare.

What the SCG and Gabba Tests show is that a slow, old-school batsman can still work in the modern game.

Pujara was the glue that held the innings together.

In 50 years’ time, people will look back on his series batting average of 33.87 and wonder what all the fuss was about.

Runs are of course what matters. India scored 329 of them to win the most remarkable Test. It was the variety of attack and defence which allowed the impossible to be achieved.

Batting time is an art and we’re very lucky to have a master in Pujara to show that this skill is just as important in the 21st century as it was in the 19th.