The season begins with the traditional Thursday night game between last year’s premiers and the improving Blues at the MCG on March 18.

But those statisticians among us can hardly wait to see the next chapter of traditional and historical achievements be established, equaled or broken as another season unfolds.

Will the Tigers’ juggernaut extend its record unbroken sequence of wins against Carlton to 11, and equal the best current winning sequence by any team over another?

At the end of the home-and-away season last year, Richmond had the best current winning sequence against any one team in the league, having beaten Brisbane on 15 straight occasions. But that all went pear-shaped with a loss to the Lions in the first week of the finals, so the counter was reset to zero.

Round 21, 2013 was the last time that Carlton beat Richmond. Mick Malthouse was coach and the win by ten points squared the ledger with Damien Hardwick in Richmond-Carlton games at one win apiece.

Two further attempts by Malthouse, one by John Barker, five by Brendon Bolton and two by David Teague have all proved unsuccessful since, but times are changing.

In the first win of the current Richmond sequence, Carlton had only two of their current playing list in the team whereas the Tigers had already recruited the eight players who are now top 100 champions under the coaching of Damien Hardwick.

All eight players were in that team that started the current period of Tigers domination and they have been the backbone of the winning sequence ever since. 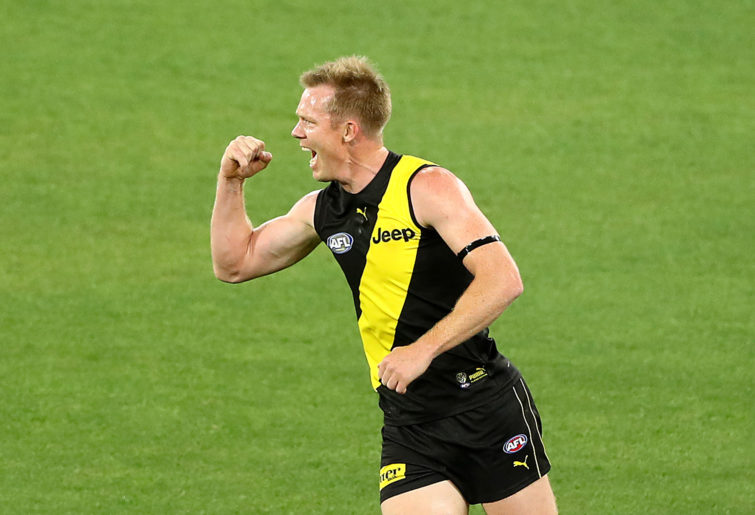 Jack Riewoldt is one of those eight players. (Photo by Robert Cianflone/Getty Images)

These eight players have now been together for so long that four of them now appear in the top 20 game players of all time at the club, and two more are inside the top 50.

In this rarefied atmosphere it is no surprise that their games record is now impacting on some of the greatest names that have played for the club over its 114 years in the competition.

Shane Edwards will pass Joel Bowden – who was still at the club when Edwards started in 2007 – and become the 11th greatest game player at Richmond.

Trent Cotchin – who already holds the record for most games as captain at the club – will surpass the games total of one of the greatest AFL legends of all time in Kevin Sheedy.

Two other former captains, Roger Dean and Roy Wright, will be equaled by Dustin Martin (who will pass present CEO Brendon Gale) and Bachar Houli respectively, and Dylan Grimes will equal the games record of Andrew Kellaway.

The AFL’s traditional highlight of Round 1 will hopefully be Eddie Betts’ 200th game for the Blues, joining Michael Sexton on this number, and being the 37th Carlton player to reach that landmark.

Ed Curnow will join former Blue Cresswell William ‘Mickey’ Crisp on 183 games while Levi Casboult will pass Alex Duncan. Duncan was born in 1900 and was a star at Carlton in the 1920s, so much so that one match was remembered as “Duncan’s match”.

Collingwood, a club not generally known for magnanimous gestures towards its opponents, were so impressed with Duncan’s outstanding performance (perhaps, even, a best of all time performance) that they had the match ball suitably mounted and inscribed and presented the trophy to Duncan.