Leading by 22 points in the second quarter of a grand final, things looked to be going swimmingly. But then a 50-point turnaround which led to a 30-point put a halt to their quest for their elusive tenth premiership.

Now the Cats have one last chance to win a flag before an inevitable rebuild will be forced – nearly all of the 2011 premiership side have vanished and very few current players will be present the next time they will lift the cup.

The current squad has an indication of premiership or bust for Geelong in 2021. Overall in 2020 Geelong has the third-highest average squad age, coming it at 26.2 years old. The Cats are the equal oldest team to take the field in the AFL era. The average age of the oldest Geelong 22 that took the field this year is 28.9. It’s no surprise that this is true, as if you look at the core group of their squad, they are all coming to the twilight of their career.

Tom Hawkins
Despite having one of the better seasons of his career, the tomahawk will end the 2021 season as a 33-year-old and his attempt to play sustained and constant senior footy at a high level may be past him, especially with the arrival of Jeremy Cameron. Can they both coexist in the same forward line?

Joel Selwood
He too will end the season as a 33-year-old but didn’t quite have the impact that Hawkins did in 2020. Not an outstanding season by his standards, and despite being an absolute lock for this side in 2021, his days might be numbered. The skipper would certainly look to end his career how he started it. 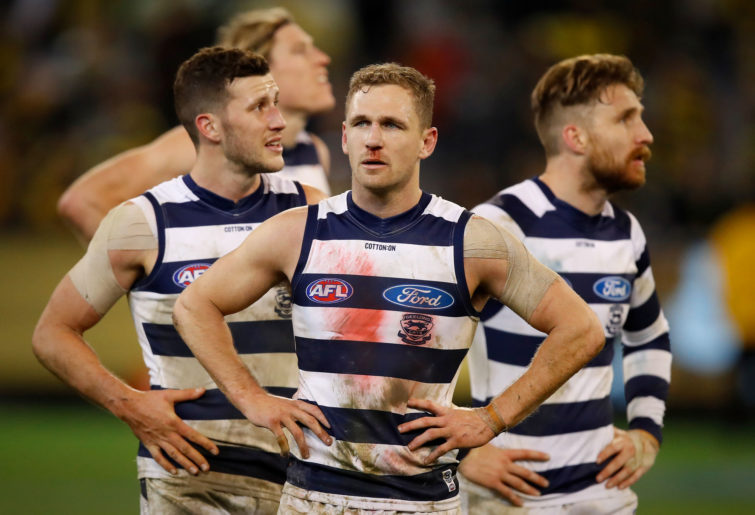 Rhys Stanley
The big ruckman has had an interesting AFL career, displaying elite athleticism and stamina as well as being good around the ground. However, his ruck craft has drastically decreased over the years, with this year being especially poor. He was below average in both hit-outs and hit-outs to advantage.

Zach Tuohy
The running halfback showed much of the same in 2020. His elite kicking is always a feature and he’s a surprisingly underrated as a lockdown defender. But the 31-year-old is running on empty as he is trying to squeeze the last out of impressive AFL tenure.

Gary Rohan
He’s the definition of a pressure forward who kicks goals. He’s very rarely high in possession but is always giving it his all, and he doesn’t look to be slowing down with age. But with how physically demanding his role in the side is, how long can he do it at an elite level?

Mark Blicavs
The lockdown defender with extremely good ball use has had a shining 2020 season, having taken the job of the No. 1 forward nearly every week and doing it very well. However, turning 30 before the start of the season, how long can he maintain this level of performance?

Granted, these players might not be the be-all and end-all of the Geelong Football Club. However, they have been integral to the way they have played for a long time and this instinctive cohesion has gone a long way into the success they have managed to build.

All these players will be 30 by the end of next season and will be entering the twilight of their careers. How long can they continue to perform at an elite finals level without hindering the development of the younger crop of players coming through?

When looking out to identify a club ideology going forward, the recruitment strategy is a very good indication, and when looking at Geelongs ins and outs it’s clear to see the way they are approaching the future.

Over the last few off-seasons the Cats have made space for some older and more experienced players in the hope of instant success.

Josh Jenkins
I think it’s a unanimous verdict that this move hasn’t worked. The 31-year-old has played one game for Geelong in the only year he has been with the club and he isn’t breaking the door down to start in 2021.

Issac Smith
Hawthorn to Geelong was a very controversial move with the aim of instant success. He has the quality and no doubt he is a very good footballer, but how many miles does he have left in the tank?

Shaun Higgins
The rough and ragged 32-year-old inside midfielder had a standard 2020. Rarely outstanding while never disappointing, Geelong knows exactly what they are getting into when buying into the consistent midfielder for one maybe two years.

Getting three players over two seasons aged 31 or over shows the short-term success plan that Geelong are implementing. Further, getting rid of young players like Lachie Fogarty to Carlton and Nakia Cockatoo to Brisbane and offloading three first-round picks for Jeremy Cameron is another indication that they have put the eggs in the 2021 basket.

Is there a future?

There is a future for the Geelong Football Club. They still have quality young players who will carry the next generation once the old guard passes the torch. The likes of Gryan Miers, Jordan Clark, Brandan Parfitt and Mark O’Connor will have very bright futures and the Cats will have success down the line.

But in the meantime it may take a couple of years of suffering should they complete their aim and get that tenth flag in 2021.