Roger Tuivasa-Sheck could be on his way out from the New Zealand Warriors, and the game of rugby league in general.

Reports have been floating around for years that his end goal was always to make the move back to the sport he played growing up, and vie for an All Blacks jersey.

The move may come as a surprise to many, but many within the Warriors camp and even in the opposing sport predicted a change would come for Tuivasa-Sheck.

With the pending move over to such a talented and full squad, the question needs to be asked: where will Tuivasa-Sheck fit in to the All Blacks’ plans?

From a stature perspective, and skill-based scenario, Tuivasa-Sheck suits the mould of a rugby fullback, or possibly a right wing.

With the All Blacks in the past years, the left-wing position (11) tends to be the power runner, and the right hand side (14) tends to be a more skilled, second fullback-based position.

Assuming that is correct, Tuivasa-Sheck would be looking at either jersey 14 or 15.

A quick scan of the All Blacks’ stocks in that position, and it asks the question, will he be good enough to take one of those jerseys?

Look at the current crop of outside backs for those two positions: Beauden Barrett, Jordie Barrett, Sevu Reece, George Bridge, Rieko Ioane and Will Jordan to name a few. 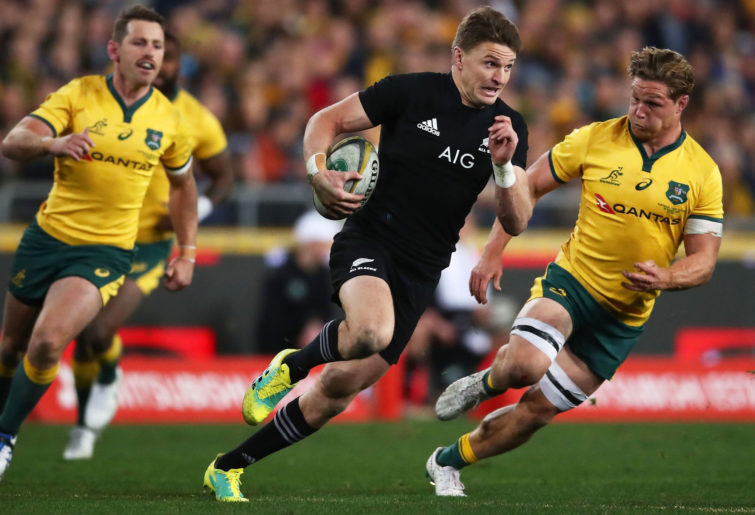 Now, I will go out on a limb and say as talented and skilled as Tuivasa-Sheck is – and I am a big big fan of him – I cannot see him overtaking the majority of those players in a two-year scenario.

Here is what I pitch for Tuivasa-Sheck: 13, the centre position, is where he should try and earn his mark.

The All Blacks’ midfield has been in a bit of disarray since the legendary pairing of Ma’a Nonu and Conrad Smith. A few combos were due the opportunity to take over, but to no avail. The midfield is still very much up for grabs.

The generic build of a 12 tends to change a lot. For me growing up, 12 was a robust runner, who would just hit the line as hard as he could, and keep doing it all game. The game has changed where a 12 now can essentially be a second play-making option, but still have that running flare about them.

The typical 13 now is very different. Usually they were very sound defenders, who can read defensive lines fairly well, and may take a few cut-out hit-ups off set plays.

Currently, however, there are a few 13s who stand out, none more than fellow league convert Semi Radradra and English import Manu Tuilagi. Both of them can hit a line very well and run great angles. Both are strong runners of the ball, and can slightly manage to handle themselves on defence.

The All Blacks were using Anton Lienert-Brown for the majority of the year at 13, with the idea of Jack Goodhue also. Both can run good lines, with the former being a better defensive player.

With many pundits asking for Lienert-Brown to come off the bench to provide that awesome spark he does, the midfield tends to be wide open.

Tuivasa-Sheck can survive at 13 for many reasons.

He suits the Conrad Smith mould a lot more than the Radradra or Tuilagi mould. He is a strong runner of the ball, runs great lines from the fullback position in league, and can read and tackle very well.

Can you imagine running a set play off of a scrum, with a teammate throwing a cut-out ball to their centre Tuivasa-Sheck, who can use his footwork prior to hitting the line or his speed? Scary.

He would need to sharpen up his reads, as he will be defending from the front line, more than the back like in league. But his footwork, pace and toughness could really make him a match-up nightmare for opposition 13s.

Irish legend Brian O’Driscoll – who was named the 13 of the last decade – and I daresay his runner up, Conrad Smith, both had similar styles of play. They did not have the biggest frame like Tuivasa-Sheck, but perfected their craft.

They tackled well, ran hard and good angles, and never altered from that. They both adapted to a few grubbers for their outside men, but both tended to stay within their lanes.

Tuivasa-Sheck should follow their mould, perfect his defensive reads, use his God-given abilities in pace and footwork, and he can definitely make a run for a vacant 13 All Blacks jersey.

If Nehe Milner-Skudder can make the All Blacks’ squad in one full year of rugby, so can Tuivasa-Sheck.

Bring him into black.