Bernie Ibini twisted the knife with a goal against his former club Newcastle before the Jets salvaged a point from the penalty spot in their 1-1 A-League draw against Western Sydney Wanderers.

Ibini bagged his first goal of the season and was a constant threat in the first hour at a wet Bankwest Stadium on Friday night.

After the loss of key forward Nicolai Muller to a leg injury in the 33rd minute, the Wanderers could have started kicking stones – instead they kicked things up a notch.

Substitute Simon Cox made an instant impact just minutes later, beating two defenders on the edge of the box and firing a shot that hit the post.

The ball sat up beautifully for Ibini who slotted the rebound past Jack Duncan for his 33rd A-League goal.

After an acrimonious departure from the Jets – Ibini reportedly paid out seven months of his contract to leave the club – there was never likely to be a humble acknowledgement of his first goal against his former team.

“I got a bit of stick last time I was up in Newcastle, so it was only right that I celebrated.”

But the good times weren’t to last for the hosts.

The slightest of touches from Patrick Ziegler in the box on replacement Luka Prso resulted in a penalty and Roy O’Donovan stepped up to equalise in the 81st minute. 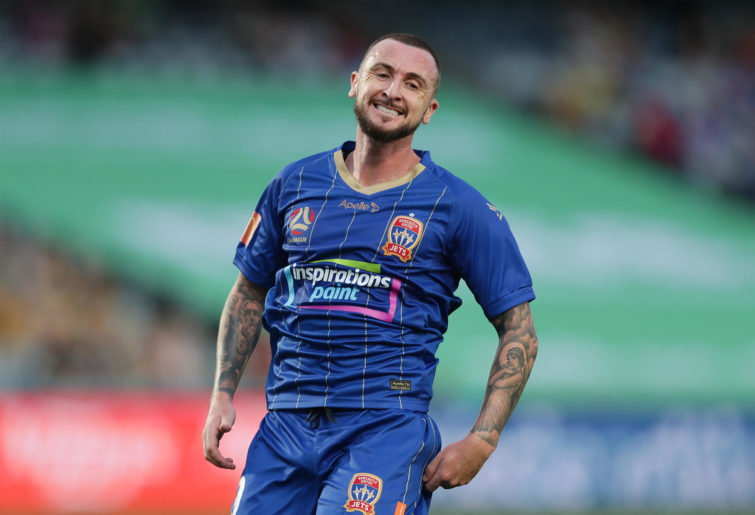 Wanderers fans were up in arms with the decision – and coach Carl Robinson wasn’t much happier.

“It was a dubious penalty call,” Robinson said.

“The inconsistency really, really bothers me.”

“Live to me it looked like a penalty, obviously when you slow things down you can find reasons not to give them… we’ve been on the wrong end of a few close calls in the first four games, which changed our season,” he said.

“Tonight I think it’s swings and roundabouts – you get some, you don’t.”

Despite rain for most of the day in Sydney’s west, the match was free-flowing and an open affair with numerous half-chances in the opening 45 minutes.

Cox was heavily involved and tapped in from an offside position in the 43rd minute.

Newcastle forward Valentino Yuel, who’d clipped an effort off the crossbar in the first half, snapped over the top in the 53rd minute as part of a three-corner run for the visitors.

Cox enjoyed what appeared a clean break in the 69th minute only for Nikolai Topor-Stanley to slide in and block the striker’s shot.

Johnny Koutroumbis had the final chance for the Jets, spraying wide in time added on.