The Australian women’s national wheelchair basketball team, also known as the Gliders, has a rich history of competing in international competition.

Since the Gliders began competing at the Paralympics in 1992, the team has won three silver medals and one bronze medal.

But, after finishing sixth at the 2014 Women’s World Wheelchair Basketball Championship, the Gliders finished second behind China at the 2015 Asia Oceania Qualifying Tournament and failed to qualify for the 2016 Rio Paralympic Games.

Now with the Tokyo Paralympic Games just months away, the Gliders have a new coach in Craig Friday. Friday has been the coach of the Australian men’s national wheelchair basketball team, the Rollers, since 2017, but leading into the next Paralympic Games, he now has responsibility for both teams.

Friday is one of the only coaches in Australian sport to have responsibility for both the senior men’s and senior women’s teams.

“I think I have been pretty fortunate that Basketball Australia have put their trust in me and I’m looking forward to this opportunity.”

Friday takes confidence from what he has been able to achieve with the Rollers in a short space of time. Friday has rebuilt the program and achieved bronze at the IWBF 2018 Championships in Hamburg, Germany. This success is one of the reasons that Friday put himself forward for the Gliders role.

“There are some concepts and philosophies that we have implemented with the Rollers that have worked and I’m confident we can use those with the Gliders too,” said Friday.

“We want to climb our way back to success with the women’s team.”

Those concepts and philosophies were introduced to the Gliders last week at a training camp at Basketball Australia’s Centre of Excellence at the Australian Institute of Sport. The Rollers were also in attendance. For Friday, that camp gave him a lot to be positive about as well as giving the athletes the opportunity to come together for the first time in almost a year. 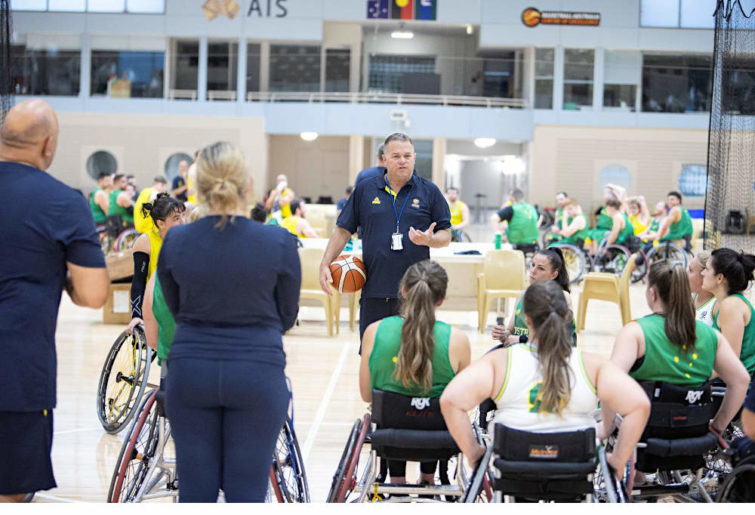 “It is such a long time since we have come together as a collective so getting everyone together has brought a really good energy.”

“I can’t fault the athletes, they have come here in pretty good shape and it was a productive couple of days.”

Prior to this, the last time the Gliders came together was the 2019 IWBF Asia-Oceania Championships in Thailand back in December 2018.

Friday has some key priorities for the Gliders squad. The first is looking backwards before looking forward.

“The Gliders have had great success in this game and that’s probably something this group could tap into more,” said Friday.

“With the Rollers, we are big on culture and one of our feature pieces as part of that is recognising our history; the past and what has been done before and making sure we uphold some traditions that have been put in place.”

“That has always held us in good stead.”

Fortunately, the Gliders have a number of incredible athletes who have been part of the squad in the past including Sarah Stewart who played in the Australian Women’s National Wheelchair Basketball League (WNWBL) and the National Wheelchair Basketball League (NWBL) from 2002 and won silver medals at the 2004 Paralympic Games in Athens, the 2012 Paralympic Games in London and a bronze medal at the 2008 Paralympics in Beijing.

Additionally, Liesl Tesch AM competed with the Gliders at five Paralympic games, won three medals and was the first woman to play the sport professionally.

Friday also wants to focus on the next generation of women’s wheelchair basketball players.

“The men’s program is really healthy numbers-wise at the moment and that is something we have concentrated on over the last three years,” said Friday.

“We have been able to compete at the top level but also thinking about what comes next and where our next Rollers will come from.

“During that time we have managed to expose some younger players to international competition. That has given them a bit of a bug to go away and improve, while at the same time maintaining some pressure on the men in the squad.”

Friday wants this to be the case for the Gliders too.

Some of the younger players are already doing this and Friday suggests that there are a couple of players to watch as the Paralympics comes closer.

“There are a couple of women putting their hands up to be selected like Georgia Inglis from Perth, Jessica Cronje really stepped up during this camp and Hannah Dodd is also in really good form.”

After coming off their franchise’s worst season, surely the band-aid was completely ripped off.