I recently posted an article about the one-club stalwarts from the current 16 teams, and it was quite a line-up.

But it raised the question – what about the one-club stalwarts from the clubs that have either disappeared via merger (St George Dragons, Illawarra Steelers, Western Suburbs Magpies and Balmain Tigers) or just disappeared (North Sydney Bears and Newtown Jets)?

So I had a look, lowered the bar a little to 150 games, and came up with the team below using the following criteria:
• They have retired from the game
• They played 150 or more first grade games for one of the six forgotten NRL clubs
• They did not play first grade for any other club, including the Super League or rugby union

In all, I came up with just 31 players who met this criteria: three from Newtown, five from Norths, 11 from Balmain, two from Wests, one from Illawarra and nine from St George. Of the 31, only 11 had notched up 200 or more games.

To select the side, I picked all of the six available players from Illawarra, Wests and Newtown, three from Norths, and four each from both Balmain and St George.

1. Keith Barnes
Balmain Tigers
He played 194 games over 14 seasons. He is a Hall of Fame member and a Balmain legend and was a prolific goal kicker. He both captained and coached Australia with great success.

2. Peter Dimond
Western Suburbs Magpies
He played 155 games over ten seasons. He was a devastating ball runner and punishing defender lurking out on the wing. He was probably the most fearsome winger to play the game.

3. Brian Moore
Newtown Jets
He played 173 games over 13 seasons. Moore had it all as a centre and formed one of the best club centre pairings in history with Bobby Keyes. He was a powerful runner who dominated most opponents.

4. Graeme Langlands
St George Dragons
He played 227 games over 14 seasons. He is a rugby league immortal, and one of the greatest players to ever take the field, not only for St George, but also for Australia and NSW.

5. John Adam
North Sydney Bears
He played 152 games over eight seasons. He was a quality first grade centre who had an eye for the intercept, and was a player who gave his all on the field.

6. Bobby Whitton
Newtown Jets
He played 174 games over ten seasons. He was a great little halfback who captained Newtown on many occasions. He also played for NSW and was very unlucky not to be selected for Australia.

7. Keith Holman
Western Suburbs Magpies
He played 203 games over 14 seasons. He is a Hall of Fame inductee and was arguably Wests’ greatest ever player. He was a dynamic halfback who played well above his weight.

8. Craig Young
St George Dragons
He played 234 games over 12 seasons. He is a Hall of Fame inductee who combined silky ball skills with an uncompromising approach to the game. He was one of the best front rowers of the modern era.

9. Michael Bolt
Illawarra Steelers
He played 169 games over nine seasons. He was a Steelers legend, captain and seemingly indestructible warhorse. Bolt was a great hooker back when scrums were a war zone, and he led his team by example.

10. Frank Farrell
Newtown Jets
He played 204 games over 14 seasons. He is probably Newtown’s greatest ever player. Farrell was one of the most feared players in his day, and didn’t set out to make friends either on the field, or off it in his policing career.

11. Paul Sironen
Balmain Tigers
He played 246 games over 13 seasons. A Balmain legend, Sironen was an absolute weapon on the field and one of the most destructive ball runners the game has seen. He loved the tough encounters.

12. Norm Provan
St George Dragons
He played 256 games over 15 seasons. He is a rugby league immortal and one of the greatest forwards in the history of the game. He was also a great leader and would be captain of this side. 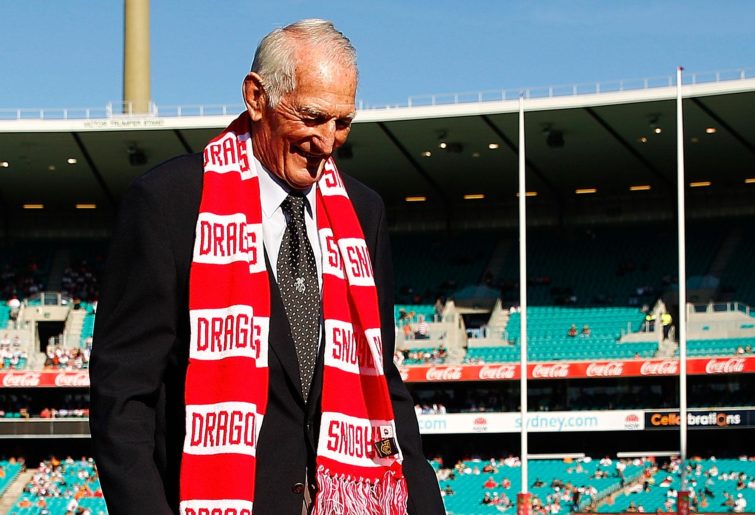 13. Wayne Pearce
Balmain Tigers
He played 192 games over 11 years. He was not the biggest back rower to play the game but certainly one of the best, who was never off the ball in attack and had an exceptionally high work rate in defence.

14. Norm Strong
North Sydney Bears
He played 210 games over 14 seasons. He was a strong, tough and durable hooker who was an integral part of the North Sydney pack throughout the 1950s.

15. Garry Leo
Balmain Tigers
He played 156 games over 11 seasons. Tough, mobile and skillful, Leo made the rare transition from the centres to the front row, and was a great Balmain clubman.

16. Barry Beath
St George Dragons
He played 198 games over 12 seasons. Beath was not only a forward who could play it hard and tough when required, but also one of the fastest forwards of his era, and a noted try scorer. He won his only grand final in his last ever match.

17. Billy Moore
North Sydney Bears
He played 211 games over 11 seasons. He was a tireless and gutsy player with a good turn of pace. Moore was never beaten, and relished taking the challenge up to the opposition

This is not a bad team at all. I wonder how they’d go against the one-club stalwart team from the current 16 clubs?

For the record, the other players who qualified for this team but who don’t appear above were as follows.