Say it in a whisper, but France are finally getting their act together. The perennial underachievers among the top-tier rugby nations have not won a Six Nations championship – let alone a Grand Chelem – for more than ten years.

They have had to stand by and watch on, more than a little enviously, as England (four titles), Ireland (three titles) and Wales (also three) carved up the premier tournament in the northern hemisphere.

Over the past decade, France have been a member of the second division of the competition, posting a 43 per cent win rate. It is a poor return for a country with such a huge talent base at its disposal.

Somehow, their performances at the World Cup – with four appearances at the semi-final or final stages between 1999 and 2011 – have never quite seemed to balance the ledger.

That may well be about to change, with France due to host the 2023 World Cup and building a good young team towards that end.

Part of the background to this resurgence lies in Bernard Laporte’s appointment as President of the FFR (Fédération Française de Rugby). Laporte prioritised the national side over the Top 14 clubs.

He was instrumental in the decision to stop selecting foreign players who had qualified to play for France under the three-year residency rule. The threat of financial penalties and points deductions forced clubs to promote young French-qualified players from within their academies, rather than recruit from the southern hemisphere.

“I wanted the Federation to take back control [from the Ligue Nationale de Rugby], especially on the provision of players,” he said in 2017.

“We must put our international [players] in the best position to win Tests.” 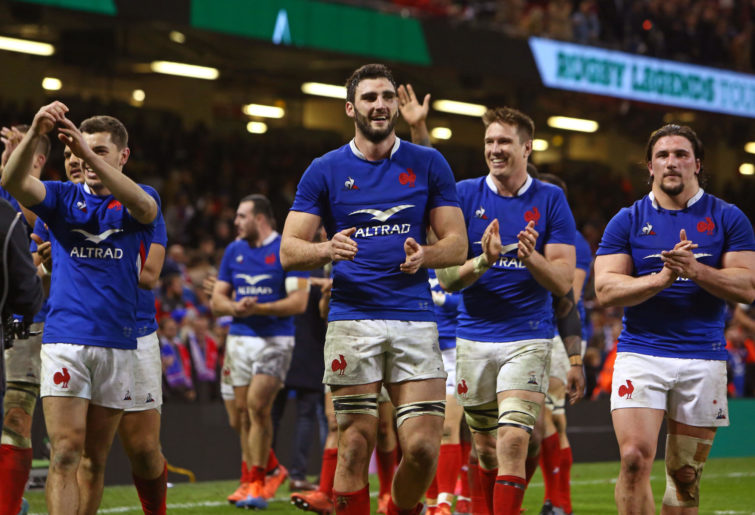 A second part has been the more progressive selection of national coaches with considerable experience abroad. Both Shaun Edwards (Wales and the British and Irish Lions) and Raphael Ibanez (Wasps) were associated with periods of success under Warren Gatland in the UK.

“The endgame is to become again a major nation in world rugby, to win matches and win titles so we can be in the top three in the world,” Fabien Galthie said after bringing the duo into his coaching set-up.

The plans of Galthié and Laporte are beginning to bear fruit. France came within a last-gasp penalty of defeating England in the 2020 Autumn Nations Cup final at Twickenham, with a side lacking all of its regular starters and based on the under-20 World Cup-winning teams of 2018 and 2019.

A majority of those players will feature in the French senior squad when they tour Australia in July 2021. The piquant cherry atop the cake is the probability that they will be locking horns with familiar foes from the 2019 final against the Junior Wallabies.

The summer series may well turn out to be a serious glimpse into the future of the final stages of 2023 World Cup itself.

“It’s always hard to judge with France when they tour the southern hemisphere in their off-season. They’re an enigmatic team at best,” Mehrtens said.

“But with the way they’ve built depth in their squad and a bit more consistency in their game – I don’t think Australia could expect to win the series, albeit being at home.

“I wouldn’t be expecting an Australian victory. If that were to happen, it would be an over-achievement.” 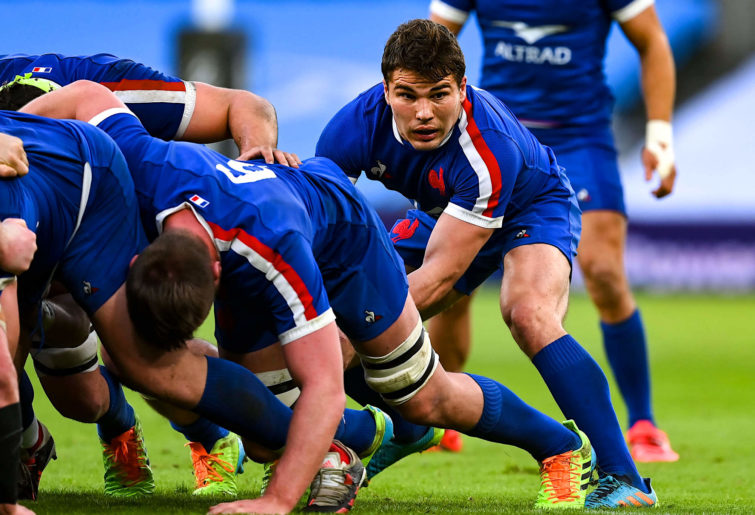 So, what is causing Les Bleus’ renaissance?

It turns out that the centre of improvement is the heartbeat in the middle of the team, in the back row and at scrumhalf.

In the statistical overview from the 2020 Six Nations, either scrumhalf Antoine Dupont or one of the back-rowers, or both, finished in the top two French players in most of the important categories.

Here is a précis of the contributions of Dupont and number 8 Greg Aldritt:

Dupont led the way with the most clean breaks, Aldritt had the most metres made – and so it goes on. If we head over to the successful offloads category, we find Dupont atop the pile with 14 in the backs, and number seven Charles Ollivon leading the forwards with eight.

Everything in France Nouvelle revolves around the involvements of the back row and the man sitting just behind them.

Even the lineout orbits around the back row rather than the locks. It is called by Ollivon, and the men ahead of him (Paul Willemse and Bernard le Roux) are strictly role players. As Geoff Parling pointed out at the end of his recent interview, “A traditional French side might have its primary callers and receivers all in the back row, not the second row.”

That leads to this kind of lineout statistics:

Charles Ollivon led the own-ball wins with 31 out of 54, and blindside Dylan Crétin was top of the poaches with three out of six.

At the lineout, the back row are most definitely the office managers, and the second row are the workers at the coalface:

In this lineout from the 2021 Six Nations game against Italy, Ollivon and Crétin are the two defensive receivers, with the biggest man of the pack (201 centimetres and 140 kilos of Paul Willemse) shuttling between them as a ‘hinge’ lifter.

Crétin gives him the call to form a three-man pod at the tail after making a successful read on Italian movement up the line: 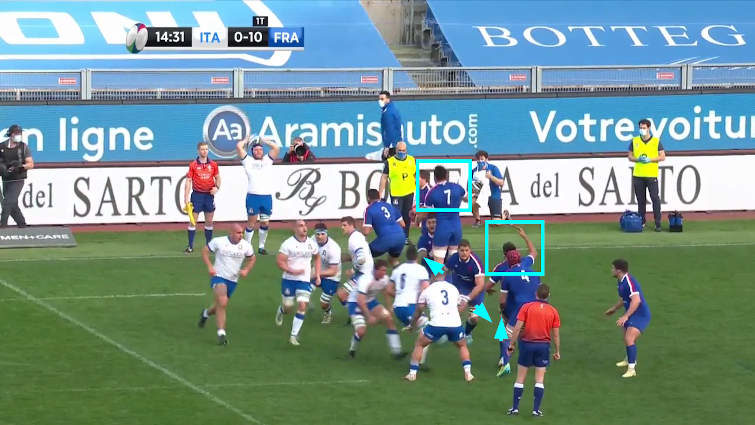 There is no doubt who is in charge, on either side of the throw:

The two potential targets on the French throw are Ollivon (at the front) and Crétin (at the back). Ollivon makes his read and pulls Bernard le Roux (in the red hat) in as his front lifter. From then on, the maul proceeds with Ollivon as the head, organising and directing it, and Willemse and le Roux as the muscles driving it forward.

It is a symbolic statement about the revolutionary structure of this new French side. The second-rowers do the dirty work (Willemse and le Roux were the top two tacklers for France in the 2020 Six Nations) and move the pile in contact, the loosies do the thinking and connecting with Dupont:

Crétin wins at the tail, Dupont links with his backline – but that is only the beginning of his contribution to the play.

His real value is in the outstanding support he provides after the break by right winger Teddy Thomas: 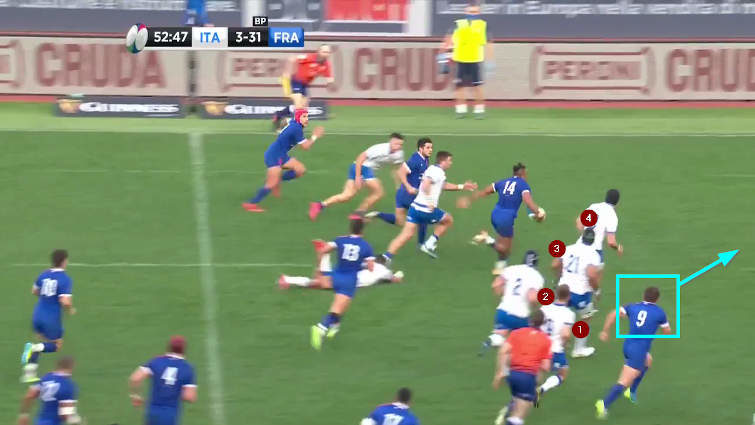 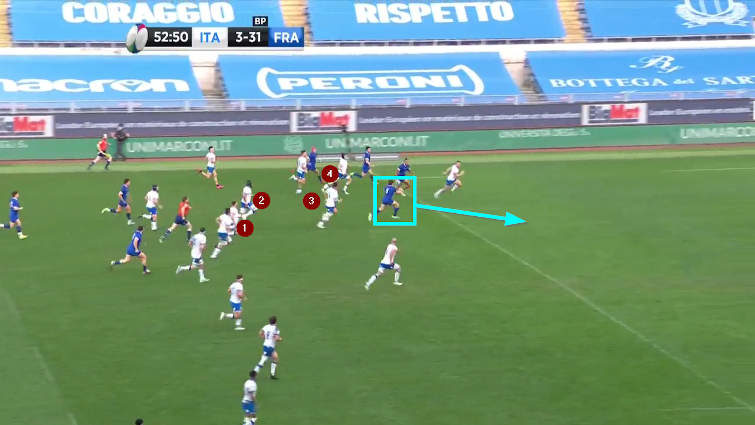 Dupont starts behind four of the Italian defenders, but within only ten metres he has outstripped all of them to receive a scoring pass from Thomas. Not one cannot get anywhere near blocking the passing channel between the two Frenchmen.

Dupont’s early anticipation of his running line, and his scorching acceleration in support sprints, were in evidence again only a few minutes later:

His ability to quicken and clear the support channel of all potential interference is probably unrivalled in world rugby right now.

Dupont’s closing speed also helps explain his wide positioning in defence. The French number nine is often to be found defending out just inside the wing:

It is just as well the ball trickles out of play. Dupont’s speed breaking onto the ball from a wide start spells trouble for the opposition:

After kicking the ball through, he stays up faithfully in support – finishing with a Campese-worthy, no-look offload across his body: 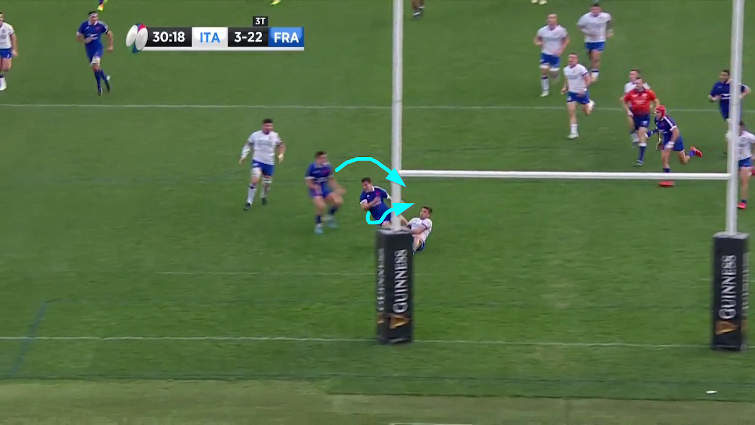 The threat of Dupont running off the base was enough to create France’s first score of the game with a well-weighted attacking grubber for Gael Fickou:

The attention Dupont tends to draw is only really visible from the shot from behind the posts: 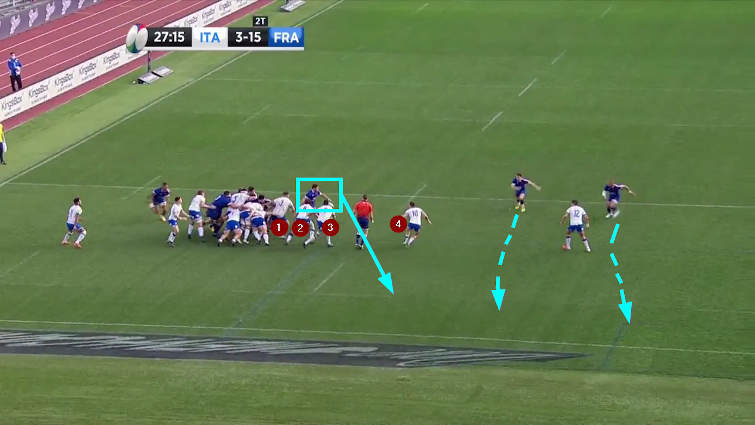 The first four Italy defenders only have eyes for Dupont as he slides out from the lineout maul, and that opens up the channels for the runners outside him.

Summary
The Roar’s own Highlander was on the money when he identified the back row and scrumhalf Antoine Dupont as the beating heart of France’s resurgence in two recent articles.

Both have a far-reaching scope of influence on play. The back row runs the lineout on both sides and provides the bulk of the running metres and offloading in attack. The second row is restricted to the gruntwork in contact: lifting at the lineout, making tackles and cleaning out at rucks.

It is quite an unusual arrangement in the modern game, and it has taken France away from their more traditional macho need to dominate the set-piece. The team is run by the back row and scrumhalf.

It is Antoine Dupont who makes it all tick over. His rare combination of sharp acceleration and accurate reading of play make him a huge handful at the base in attack, in support play and breaking on the ball from wide defensive positions.

Two generations of under 20s will make up the majority of the players on view in the upcoming winter series between the Wallabies and France. That group went all the way to the 2019 World Rugby Under 20 Championship final and played out a thrilling, see-saw encounter which was decided by a single point, 24-23 in France’s favour.

Who is to say they will not meet in another final, this time at a raucous Stade de France on October 21, 2023?