On a lovely evening for football, the Adelaide faithful were desperate for three points after a disappointing recent run. But it was the Mariners who struck first. A Jordan Elsey error allowed Daniel De Silva to slip in behind and find the net after 15 minutes.

It was an appalling mistake from the defender, once again brought on by a keen and consistent Mariners press and an application of pressure that has served them so well this season.

After a period of comfortable control for the visitors, fortune saw Adelaide level after 34 minutes, when Stefan Mauk and Ruon Tongyik’s big toes appeared to come into contact in the box.

It was the most minuscule of touches. Mauk went to ground and it was far more a case of his simulated dive than any contact made by Tongyik that convinced Fielding to award the spot kick.

Sadly, a VAR check confirmed his decision, something that almost every football fan would find difficult to comprehend. It was frankly absurd and Juric calmly slotted his first of three goals on the night.

Fitting with the resilience shown by the Mariners over the last six weeks, they were back in front after 63 minutes when Alou Kuol embarrassed Elsey again and slotted home after a quick thinking Matt Simon had created the space for him.

The wunderkind cannot stop scoring and Alen Stajcic’s use of him from the bench is proving to be one of the most dangerous propositions in the A-League.

However, there were some twists and turns to come. After 67 minutes, Josh Nisbet and Stefan Mauk appeared to be locked together arm in arm as the Adelaide captain entered the box. Once again Mauk came down and the referee pointed to the spot.

It was a more than dubious penalty and Juric accepted the offer with another neatly taken spot kick to level things up at 2-2. 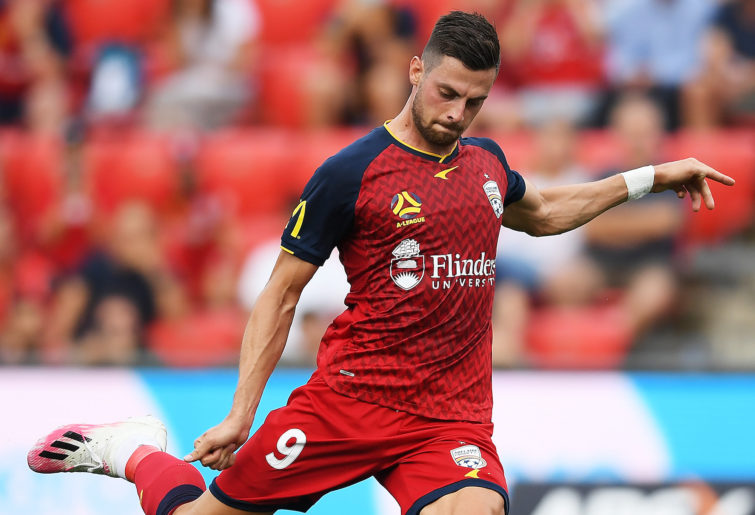 Around ten minutes later, after a chaotic scramble at the Mariners’ defensive end, the visitors broke free down the left.

Kuol was fouled on the edge of the box and the subsequent free kick seemed likely to provide Central Coast with its best chance to re-take the lead.

Then, the evil silence of a pending VAR decision took over, as Fielding was made aware of a potential handball by Kye Rowles 30 seconds prior.

In his frantic defensive efforts, the ball appeared to deflect from Rowles’ boot or lower leg, rise up and simultaneously strike him on the forearm and head.

For those reasons it was not a penalty, yet VAR felt differently and Juric was gifted a third with the 85th minute penalty.

All credit to Alen Stajcic as he visually attempted to calm his frustrated bench, on a night when the Mariners were well and truly deserted by the football gods.

They were clearly the better team, but the opportunity to further extend their lead at the top of the ladder was denied by some poor officiating and a healthy dose of luck for the home side.

No doubt there will be repercussions, and the VAR thinking behind two key moments will be front and centre. The points were immensely valuable for the Reds – undeserved, yet valuable – and moved them temporarily into the top six prior to the remaining matches this week.

All in all, it was a sad night for the league. After such a bright and positive start, the last thing the A-League needed was VAR stepping into the limelight and producing yet another comedy act for all to see.