The results may have been predictable, with last year’s finalists scoring convincing wins over last year’s two bottom sides, but there was something for everybody to take away from a breezy opening to the 2021 rugby season on Friday night.

The Waratahs jumped out of the blocks, and Jake Gordon’s energy had his side in front early. But the Reds response – not 15 minutes later they were ahead by 24-7 – should send a scare through all of the other camps.

The Reds already demonstrated their defensive prowess in 2020. But when this side gets things right they have scoring potential right across the park – the build-up to the second try, to hooker Alex Mafi, featuring superb interplay and offloading at pace.

Things may have gone off the boil after they went a man up – Izaia Perese’s moment of ill-discipline disappointing for such a talented player – but importantly the Reds bench finished things off energetically, blowing the score out to a record 41-7.

Although they will have sterner tests than this, the set piece weaknesses from last season appear to have been addressed. Captain Liam Wright was hardly missed, with new lock Seru Eru effectively running as an extra No. 6.

There was maturity too in the way halves Tate McDermott and James O’Connor didn’t overplay their hand and changed the point of attack to exploit weaknesses in the Waratahs line.

Finding positives from a heavy defeat can often come across as patronising or delusional, yet it wasn’t all bad for the visitors. They rolled their sleeves up and didn’t concede a point in the 20-minute period they were down a man – which, as a side issue, screamed, ‘I’m not exactly sure’, about the new red card law variation.

Flanker Carlo Tizzano was busy, as were both halfbacks, and replacement hooker Dave Porecki justified the interest being shown in him by the Wallabies selectors. But if the Waratahs are to avoid propping up the ladder, they will need to get far more presence and dynamism from their front five and find better cohesion between forwards and backs.

Cohesion was largely the difference in Perth, with the Brumbies showing the benefit that comes with squad continuity, being more organised and settled on both sides of the ball than the Force.

Players took on clearly defined roles. Rob Valetini launched himself out of the line on several occasions to pressure the home side into mistakes, and Caderyn Neville was the standout performer in the match for his continual pestering of the Force’s rolling maul.

They were well served off the bench too, with little men Ryan Lonergan and Issak Fines-Leleiwassa injecting enthusiasm and pace. The only disappointment for coach Dan McKellar was a botched kick-off, opening the door for Tomas Cubelli’s try and a squandered bonus point.

Even so, as captain Alan Alaalatoa pointed out on numerous occasions after the match, “You have to be proud of the boys”.

With Fergus Lee-Warner carrying strongly in the first half, the Force impressed with the ball but lacked the polish to convert. Captain Ian Pryor also failed to read the room, opting for a penalty goal to get his side back to 6-10 when potentially much more was on offer.

There has been a lot of talk in Australian rugby circles around an aversion to ‘taking the three points’, but Test rugby is different to Super Rugby, and each situation demands consideration of its specific circumstances.

Watch out for an article in the coming weeks on the processes of captaincy, leadership and decision-making featuring Wallabies coach Dave Rennie

With the Brumbies having just been placed under a general caution and the mark set 15 metres out in front of the Brumbies’ posts, this was the time to tap and run, to put the Brumbies’ defensive discipline to the test.

One concerning note for the Force was coach Tim Sampson being quick off the mark to besmirch referee Graham Cooper’s effort in caning his side in the penalty count. Forget that the Force actually won the count 13-15. There’s a bigger dividend to be gained from listening to and understanding what referees are looking for this season and addressing his side’s propensity to ignore that.

There was much to like about the approach to refereeing in both matches. For the most part the breakdown area was clean, with jackals not unduly rewarded for attaching a momentary fingernail to the ball.

Another feature was the television match official actively helping the on-field referee with game management, although colours were lowered a fraction by an assistant referee in Perth having to be taught the 50:22 law variation on the run.

It’s also unsatisfactory having a TMO rule using vision that the referee and fans have no access to. Not only does this make it hellishly difficult for the referee to be sole arbiter, but it fails the transparency test.

Most pleasing was a focus on the offside line, a scourge on the game worldwide that has been too readily overlooked in recent times. Partly as a result of this and of a concerted effort by players, coaches and Rugby Australia’s rugby brains trust, there was a discernible increase in pace and flow to the rugby compared to this time last last year.

Other factors contributed. This cohort of professional players is demonstrably fitter than in recent seasons. There’s more to the game of course, but finally bridging the conditioning gap will continue to flow into better outcomes.

Viewers and fans will have their own favourites, but it is already clear that new names – players largely unknown or barely known before this weekend – will be added to the discussion boards in coming weeks.

On the score of emerging talent alone there is a strong sense that Australian rugby is moving in the right direction.

Of course not all was champagne and roses. Too often skills execution failed to match ambition, particularly in Brisbane, where a greasy ball contributed to a high error count. But if that’s the price to be paid for rugby played with positive intent and a less robotic feel than Australian viewers have grown accustomed to, then it’s no price to pay at all.

It’s a small sample and, yes, it’s early days, but if the match officials are determined not to blink and if coaches remain committed to allowing their charges freedom of expression, then the portents are good for Super Rugby AU.

A three-fold increase in TV viewers on the corresponding match last year certainly bodes well, with the value of the free-to-air exposure immediately apparent. Just don’t expect to see that reported on the Fox Sports website, where a bitter article was posted trumpeting the failure of Stan and Tabcorp to finalise a deal to allow for coverage across pubs.

In terms of presentation, it was a mixed scorecard for Stan and Nine as the new broadcaster introduced a ‘cast of thousands’ to cover their first batch of live matches.

If one accepts that David Campese is on board as a ‘name’ to attract more casual or ‘lost’ viewers and a little bit of clunkiness around roles and use of technology is to be expected, then signs are promising.

On the technical front the streaming experience delivered a range of outcomes stretching across the spectrum from hopeless to perfect. 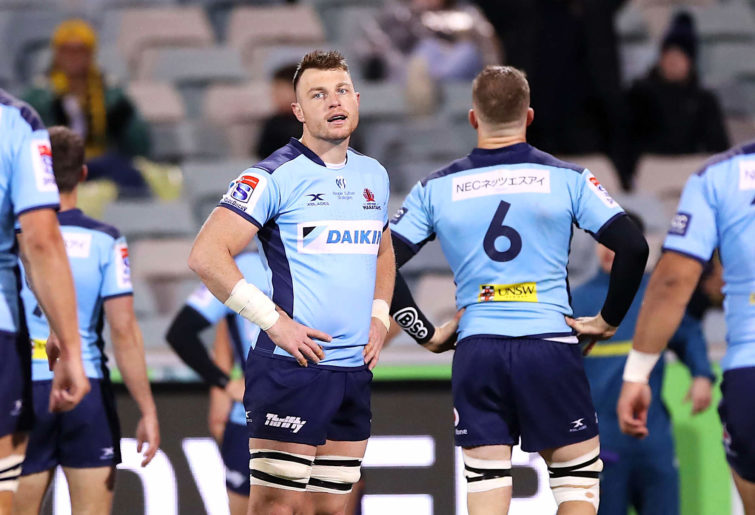 Connecting to a brand-new Android TV, despite having ample download speed, my own stream was a little bit choppy, with voice and picture slightly out of sync. This compared unfavourably to the bedroom TV, where the Nine Gem picture was far sharper and the match was running around 20 seconds ahead.

On replay viewers familiar with Fox Sports reported functionality and usability below what they were accustomed to. At least they had access; my efforts to check a replay on Saturday were met with an error message!

Perhaps the Stan crew had been out celebrating Friday’s announcement that the Japan Top League had been added to the rugby coverage. In terms of cementing Stan as the ‘home of rugby’ this is undoubtedly a good outcome, and discussion boards were filled with positive commentary.

Far be it for this column to be a party pooper, but the ability to flick a switch to check on the exploits of Keiran Read, Beauden Barrett, TJ Perenara, Michael Hooper, Samu Kerevi and others potentially comes at a price.

There is a sense of inevitability about Japanese rugby solving its domestic riddle, whereby the needs of company-owned teams within a traditional structure blend with the need to develop elite playing and coaching talent in a way that maximises the commercial potential for their game.

For the Australian and New Zealand unions this represents yet another pressure point in their efforts to maintain commercially viable professional competitions in the face of global competition for player signatures.

There has been a view that the ‘threat’ from Japan is somehow less than that posed by France or the UK, perhaps because of Japan’s ‘second tier’ status, its location in a similar time zone and its reasonable proximity by plane. This is wrong.

In 2017 Fijian rugby writer Culden Kamea described to me the passion and determination with which his countrymen follow Fijian players in rugby and rugby league competitions around the world. Loyalty is ascribed not to teams but to wanting to see their local heroes perform well.

This is the same reason Australian viewers tune into PGA golf early on weekend mornings – not to watch the Genesis Invitational as an event but to see Jason Day, Adam Scott, Cam Smith and Marc Leishman tough it out with the world’s best.

Japan growing emergence on the world rugby stage is an undoubted positive for the game, but most fans have capacity to absorb only so many rugby games.

Every time a punter decides against attending a Super Rugby match in order to stay at home and watch a favourite player or two in the Japan league the task of rugby administrators in Australia and New Zealand is made even more difficult than it already is.

In this context the delivery of an attractive, compelling Super Rugby competition, competitive Australian franchises and Wallabies success is critically important.

The business model might have mould on it, but for now the ability to attract match day crowds, sponsorship and broadcast revenue and (potentially) private equity funding tied to these performance elements is what underpins the game.