Thanks to all who participated in the forum for my first article this week, either by asking questions or making comment. All offered value. The most intriguing theme, and the most relevant to events at the weekend, was how the success of the Queensland Reds attack under Jim McKay may influence Wallaby selection in midfield and the back three in 2021.

The question fell into three parts:

All of these are great questions that deserve an in-depth answer. Let’s take a look at Hamish Stewart first. He tends to fly under the radar because he doesn’t have the more obvious and spectacular backline skill-set of Jordan Petaia or Filipo Daugunu.

He played flanker at school and idolised George Smith, not the kind of background you’d expect from a top-drawer number ten. So how does he fit into the Reds’ backline?

Armchair Halfback commented of his game against the Waratahs, “That was one of Stewart’s best performances for the Reds. Can you be a schoolboy star and a late bloomer at the same time?”.

Numpty asked, “What role does Hamish Stewart play in the Reds backline?”

The answer is Stewart’s role is highly unusual, not to say unique, in Jim McKay’s offence. He has previously started games at number ten and fullback for the Reds, so you’d expect a second playmaker who could take the pressure off James O’Connor, right?

Wrong. In fact, Stewart didn’t appear once at first receiver in the entire game, but he had nine meaningful cleanouts as either the first or second man at the tackle. He recovered one fumble, forced another and captained the Queensland backline defence. He led two counter-rucks which resulted in a turnover. Great work (for a flanker) if you can get it.

Dean commented that “Hamish Stewart’s strength in defence, cleanout and short bursts of speed are a delight to watch”, and he is not far from identifying the strengths of the Reds midfielder’s game.

Despite all of his experience at flyhalf and fullback, Stewart plays 12 as an enhanced number seven, and the playmaking is left to the man outside him, Hunter Paisami – which is exactly the arrangement the Wallaby coaches have said they want moving forward:

At this attacking scrum, the first two backs the Reds want on the ball are O’Connor and Paisami, with Daugunu and Stewart fading to the outside of the play: 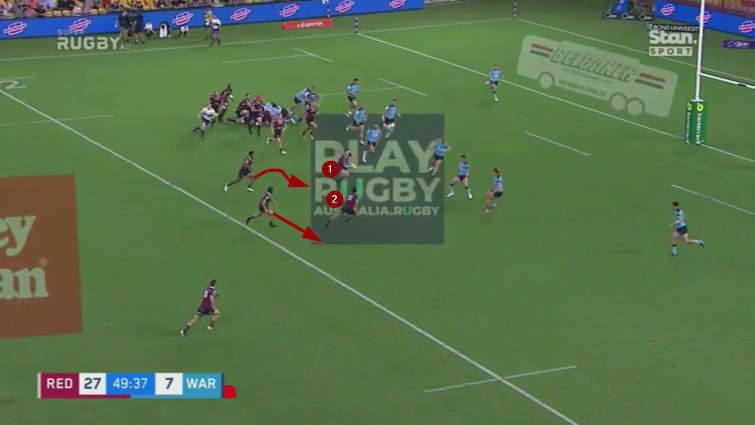 Likewise, when there was a cross-kick to be made and O’Connor was not available to execute it, the responsibility fell to the Reds outside centre:

Stewart’s role is cleaning house at the previous ruck before the creative influence arrives to use the ball on the next phase:

Daugunu runs, Stewart cleans out Harry Johnson-Holmes one-on-one at the tackle, and Paisami makes the half-break from first receiver.

It was Paisami who created the Reds’ third score of the game on the short side:

Stewart is a valuable bits and pieces role-player at inside centre, organising the defence, playing effectively with McReight and Wilson at the front end of an attacking lineout sequence, doing a lot of the dirty work on both sides of the breakdown.

When Red Rob asked the question, “What is the Reds’ best centre pairing: 12. Stewart 13. Paisami; or 12. Paisami 13. Petaia?”, he also answered it in the next breath: “I was in the latter camp until Paisami showed he can do ’12 work’ – some nice distribution and kicking – from the 13 position anyway, and Stewart is a handy glue between the back row and the backline.”

The problem for Stewart is that this kind of work is unlikely to catapult him to the forefront of Dave Rennie and Scott Wisermantel’s thoughts, especially if it means blowing the kind of golden opportunities which do not swing around too often in a Test match:

The issue here is that after stepping inside the first defender to make the break, Stewart runs further away from the three free support players on his outside. Both taking an immediate step back towards that support or putting through a simple diagonal kick to the corner would be better options than seeking contact.

This where the doubts would begin for Rennie and Wisemantel, and handy glue-guy may not be enough for the long-term fix. 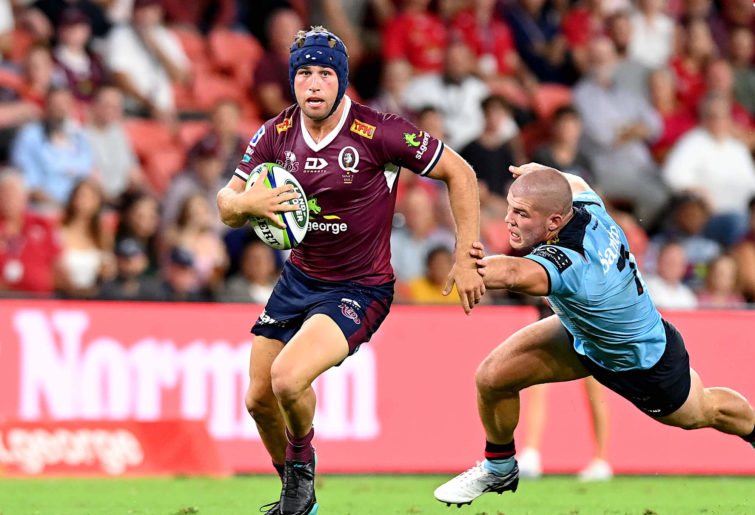 The second question, which is directly connected to the first, is what position suits Jordan Petaia best – outside centre, wing or fullback. Wallabies legend Tim Horan recently came out in support of the idea of moving Petaia to fullback.

Rugby Wizard summarised it as follows: “To’omua/Stewart and Godwin-like players at centre will work well for Wallabies if they can develop a back three capable of outclassing top opposition, for this to happen it might require Suliasi Vunivalu to live up to the hype and Petaia settling in the 15 position.”

The simple maths for the Reds is that four into three won’t go. If they keep Stewart and Paisami in the centres, one of Petaia, Jock Campbell, Filipo Daugunu or Suliasi Vunivalu has to miss out. If Paisami and Petaia play in the centres together, Queensland lose the inherent balance that Hamish Stewart provides.

Want to have your rugby questions answered by Nick in next week’s article? We’ll do a callout for questions next Tuesday, so be sure to come to The Roar then to get them in!

A body of evidence is slowly beginning to accumulate which suggests that Jordan Petaia is at his best playing in space, with the field well in front of him. The original article showed how effective he can be as a blindside winger from lineout, which is now the key attacking position from that set-piece.

Numpty pointed to the try he created against the All Blacks in Bledisloe 3 last year.

“I’m not saying he is a world-class player, but his ball-running and line-breaking ability are. Hell, the mere fact that he can make the Reds’ and Wallabies’ starting team with so many deficiencies highlights just how good his attacking skills are.”

Running at space in an unstructured situation, Petaia is a potent force. He has power, he can move both ways and he can offload in contact. When the defence is still in good shape, it can draw a reckless desire to make the big play out of him, even when the chance of success is low:

In the first instance, Petaia offloads when the support has already run past him. In the second, he kicks the ball away into an area policed by three Argentine defenders. And in the third, he fails to secure possession before making his move on the tackler.

Making a majority of solid choices under a lot of physical pressure is the essence of a number 13’s work nowadays – ask Jonathan Davies or Conrad Smith.

Don said, “I want my fullback to be able to take on the second playmaker role rather than my 12. I think Petaia would play an Isreal Folau-type role at 15 rather than a Beauden Barrett-type.”

If we speculate that Jordan Petaia plays at 15, and further that Hunter Paisami is being groomed as the second playmaker to eventually take over from Matt To’omua, who now gets the vacant spot at number 13? 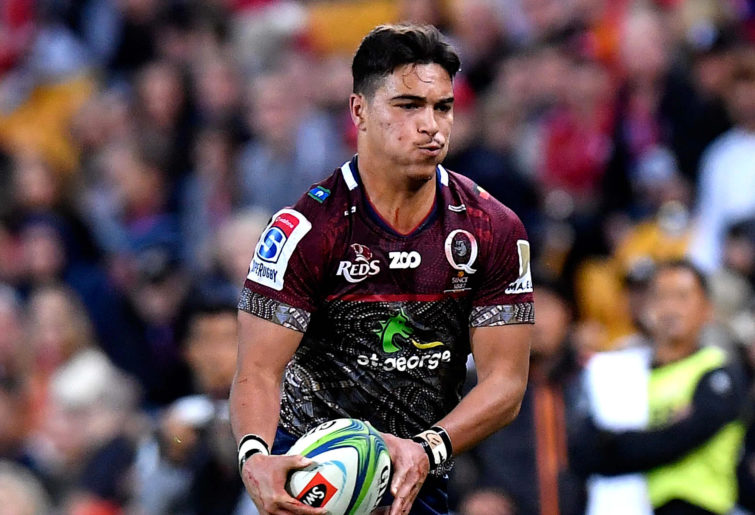 Evidence from the first round of Super Rugby AU indicates that Len Ikitau may get an early look from Dave Rennie. He was a surprise pick in Rennie’s 2020 Wallaby squad with next to no senior professional experience, but the game he played in opposition to the man he replaced at the Brumbies, Tevita Kuridrani, helped explain why.

Fat Gary asked, “Len Ikitau had a strong game for the Brumbies against the Force. Do you see him as a genuine threat to Petaia’s Wallaby #13 jersey?” while Corw also saw him as an option.

Ikitau started by beating Kuridrani on the outside when the Force number 13 showed him space:

At 6:25, Kuridrani looks to have him lined up for the tackle, but within one long, razor-sharp stride, Ikitau achieves separation. What is particularly interesting from a Wallaby viewpoint is that Ikitau appears to be left-sided, carrying the ball naturally in his left arm and able to offload under control from there. That is an enormous help on right-to-left attacking movements, and a skill the Wallabies palpably lacked in 2020.

Ikitau promptly demonstrated that he could step sharply off his left foot when Kuridrani looked to block the outside route in their next one-on-one clash:

Kuridrani has come further across this time, but gets beaten on the inside shoulder instead. Ikitau’s long left arm ensured the movement continues with momentum after the offload to Irae Simone. If he can kick with his left foot as well, the Wallabies may really be onto something.

Ikitau’s final victory over Kuridrani sewed up the result for the Brumbies:

Ikitau does not need to make the clean break – he only has to create enough space to deliver one of those potent left-arm offloads to his inside support. 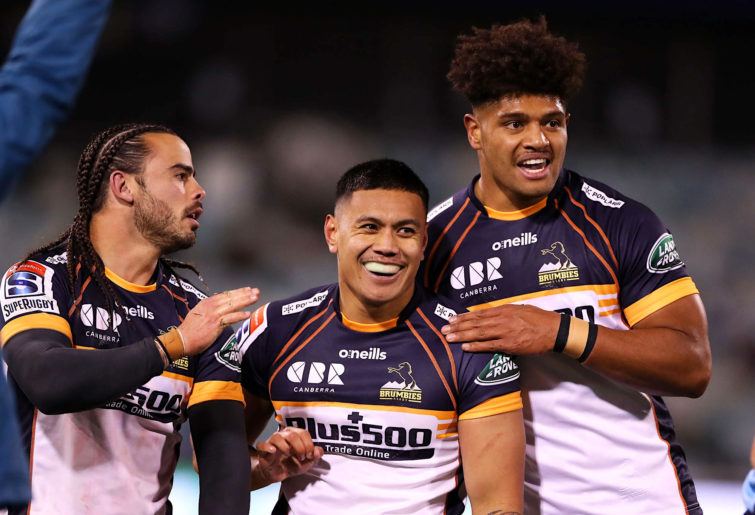 Summary
There is a tide in the affairs of the Quensland backline of flood-like proportions. They have a nice balance in midfield with James O’Connor and Hunter Paisami doing the playmaking, and Hamish Stewart leading the defence and managing the contact work.

That balance may be undermined if Queensland feel they have to develop Paisami in partnership with Jordan Petaia in the centres, and fully exploit the considerable investment in leaguie Suliasi Vunivalu.

If the Reds choose to keep Petaia at 14 or 15, he will not be learning the patience and shrewdness of judgment needed in the number 13 position at international level. Either way, there is a loser.

The Brumbies’ Len Ikitau is the joker in the pack. If he continues to develop his game through the domestic season at the current rate, it may push Petaia into the back three for good.

Others like Matt To’omua and Reece Hodge of the Rebels will have their first say on the matter this weekend, so the situation is only likely to grow richer and more complicated.

Want to have your rugby questions answered by Nick in next week’s article? We’ll do a callout for questions next Tuesday, so be sure to come to The Roar then to get them in!