Glory’s 3-1 win over Brisbane Roar on Friday night lifted their season tally to 18 goals after six games – a new A-League record for that stage of a campaign.

The most goals ever recorded in a regular A-League season is the 64 Sydney FC posted in 2017-18. Glory face a huge battle to surpass that, but the early signs are promising.

Star Socceroos winger Chris Ikonomidis will add further firepower when he returns from a knee reconstruction in the coming weeks.

Glory are yet to keep a clean sheet this season, but their attack-minded approach to games has won over fans across the country.

First-year coach Richard Garcia made it a big priority to play attractive football when he was appointed to the top role last year, and he hasn’t disappointed.

“I want us to be the type of team that I would like to watch,” Garcia said.

“I feel like the guys have really started to take that on board. I feel they want to play that type of football as well.

“At the moment they’re really hitting their straps and doing really well.

“I just think the group is very much together. It doesn’t matter if you’re in the starting XI or not, it’s a great team environment and the guys are really happy with everyone else in the squad. That creates a good buzz.”

Castro’s brace and a brilliant volley from Fornaroli were enough to secure all three points against Roar.

The result was all the more remarkable given it was Glory’s first game since February 5, after which they were forced into two weeks of quarantine.

Glory will be back in action on Tuesday night when they host the ladder-leading Central Coast Mariners.

Brisbane Roar’s winless run has now stretched to four games, with the team scoring just one goal across that period.

“We couldn’t stop scoring a few weeks ago,” Moon said.

“We’re getting the same kind of chances, it just hasn’t fallen our way.”

Striker Scott McDonald, who missed the loss to Perth with a hamstring injury, will also be unavailable for the March 6 clash with Sydney.

The less said about the panel’s Match Week 16 tips the better, with a number of draws bucking the 2021 trend. Frankly, it was a tipping train wreck. Things look no easier this week, with Western Sydney, Adelaide and Macarthur FC all looking to solidify their places in the top six. Western United, Brisbane Roar […]

Brisbane Roar coach Warren Moon says his side can build momentum for a top-six charge after their upset win over Macarthur FC, but they may have to do so without experienced striker Scott McDonald. 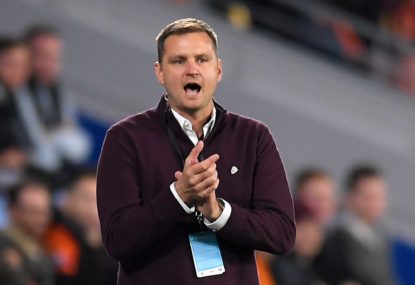 A second-half strike by Japanese midfielder Riku Danzaki has secured Brisbane a point with a 1-1 draw in the Roar’s A-League match against Western Sydney.

After Match Week 6 of the 2020-21 A-League season, Brisbane Roar sat second on the ladder after stringing together four consecutive victories.