Both competitions – AU and Aotearoa – were in full flight and there was lots for fans to get stuck into.

We won’t get to see any trans-Tasman matchups for a while yet but there’s plenty to talk about with the weekly local derbies. The Kiwi teams certainly started well and there weren’t too many signs of early-season errors. Meanwhile, in Australia, there was one incredibly tight game and one absolute blow out as both the Reds and the Brumbies kept marching on unbeaten.

Lots of rugby, lots to get excited about and lots to talk about – is this going to be the Blues’ year? Is Suliasi Vunivalu the most exciting new talent to join Super Rugby ever? Is anyone playing better rugby in the southern hemisphere than Ardie Savea at the moment? And those are just the questions we didn’t have time to cover properly.

So let’s get talking…

Matt Toomua makes the Wallabies flyhalf race more exciting
Last week there was plenty to like about the performances of James O’Connor and Noah Lolesio and debates started straight away about who should be the Wallabies #10. But this week we got to see another contender put his hand up as Matt Toomua entered the competition.

The Rebels might not have played an inspiring style of rugby against JOC’s Reds and they were also on the losing side of that contest, but Toomua put in a very good performance in terms of game management and executing a strategy that came so close to upsetting the home team.

Toomua seemed more comfortable and effective off first phase ball as well as the slow ball from his forwards and was able to direct his team well around the Suncorp pitch. JOC, on the other hand, didn’t seem as comfortable as his team struggled to adapt when their Plan A wasn’t working.

Toomua didn’t have a perfect game by any means. He missed the crucial kick at the end and also fell for Alex Mafi’s dummy just before the hooker scored the try that gave the Reds the winning lead. But Toomua was able to stand out for a good performance even though his team lost. The race between him, JOC and Lolesio will be very exciting to watch this season.

Do the Crusaders have a discipline problem?
The Crusaders were their usual clinical selves against the Highlanders, scoring tries in all sorts of manners and walking away with a solid win. However, they conceded 15 penalties and had two players yellow carded – the first being Ethan Blackadder after just 23 minutes for repeat team infringements. That’s pretty impressive to wind the ref up that much that quickly.

In the past two games the Crusaders have received five yellow cards. Yes, one of those games was a trial match so it doesn’t count towards the competition, but then to lose three players in a trial game seems like a bit of a problem.

Scott Robertson dismissed the suggestion that his team had an issue but you have to think that he isn’t happy with giving the opposition 15 penalties in one game and having 14 men on the pitch for a quarter of the entire game.

Of course, it might not be the Crusaders’ fault. In a great example of “it’s not me, it’s you!” as teams might be feeling that actually, it’s the refs who are getting a bit whistle-happy at the moment. In the Reds vs Rebels game, the ref blew for 32 penalties – 20 of which came in the first half. There were 27 as the Blues took on the Hurricanes on Saturday as well.

Is this part of the referees’ plan to be overly strict in the opening rounds before relaxing a bit once teams have learnt their lesson? Is this bad refereeing or have teams just been getting away with far too much in previous seasons? 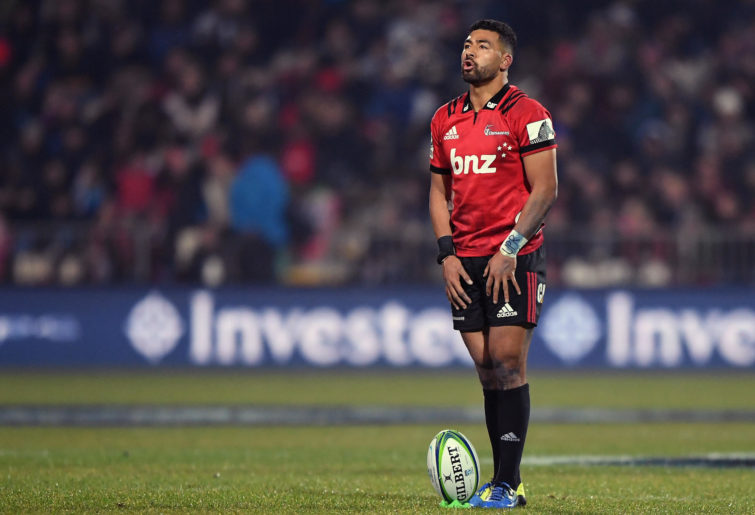 Hitting rucks – damned if you do and damned if you don’t?
In rugby around the world, there has been plenty of talk about how players can and cannot hit the ruck. This weekend, the Reds lost Feao Fotuaika for a dangerous cleanout as he hit Rebels backrower Richard Hardwick in the head according to the ref. As the discussion about head injuries and the long-term risks of concussion haunt rugby at all levels, the red card to Fotuaika does raise two questions.

Firstly – what are players thinking when they do this? They know that is a dangerous technique, that they could very well hurt a fellow player very seriously and they know that the ref is likely to card them for such an action. With the current focus on the breakdown and the incredible number of cameras and angles for refs to refer to, dangerous clearouts at the ruck are not worth the risk. So why do they keep doing it?

Secondly – what do we expect players to do? If the opposition have got a good jacking position and are nice and low, then how are you meant to clear them out if not by hitting them at pace to destabilise them? You can’t get under the player as they are already low and there are likely to be bodies in the way.

Are you meant to sit back and just leave them to it? Should you try the crocodile move and look to twist them off to the side (which comes with its own dangers)? Of course, we don’t want players getting injured and certainly not anywhere near the neck or head area. But we also want the ruck to be a competitive part of the game where both teams know that they can and can’t do.

In the first half especially they dominated possession and territory massively and the Crusaders were giving away penalties like they were going out of fashion. But a combination of inaccuracy and poor decision making meant that the home side didn’t turn that pressure into points and the Crusaders were let off the hook.

The Highlanders played some really nice rugby at points and they will again, but if they can’t turn all those trips to the opposition’s 22 into points then they will be propping up the Aotearoa competition.

Speaking of wooden spoons…
In the Super Rugby AU competition, the games this weekend will have forced many fans and pundits to re-examine their predictions for final rankings. The Tahs losing by so many in Canberra and the Rebels losing by so few in Brisbane, then throw in the fact that the Force are notably better this year than last year and it will be a great competition for mid-table.

Unfortunately for the Tahs you really do feel that the wooden spoon engraver is already getting out the letters N, S and W. Yes they’ve played on the road in both of the opening two games but they have conceded so many points, looked so ineffective in both games and lost key man Jake Gordon.

The term “rebuilding” has already been used to try and soften the criticism on the Tahs and questions are being asked about Rob Penney’s future with the club. Those clouds can only be blown away by wins on game day and you just can’t see those coming any time soon.

And finally a question for you all – should you play on after the final whistle when you can’t win?
As the final siren sounded at GIO Stadium, the Tahs continued to play on. The scoreboard made it clear that there really was nothing to be gained – a win or draw certainly wasn’t on the cards and there was no chance of a useful bonus point. So why keep playing?

Some will say that it’s about professionalism and never giving in and maybe getting that unlikely try that gives the team something positive to hang on to when they do the review on Monday. Really? The Tahs lost by over 50 points – do we really think that the review session would have been different if that gap had been 43 points?

What is more likely to happen is that someone gets injured and the Tahs certainly can’t cope with another injury to one of their playing group.

So why not kick the ball into touch, end the pain, shake hands and head to the bus as quickly as possible?

What do you think – is it worth playing on?