Things are finally in full swing, borders are open, fans in stadiums and matches are coming on thick and fast, in an attempt to catch up on a number of early season postponements.

Even Perth Glory have re-joined the fray, scoring goals at will and with three or four games in hand on all the teams above them, they look like potential ladder leaders when the lopsided playing loads are cleansed later in the season.

Now, with a third of the competition near done, it is more than fair to draw early conclusions and assess some emerging patterns.

Despite some doubters waiting patiently for Alen Stajcic’s Mariners to fumble, stumble and fold like previous incarnations of the men in yellow from Gosford, they continue to win.

The ladder lead is no fluke and Central Coast can potentially feel unlucky that further points were not picked up in at least two of their three losses.

After a hard fought 1-0 win against a ten man Sydney FC on Sunday, Macarthur FC are snipping away at Central Coast’s heels. The new boys look finals bound at this early stage and likely to challenge for the title; with the foreign talent in their squad looking as good as any in the league.

Brisbane Roar? Well, let’s be frank. They looked a million bucks a few weeks back, yet the goal scoring wheels have temporarily come off and one goal in four will not get things done in a high scoring league.

In much the same way, the jury is still out on Western Sydney Wanderers. Despite losing just twice, they have won just three from nine. If Carl Robinson’s stamp is still slowly being imprinted on them, they are potentially going somewhere.

Alternatively, if this is as good as it gets another mid table finish will be on the cards.

Carl Veart’s stamp is already clearly embedded on his squad in Adelaide. Young players given great freedom to express themselves will, at times, produce outstanding results and the Reds look like a team that is going to have some brilliant nights, as well as the odd ‘shocker’ thrown in when they venture into rarefied air.

Like Perth, Western United have had less football than many others. However, after the stunning comeback against Victory on Saturday, it is clear the spirit is there and let’s not forget they have won three from seven. Mark Rudan’s troops look to be finals bound in 2021.

The champions Sydney FC are eighth and have won just three times. They’ve been lucky, unlucky, unconvincing, dominant and disappointing. It is hard to see Steve Corica’s team not climbing the ladder in the long term, although they do look far from competition heavyweights and/or favourites at this early stage.

The Jets are over achieving based on the pre-season predictions of many, yet do have an Adelaide like Achilles heel; with inconsistency and a vast chasm between their best and worst plaguing them thus far.

Sunday’s effort against Wellington was a prime example. After starting brightly, a little misfortune saw the Jets once again failing to believe. They switched off before the break and were unable to crack a time wasting opposition.

Melbourne City are another team light on for match play, yet starting to warm to the task. That task is to redeem last season’s grand final loss to Sydney FC and after doing so around a week back, they now look like a serious toilet seat contender. 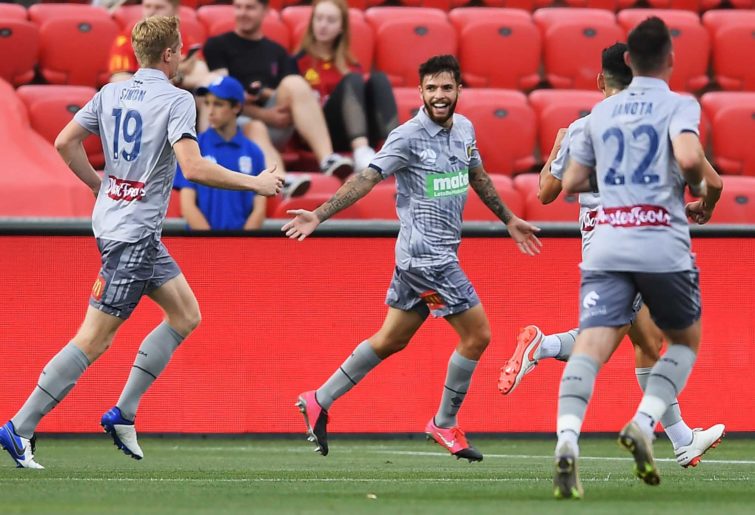 Daniel DeSilva of the Mariners. (Photo by Mark Brake/Getty Images)

Wellington held hopes of being the same after a strong 2019-20 season, yet thundered the ball into posts and crossbars for the first six weeks of play and lost five matches from eight.

Doing it tough in their Wollongong home away from home, some luck finally came their way on Sunday night. The win in Newcastle could well be a springboard for Ufuk Talay’s talented squad, that could well make a run at the top six come June.

In unusual A-League news, Melbourne Victory will be battlers in 2021. Thousands across the country will have cheered that sentence; such has been the long term and sustained success of the club.

However, pre-season concerns around the squad Grant Brebner had with which to work have now combined with a host of injuries to make the light at the end of the Victory tunnel appear very distant.

Western United’s late fourth goal winner with ten men on Saturday said all anyone needed to know about Victory’s fortunes in 2021. Barring an injection of transferred talent, the squad will not be around come final’s time.

Thus, after finally being able to get something of a read on teams after a small body of work, my early crow on the make-up of the top-six reads.

That would make for a finals’ series full of brilliant stories and rivalries and one befitting what has been a wonderful A-League season so far.