Brumbies prop James Slipper is set to miss the next few rounds of Super Rugby AU after a training mishap wrecked his hopes of taking on Melbourne in Canberra on Saturday night.

The unbeaten Brumbies have replaced one Wallaby with another, with Scott Sio making his first appearance of the year in the round three clash.

Slipper, 31, was seen wearing a knee brace on Wednesday and is undergoing scans, according to coach Dan McKellar.

“Unfortunately a bit of friendly fire,” McKellar said on Wednesday.

“We trained really well as a group and I’ve got a bit of a sour taste in my mouth with Slips (Slipper) because he’s been really good.

“Fortunately we’ve got excellent depth in that position and fingers crossed it’s not going to be long term – a couple of weeks and we will see where he’s at but he’s off for scans.”

Sio played 60 minutes with the Brumby Runners last week, while centre Solomone Kata was included on the bench after a similar outing with the seconds.

The Rebels, who could have upset Queensland with a last-ditch Matt Toomua penalty kick after full-time, have kept their line-up mostly intact, with blindside flanker Josh Kemeny and lock Ross Haylett-Petty new faces.

The clash will be the first for halfback Joe Powell against his old club, where he earnt 73 caps before joining the Rebels this year.

Brumbies big man Caderyn Neville is another facing a former side, with early performances by the lock raising chat about Test selection this year.

McKellar felt he was on track for a call-up.

“It’s two games into the season but he’s been excellent,” the coach said.

“He’s been at the Reds and Rebels and it’s pleasing to see him come here and get better and reach his potential.

“I don’t think he’s all the way there yet, he’s someone who can play international level and he’s heading in the right direction there.”

The winless Waratahs have made three personnel changes to their starting side for their first home game of the season, against Western Force, at Bankwest Stadium on Friday night.

Wallaby Angus Bell has been ruled out with an ankle injury with Tetera Faulkner starting at loosehead.

Argentina star Tomas Cubelli will start at halfback ahead of Force skipper Ian Prior, and will partner Jake McIntyre in the halves with Jono Lance dropped.

Former Wallabies forward Scott Fardy has announced his retirement from rugby union. Currently playing with Leinster after joining the Irish club in 2017, the 36-year-old will hang up the boots at the end of the current European season. Fardy was capped 39 times by the Wallabies between 2013 and 2016 and was an integral part […]

It might not have the history of New South Wales and Queensland, and it might not even have the ‘little brother v big brother’ element that fuels the Hume Highway derby between the Brumbies and the Waratahs. 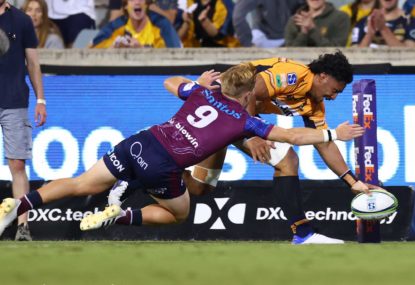