Cam Smith, the most extraordinary ordinary player of them all

When I was a young lad in the oh-so-nineteen eighties and nineties, I was a passionately diehard Balmain Tigers supporter.

This meant, obviously, that I was destined for a deeply disappointing childhood, but there were moments of joy and wonder amidst the heartbreak. The most exciting part of being a Balmain fan in the eighties and nineties was watching the magical exploits of a small but extravagantly talented man, who played in the number 9 jersey (at least, from 1989 onwards – before then he was in 12).

A man who changed the way the position of hooker was played, who could baffle opponents with his quicksilver mind and deft touches, who gave a whole extra dimension to his team with a precision kicking game, and who in addition to his attacking gifts also happened to be as tough a bastard who ever stepped on the field and tackled himself to a standstill in each and every game.

And though he was not – quite contrary, in my view, to best selection practice – always first choice for his state and country, he did them marvellously proud when he was.

And as a young lad I knew that I would never see a rugby league hooker I could rate as highly as Benny Elias.

In 2000 the Balmain Tigers ceased to be. Unable to summon the same passion for the newly formed Wests Tigers, and newly moved to the southern capital, I became a Melbourne Storm fan, a shift in allegiance that meant my adulthood brought much compensation for the heartache and frustration of my youth.

But more than that, over the course of the next couple of decades, I was forced, by sheer weight of evidence, to admit I had been wrong: Benny Elias was not the best hooker I had ever seen.

It’s not just me, of course. Every rugby league fan, who may have had their own special favourites over the years, must, in the year 2021, if they are being honest with themselves, admit that there is but one man who towers above all.

You may have loved the relentless bullocking of Steve Walters, or the darting dash of his brother Kerrod. You may have adored the guts and determination of Danny Buderus or the fiery, Elias-esque craft of Robbie Farah.

If you are of an older vintage maybe you could even now wax lyrical about the brutal dominance of Noel Kelly, the scrum mastery of Elwyn Walters or the fearless leadership of Max Krilich. If you’re living purely in the now, maybe the blistering speed of Damien Cook or the cool control of Josh Hodgson. 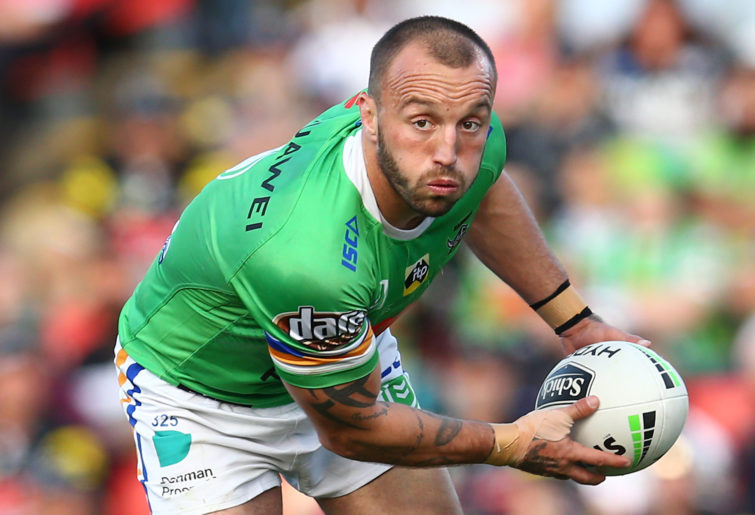 Josh Hodgson is primed for a huge season. (Photo by Jason McCawley/Getty Images)

And if we’re being honest, it doesn’t even matter whether they played hooker or not. In any position, in any era, in any context, the best you can say about any player who isn’t Cameron Smith is that, just maybe, if they were all they’re cracked up to be, they might have been as good as Cameron Smith.

Cam Smith played 430 NRL games. The next best is Cooper Cronk, on 372. That’s more than two whole seasons that Smith has on his nearest rival, who himself was a freak of endurance.

The three other players to reach 350 games are backs – the next forward on the list is Steve Menzies on 349. On top of the 430, Smith played 42 State of Origin games and 56 for Australia.

That’s 528 top-level games, in nineteen seasons. The average professional rugby league player might rack up that many games if he were allowed three or four careers. The average human being will tend to feel faint just reading the numbers.

For most of those 528 games, Smith would have played the full 80 minutes: it would be exceedingly rare for him to have clocked less than 70. And throughout each one, he was following the ball wherever it went, swooping into dummy half more often than not, taking the first receiver role frequently when he didn’t, and throwing himself into tackle after tackle in defence, either topping the tackle count or coming damn near it.

And this is not to even countenance the hideous number of hours he has spent on the training paddock, in the gym, in recovery sessions, pounding the pavement in pre-season runs.

Oh, and also he kicked goals.

The sheer longevity of the man would have him in the loftier reaches of most “all-time greatest” lists, even if in terms of ability he were merely an honest workhorse, a journeyman of whom his coaches could say, “he always does a job for us”.

But as it happens, Cam Smith did not just play 528 games: most of the time, he conducted them like an orchestra.

Cam Smith was never an obvious superstar: that’s why it took so many years for everyone to notice just what an extraordinary creature they were watching. He was not particularly fast, or possessed of especially devilish footwork.

He was a long and accurate kick, but not the best in the competition. He threw passes with skill and judgment, but was neither a purveyor of lengthy bullets or outrageous offloads.

He tackled tenaciously but never pulled off the big hits. Even the preternatural level of fitness that allowed him such a long career was not immediately evident when looking at him: there were no bulging muscles to flex.

He was as down-to-earth and everyday as his own surname: an ordinary man who played in an ordinary way… that just happened to bring a couple of generations of great players and teams to their knees time and time again.

Even when watching a game when it was clear that Smith was dominating proceedings, when his total control of the game and the inability of the opposition to stop him was blindingly obvious, it was at times a little difficult to describe exactly how he was doing it.

It was something about the timing of the passes, the way the ball kept hitting the chests of teammates charging into the defensive line’s weakest point. It was something about the way he would defer to his halves to take care of the kicking, until the very moment when the opposition’s back three looked slightly out of position, when he would suddenly rip off a low, raking punt that rolled gently over the ten-metre line.

It was something about the way he would leave markers standing still, looking sheepish and unable to lay a hand on him – not via dazzling speed or dancing feet but simply by picking his moment.

It was something about the fact that every single time he took the field, every member of the other team knew that he was going to do all of this, but still couldn’t stop him.

With such understated brilliance, it’s no wonder that his greatness crept up on us. He just kept on running out, scooping the ball up, firing the ball to supports, scooting out from dummy half, thumping it downfield and bringing down much bigger men by the score.

There have been criticisms of course, many of them. In the comments below they will no doubt be enumerated. They are of little importance at this time. Even those who claim he doesn’t deserve the stature he has attained were, lucky to have seen him play.

For like Bradman, Phar Lap, Jordan, and obviously Benny Elias, Cam Smith was the wonder of an age. In a sporting world that worships the ideals of Higher, Faster, Stronger, Smith was none of these: he was simply Better.