Given the distinct histories of rugby league and rugby union, with league having broken away from rugby in England during 1895 (Australia and New Zealand in 1907), the sport of sevens could again provide a link between the two codes.

While we know there are many reasons why it is unlikely to happen, given obligations to clubs and each major rugby code, just imagine how good sevens competitions would be if we allowed the top players from the 13-man game to compete sometimes on the rugby sevens circuit and/or the Olympic Games.

Yes, we note that this would be problematic for Australia’s major codes given that the Olympic Games occurs during the season, but allowing representation in the sevens from both rugby codes would provide a further opportunity for players to represent their country on another stage in a sport where excellence from both codes would be on display.

At present, many rugby sevens players have a link with the 15-a-side rugby union game as backs and loose forwards. A few top rugby union players have endeavoured to play in sevens, most notably Sonny Bill Williams who ruptured his Achilles tendon early in the first match for New Zealand at the 2016 Olympic Games.

While rugby league currently seeks to promote the game of nines, this format is light years away from ever competing with sevens on a global scale, as the latter sport is already a significant global game with an annual international Sevens competition and Olympic Games participation.

International rugby sevens already has quality teams from around the world, including Europe with the traditional rugby union powerhouse nations, Africa (including Kenya), North America (USA and Canada), South America (Argentina) and Oceania (including island nations such as Fiji and Samoa).

While Asia is behind the pace, perhaps with the exception of Japan, Olympic Games participation may lead to added interest there in time.

At the domestic level, just imagine Australia’s best rugby league and union teams going at each other in the preseason playing a sevens tournament as part of their build up to the season.

With top players from both codes having the sevens option, watching such matches would be an exciting way to compare the quality of players from each code competing against each other, a possibility that would be of interest to many rugby fans.

The sevens game is a relatively easy bridge between the two codes as it is nowhere near as technical as the 15-man rugby union game, yet just as fast and demanding as rugby league nines.

Due to the style and speed of sevens, all players have to be quick, agile, and lean, with no major difference between positions.

The physiological demands of sevens will test top players from both codes due to the high intensity and speed of the game, as well as fitness requirements from playing a tournament format over two days.

So what rugby league players would be suited to rugby sevens?

We cite five current rugby league players which we believe would be suited to rugby sevens.

First, we mention Tyson Frizell (183cm and 108kg), who has already played for Australia and Wales at league but could also play for Tonga due to his mother’s birthplace.

Frizell, previously a rugby union prodigy who already has an understanding of the technique necessary to win rucks, has the speed, strength and agility to be particularly suited at sevens, being a back rower in league who very often causes havoc for defensive lines.

Second, Angus Crichton (Australia), who played for Australia’s school boys’ rugby union team as a centre, is a league back row player who (like Frizell) has an ability to run and change lines against a defence, and use his speed to turn half a line break into a try scoring opportunity.

With rugby sevens predominantly a game of one on one tackles, Crichton’s can use his speed, size (187cm and 102kg) and agility to break a defence through offloads that enhance a side’s second phase play by creating plenty of opportunities for faster players. 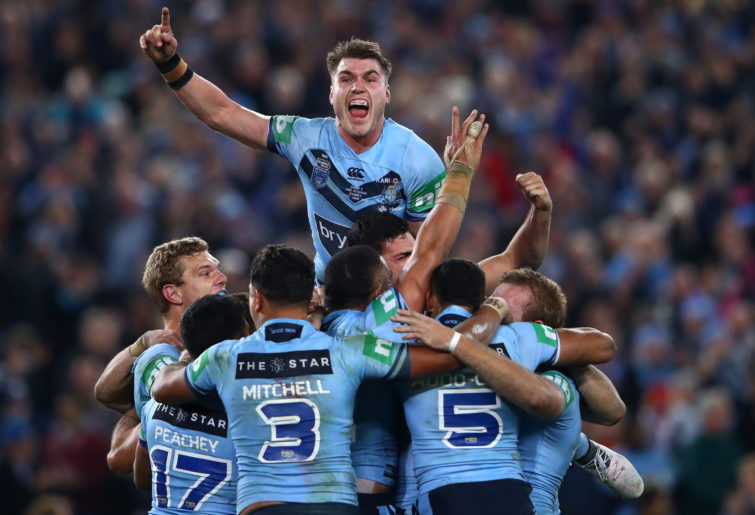 Angus Crichton of the Blues and teammates celebrate. (Photo by Cameron Spencer/Getty Images)

Third, there is Brandon Smith (New Zealand) who, despite no rugby union background and relatively small stature (180cm and 94kg), has the attributes and qualities that would make him a lethal rugby sevens player.

As Smith already plays a number of forward positions, his versatility, courage, skills and speed would make him an outstanding addition to New Zealand’s rugby sevens team.

Fourth, there is Australia’s Jack Wighton (190cm and 96kg), who won the 2020 Dally M Medal (Player of the Year) during the coronavirus disrupted season.

Renowned for his ability to pull off a big hit, strong running, solid defence and vastly improved short and long kicking, which makes him one of the most complete backline players in rugby league, all Wighton would needs is a few sessions learning how to ruck and clean out in order to become a formidable player for Australia in rugby sevens.

Finally, we mention Morgan Knowles (180cm and 94kg), an established player in the English Super League who plays for St Helens and Wales as a back rower and more recently as a hooker.

Like Brandon Smith, Knowles has the energy, speed and ball playing to be highly successful in rugby sevens.

While our desire for sevens to include top rugby league (and union players) in big competitions may be a pipe dream, we believe that the possibility would be a positive development.

It would provide some link between the codes, significant public interest, further opportunities for players to represent their country, enable national sevens teams to gain a bigger pool of talent to choose from, and display both league and union talent on a world stage (the Olympic Games).

This story was written by Chris Lewis and Jacob Anderson.