The world lost one of the great sporting commentators on March 13, 2021, and arguably the greatest of any sport of all-time – Murray Walker, F1 commentary genius.

While it shouldn’t have comes as too much of a surprise given his age and health problems, it is still incredibly sad to think the iconic voice is now officially consigned only to replays and YouTube.

The passing of very few sporting commentators would attract such widespread attention, but Murray Walker was in a different league.

Many will highlight the mistakes, the Murrayisms if you will, and while they were always amusing, there was way more to him than the occasional “prophecy which would be immediately proven wrong”, as Murray himself would put them.

Another aspect of Walker’s commentary was the pants-on-fire delivery, and there was no forced, over-the-top enthusiasm to his commentary – it was as genuine as anything could be in life. Murray Walker loved the sport, and the sport loved him back.

But if you base everything about Murray Walker on screaming delivery and stuff ups, you don’t get the whole picture. In fact, you miss the best of him and why he was the greatest.

His enthusiastic delivery was genuine, and his Murrayisms came from that passion, not because he hadn’t done his homework.

Walker’s best ability – and the reason he’s the best sports commentator of all time – was having the right tone, the right delivery for the right time. If something sad or tragic had happened, he understood the feelings of the F1 world and relayed the information.

When he was commentating on the big, important races, the title deciders, he got the tension and mood right always, and his delivery of F1’s biggest moments are almost as iconic as the events themselves.

Think of the 1989 Japanese Grand Prix, on lap 46 when the inevitable happened after a pre-race warning from Prost, the reaction of Walker ended up as iconic as the flash of the red-and-white, world-beating McLaren tangling at the Suzuka chicane.

It was included in the Oscar-nominated Senna documentary, no less. It had all the excitement of the incident, but with a Murray twist of calling the incident “fantastic”. Probably not the word many commentators would have used, possibly even Murray himself if he were to script it, but fantastic it was all the same.

Fantastic is what Murray was.

There was also the infamous 1986 Australian Grand Prix tyre blowout of Nigel Mansell.

Walker’s description and reaction summed it all up perfectly. Here was Mansell, who should have already won the title in 1986, but who had also had the title comfortably in his grasp. Lying third and a mile ahead of fourth, which was plenty to seal the title, he blew a tyre – which should never have happened.

In the split-second burst of a tyre and the subsequent shower of sparks, Mansell’s title hopes were over, and the delivery of the hard-to-believe moment was perfect, as always. As above though, the inclusion of the word ‘colossal’, among all the shock, was pure F1 genius.

But for all the big, big moments in F1 that Murray Walker delivered perfectly, his true gift was being able to keep any race at any circuit interesting, or at least continuing with until the end.

Yes, he was helped by an era of F1 where the cars broke down a lot more, and there was a much wider range of quality of driver, but the great man would have been able to make paint drying overnight be an event worth keeping an eye or ear on.

Of course, this is coming from someone who regularly had old Grands Prix on an old iPod, and who often went to sleep with the voice of Formula One the soundtrack to the last minutes of that long day. To dob myself in, the 1996 Monaco Grand Prix was a favourite for covering all of Murray’s best.

But how many Spanish Grands Prixs did Murray have to attempt to get F1 fans around the world through? Those Monaco Grands Prix, where there were fewer overtakes in a race than Australia has had Prime Ministers in the last decade.

Another case in point was the 1989 Belgian Grand Prix where his legendary co-commentator called in sick on race morning, and he had to fly solo in the commentary box, joined occasionally by any British driver who had retired from the very wet race. Thankfully, there were a few of those retirements.

That was his gift more than anything else. Turning any race, any circumstance, into a genuinely watchable affair.

Another great aspect of the great man was the fact that he rarely had anything bad to say about any driver or team. Even the most hopeless, busted-arse teams, or underwhelming pay drivers were afforded encouragement, or at least a sliver of hope.

It did help that many years were spent alongside the acerbic, cynical James Hunt who seemed to have regular beef with such underperformers, and Hunt set a lower bar for the support of F1 drivers.

To say that his look-on-the-bright-side, error-prone, over-the-top F1 commentary would’ve led to a maelstrom of social media jerks who either know way better from their zero years experience of F1 commentary or sporting perfectionists with years of phone keyboard tapping experience under their belt would be an understatement. 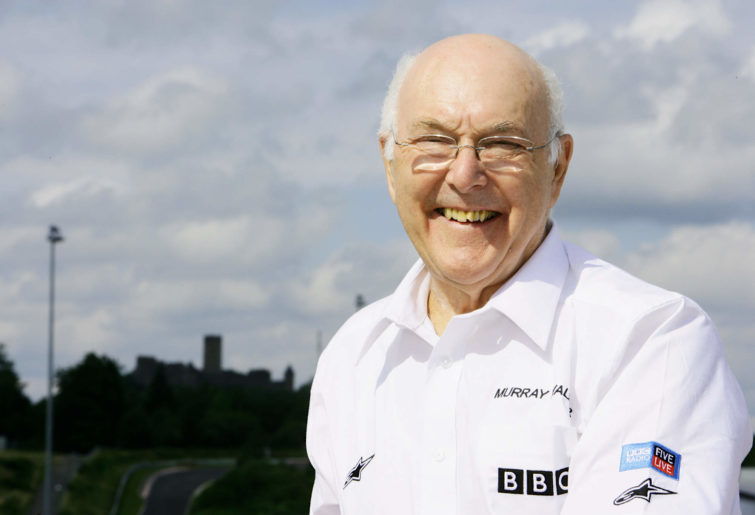 Thank the good lord that Murray Walker retired in 2001, well before the world was poisoned by way too many people who think they know better.

Even when the ‘errors’ were pointed out to him in interviews or podcasts, he always took it on the chin, and owned the mistakes as part of his act. And people loved him for it. Even on the Late Show with David Letterman.

These days more than ever, controversy sells, disputes get clicks, but Murray Walker’s commentary was always genuine, leaving the controversy to happen on track or in the pitlane, not in the commentary box or online.

He was helped by a golden era of great drivers and cars that one was never quite sure would make the finish.

Murray Walker is a one-off, one of the sporting giants who will never be replicated, as you just can’t force anyone to be the overall genuine package and to be as loved and remembered. One of the true statements that things were better back in the day.

So salute Murray Walker, and excuse me while I go and binge as much Murray Walker YouTube gold as I can find.

Some bits and pieces from Murray Walker’s career

I have given my thoughts and a few clips of Murray Walker’s best work above, but there’s so much more to share, so here are a few more of our favourite clips available on YouTube.

1982 Monaco Grand Prix
A long one to start, but possibly the best three laps of F1 need the best F1 voice to portray that.

A special treat at 1:58 into the video, where Walker tells the audience that the flag marshall is declaring the Ferrari driver Didier Pironi “Numero uno”, where he was actually trying to point out it was raining.

1995 Australian Grand Prix
Leader David Coulthard has a never-before-seen surprise for Murray Walker. A decent feat, given his decades of F1 experience.

1997 Australian Grand Prix
Go to 1:37 and see Murray Walker’s reaction to Jean Alesi running out of fuel. In the refuelling era.

1992 Australian Grand Prix
Nothing spectacular, just Murray at his best, making anything interesting.

Walker commentating on snooker
Who knew this clip existed and that Jeremy Clarkson ever looked that young?