I would like to formally apologise to Carlton and the Bulldogs.

They may have lost this weekend, and they probably are still going to miss the top six for finals, but they showed this weekend that they did not deserve to be grouped into the moniker of the tepid trio.

Carlton had every chance to upset Fremantle at home on Sunday afternoon were it not for the brilliance of of the Dockers late in the fourth quarter.

The day before, the Bulldogs showed that even against a team as good as the Kangaroos, they were competitive up until the late moments as well, and are 2-2 against the new list of contenders, which must now contain both the Bulldogs and Blues, who have earned their place at the grown-ups table. 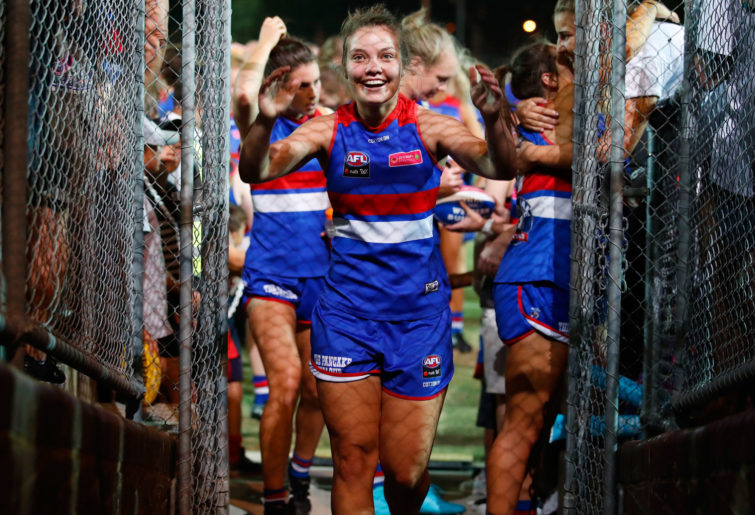 Unfortunately, there’s a notable absence in this discussion of the re-labelling of the tepid trio. St Kilda’s upset of the Bulldogs in Round 1 is looking more and more fluky as the year goes on, because the only other team they’ve managed to defeat has been win-less Geelong, with a score that was less impressive than even West Coast’s demolition of them on Monday.

On Saturday, they added another tepid loss to their four others, this time to one of the original bottom five, albeit the best of them in Greater Western Sydney. It seems clear we now have to expand to the bottom six.

The redistribution of opponents for the final three rounds has already had a tremendous effect on the level of entertainment on the ovals in Round 7 alone. There was no margin over 20 until Geelong played on Monday, and we can hardly blame the Eagles for not exercising more restraint in their rout, given that it was only their third win ever. But it made for the only non-competitive game of perhaps the best weekend of footy so far this year.

Now we get another bountiful buffet of games awaiting us in Round 8, along with an additional nine men’s games that I’ll discuss in a separate article later in the week. I gave some preliminary forecasts on these games before Round 7’s games, which I’ll take the liberty of adjusting slightly following the surprises and expected outcomes of last weekend.

Carlton (3-4) at Gold Coast (0-7) – Friday at Metricon, GWS Giants (3-4) at Geelong (0-7) – Saturday at GMHBA Stadium
Carlton and GWS each have winless opponents in their sites for Round 8, and presumably at the end of the round both will be an even .500 for the season at 4-4. These two represent the border between the haves and the have-nots. Their match-up in Round 9 will determine which of the Blues or Giants ends the season 5-4, winning record in hand, and which one falls below the poverty line at 4-5, part of the have-nots for season 2021.

Meanwhile, Geelong and Gold Coast also match-up in Round 9, and their game will determine who not just possesses the wooden spoon but most likely becomes the first team in AFLW history to go 0-9 for a season. For this weekend’s games, though, it seems apparent that the visitors will win each game by several goals apiece – our ratings say three, but they’re just being nice.

St Kilda (2-5) at Collingwood (6-1) – Saturday at Victoria Park
While the two other teams with four and 20 premiership points baked in their pies have difficult match-ups against other contenders. The real Pies get a chance to bring their percentage up to 200, with the additional hope that Fremantle and Brisbane’s challengers can drag those iridescent percentages down to that same number. That will be an all-important factor if Collingwood still intends to win a top-two slot.

North Melbourne (5-2) at Brisbane (6-1) – Saturday in a Gabba double header, Melbourne (5-2) at Fremantle (6-1) – Sunday at Fremantle Oval
Meanwhile, the Lions and Dockers have their work cut out for them. We’re favouring the six-win teams (but only by single digits) against difficult contender opponents who at the very least should bring those gaudy 200-plus percentages down a sliver. Whoever can keep that magic number above the others (and Fremantle will know where Brisbane and Collingwood sit when they head onto the oval on Sunday afternoon) will have that top-two slot in their sights.

But neither team can take the win itself for granted – that must be priority number one, or it’ll be a loss for certain. Whether either team will benefit from the men’s season opening – Brisbane are going to be paired with their men’s opener versus Sydney, while Freo has to deal with the competing men’s opener for West Coast that same afternoon across town in Optus – is hazardous guesswork, which I refuse to undertake.

West Coast (2-5) at Richmond (2-5) – Sunday at Swinburne
These are two very evenly matched teams, if not particularly challenging for the top clubs. This should be a tremendously close game, which if we base it on the margins from their two wins (both teams defeated Gold Coast and Geelong over the past three weeks) should lean Richmond’s way, as they have the more impressive scorelines in both cases. The ELO-FF ratings give the Tigers a two-goal edge, which seems about right.

Western Bulldogs (4-3) at Adelaide (5-2) – Sunday at Norwood Oval
This will be the last contender team the Doggies will play in 2021, and an upset here might put them in position to steal a finals berth if one of the five-win teams slip up this week or next. Because of percentage, they’ll have to win out and hope one of Adelaide, North or Melbourne loses both of their games, which is very possible as all are playing contenders this week and next (I am counting the Doggies as contenders as of today).

But a single win either week by any of the three essentially clinches a finals berth for that team, because of the Bulldogs’ paltry 101 percentage. Right now, they really regret that Round 1 loss to the Saints.

We missed out on picking the Giants and Demons wins last week, and leaned into Collingwood when their game had to hastily be moved out of Queensland, flipping the competitive advantage towards the Magpies. That situation makes Brisbane’s win look even more impressive, all things considered, but it’s hardly unlike Brisbane’s women to bring the heat when the pressure mounts. So all in all we were only four of seven last week, and 38 of 49 for the season.