Strap on your snorkels for Slipper Saturday

Get out your snorkels if you’re heading to the races in Sydney this Saturday, as the only guarantee I can give you is that it will be wet.

It should be no surprise of course. Whenever Sydney holds a major race meeting, the heavens decide to open.

Five Group 1 races are on the card at Rosehill Gardens tomorrow and I have decided to preview them all on what is sure to be a bog track, bypassing a dry Mornington, which says a lot about the graveyard that is Mornington.

Good luck if you’re having a punt and remember to gamble responsibly.

The track is rated Heavy 8 at time of writing (preview is for a Heavy 9/10). Rail out three metres.

The UK runner Addeybb holds a small margin over the latter in betting and most would remember that they duelled in Sydney this time last year, with Addeybb getting the nod over Verry Elleegant in both races.

One was in the Queen Elizabeth on a heavy track, so it’s hard to think that Chris Waller’s mare is going to be able to turn the tables.

I loved Lion’s Roar’s run in the Randwick Guineas and if the fence is off, he can come from behind again and sweep around the field to win.

Those looking for some value might lean towards Sky Lab, who is double figures and has won on a heavy track before. 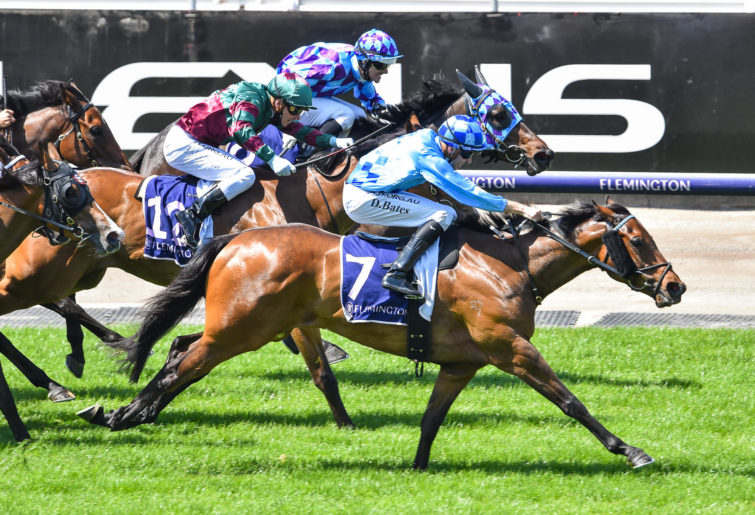 Race 6 at 3:45pm: $1 million Group 1 George Ryder Stakes (1500m)
11 runners make up this field and nine of them are probably winning chances. That’s why I’m looking for value.

Junipal is probably unproven at this class of race but he has been set for the assignment and was more than handy last spring. Ciaron Maher and David Eustace appear to have set him for races like the George Ryder this autumn and even though he is first-up, I think this wet tracker will love the conditions in Sydney.

You’ll get close to $20 or maybe even better on race day so let’s hope we see a big run from the five-year-old.

Race 7 at 4:30pm: $3.5 million Group 1 Golden Slipper (1200m)
The feature race of the day appears to be a genuine raffle as a result of the track conditions.

I tossed and turned over this selection but ended up deciding on the runner with the unbeaten form. The filly Four Moves Ahead has two wins from two starts and has won on a heavy track before. From barrier 10, Nash Rawiller will have options from the jump and I suspect he’ll take a positive position just off the speed. Being caught a little wide won’t be an issue.

While winning her margin in the Group 2 at Randwick wasn’t huge, the time didn’t lie, which means she’s got a bit of class on her side.

This race has produced a few upsets over the years but an unbeaten filly with wet track form ticks enough boxes for me and Four Moves Ahead is still an each-way price.

That’s why I’m going with bottom weight Tailleur, who carries just 51kg with Rachel King in the saddle and has a barrier that will give her options. This Godolphin mare has won six races from eight starts with two minor placings. She’s also won three times from four attempts on a heavy track.

There’s no doubt this is a huge step up in class from what she has been tackling of late, but the Galaxy is a handicap for a reason and this featherweight chance is a big hope.

Punters think so, too. She has been backed from $8 into $5, which is a good sign for those keen on her.