An enchanting batting display by Suryakumar Yadav, hitting his first ball in international cricket for a six, was an enjoyable evening treat.

Another Mumbai Indians product made a sensational start in Ahmedabad in the fourth T20 match between England and India.

Suryakumar Yadav (‘Sky’ to his fans) grabbed the headlines with a scintillating half century studded with six fours and three sixes. He held two smart catches in the deep and helped himself to the man-of-the-match award.

And now the world’s top two T20 teams are ready for the summit clash in the decider in a couple of days at Motera Stadium, Ahmedabad.

India – after being put in for the second time – put in a better performance, posting a stiff target of 186 runs to England. The hero Yadav hit a brilliant half century, studded with six fours and three sixes. 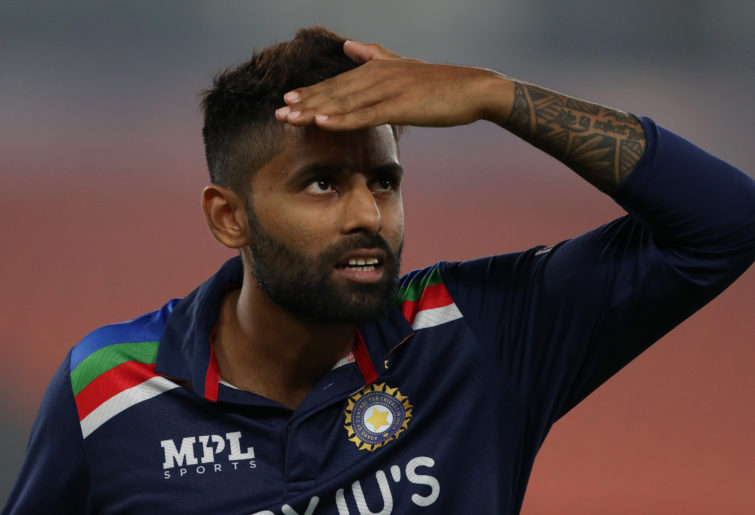 India’s Suryakumar Yadav is making a name for himself in the series against England. (Photo by Surjeet Yadav/Getty Images)

There were some cameo performances by Shreyas Iyer and Rishabh Pant with the willow.

England’s fits-and-starts reply came a cropper in the final analysis. Their mainstay of the last match was Jos Buttler, but his early dismissal saw them into a cocoon until Ben Stokes and Jonny Bairstow retrieved them with a 30-ball, 65-run partnership.

But that was broken by a newcomer Rahul Chahar, the leggie. Hardik Pandya also chipped in with miserly bowling, conceding just 16 runs and scalping two crucial wickets. It was the leg cutters of Shardul Thakur that saw the back of Stokes, holing out to deep cover.

The very next ball, their captain Eoin Morgan scooped a dolly to the deep point fielder. This double strike of Thakur was a shocker for England’s team as it exposed their lower-order batsmen to a gargantuan task.

But this England white-ball team’s never-say-die spirit fought until the end, only to lose the match by just eight runs.

There was high drama in this match. There were some close calls by the TV umpire when India batted. In fact, the third umpire had to concur with the decision of a soft signal of out of the field umpire’s call on couple of occasions.

But there was no evidence of the clean catches held by England fielders, who were given the benefit of the doubt, especially the catch held by Dawid Malan as the fielder failed to hold it and the ball touched the ground before he grabbed it again. The faux pas exposed the TV umpires in a poor light.

And when Jofra Archer lofted Thakur’s delivery for a six off the final over, the ball was retrieved and duly sanitised. But the umpires have to change the ball for wear and tear and the changed ball with dewy condition could not hold properly and Thakur bowled two wides as the ball skidded from his hands.

And the very next ball, Archer’s bat was broken when he tried a forceful shot. And England were left with a saddened face as they fell short by eight runs.