What should the English T20 team do to win the World Cup in India?

Congratulations to India for winning the T20I series against England 3-2.

This series was billed as the curtain-raiser to the T20 World cup, a series played by the tournament’s likely finalists.

England started strongly but lost its way towards the end. What does England have to do to win the T20 World Cup in India? Where did they go wrong? What should they do right the next time they are here in India for the World Cup?

Go easy on theories
Soon after seeing the first couple of matches in this series being won by the team batting second, England dogmatically decided that they will bat second for the rest of the series. If they had one look at the second match, they were in a very good position to score close to 180 or 190 runs when they batted first.

Considering the type of batsmen England have, batting first might not be a bad option. The pitch plays its best in the first innings, and their flat pitch batsmen in the English team can score bigger batting first.

A non-road pitch batting strategy
English T20 batsmen are brilliant on true pitches or ‘roads’, the likes of which they get in England for T20 matches. The slow ball cutters do not grip on these English pitches and come on to the bat nicely. In these conditions, the English batsmen can swing their bat through the line and keep their scoring rate high until the end of the 20 overs.

However, in India, the old ball tends to grip the surface. We saw that in the fifth match of the series the slow cutters from Hardik Pandya, Shardul Thakur and company were challenging to get away once the ball got slightly old. The same bowlers were put to the sword earlier on in the innings by Dawid Malan and Jos Buttler. 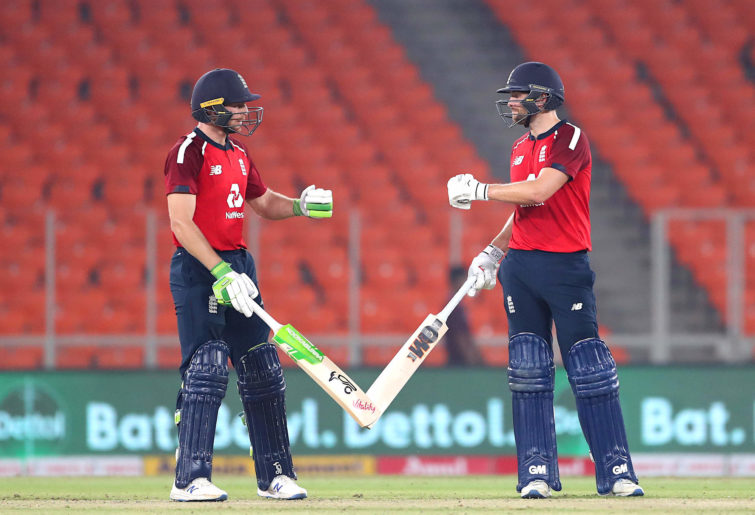 So, English batsmen need to find a way to score against the slow ball variety when they play next in India. They could take AB De Villiers’ advice to Virat Kohli and watch the ball closely before swinging the bat through the line of the ball.

Mark Wood and Chris Jordan should vary their pace and length
Mark Wood bowls 145+ kmph regularly at that hard length and troubles the top-order batsmen. On pitches like the one we saw in the last match of this T20I series, he needs to vary the pace from that hard length. He can watch Hardik Pandya’s methods and learn those hard length cutters to increase his effectiveness in India. These cutters tend to bounce higher as well, making it tough for the batsmen to time their shots.

Chris Jordan specializes in fuller length bowling and mixes the pace at that fuller length. He also needs to learn the hard length cutters that hit the pitch and do enough to disturb the batsman’s timing.

Ben Stokes bowled those shortish cutters that gripped the surface and made it slightly difficult for the Indian batsmen in the fifth match. Mark Wood and Chris Jordan would do well to speak to Stokes for a bit of advice.

IPL 2021 will be an excellent opportunity for the English players to get their act together for the T20 World Cup. The English think tank should create a specific learning plan for their key players like Wood, Jordan, Malan and others and work on it during the IPL.

This English team has the right ingredients to win the World Cup in India this year. However, they do have some areas they need to address if they have to come back with a foolproof team.