After two full rounds of the 2021 NRL season, I have increasing concerns about the six-again rule.

I can totally acknowledge the merits behind introducing this particular rule change and last year it made for a more attractive product.

But the whole idea it was such a runaway success that we needed to have even more of it is a bit of a worry, particularly give the way the rule was brought in – Peter V’landys seemingly just snapping his fingers and making it so.

I’m in favour of a more straightforward approach, rather than the committee method of the past that took so long to achieve so little, but the chairman appeared to go a little mad with rule-change power over the off-season (see: the patently unnecessary two-point field-goal rule).

While the sacred and undefined ‘fabric of the game’ remains intact, if the rate of rule change we saw over the past 12 months continues, we’ll be watching a completely different sport by season 2023, with six-again awarded for any and all infringements committed by the defending team.

Which brings me to the most glaringly obvious issue with the rule.

Awarding six again should give the attacking team an advantage, yet there are situations where it gives the defending side the leg up.

Time and again, we have seen defending teams lie all over the tackled player early in the set. Because why wouldn’t you? When it’s the first tackle and the only disincentive against illegally slowing the play and giving your own team a breather is that six more tackles will be awarded, it just makes sense to stay on the man as long as you can.

Because it’s not six more. It’s one more.

I suspect the best way to fix this issue – and I’m not claiming I came up with this idea – is that the six-again call is only made when you’re in the opposition’s half.

The point of the rule was that an attacking team that was on a roll could press their advantage. But if you’re pinned in your own half and have no advantage to press, it would definitely be preferable to kick for touch, gain an extra 20 or so metres, and start your set again in a more dangerous position.

Again, the aim should be to discourage the defensive team from artificially slowing the play and the most effective way to do so is to disadvantage them with the call. But awarding six more in the attacking team’s half is generally helping out the team doing the tackling.

I know the ref has the discretion to award a penalty for repeated infringements but this just doesn’t happen when a team is working their way out of their end – honestly, it barely occurs when they’re hammering the defence’s tryline.

A straightforward rule that penalties are still blown in the attacking team’s own 50 would act as a disincentive against artificial slowing of the game.

My other issue with the six-again rule came to the fore on Friday night, as I watched the Warriors receive six refreshed sets to the Knights’ zero at the Gosford game.

(On an unrelated matter, we were warned of train lines being closed due to the awful weather, but instead were treated to scenes such as this while enjoying the game at one of Australia’s most gorgeous sporting venues:) 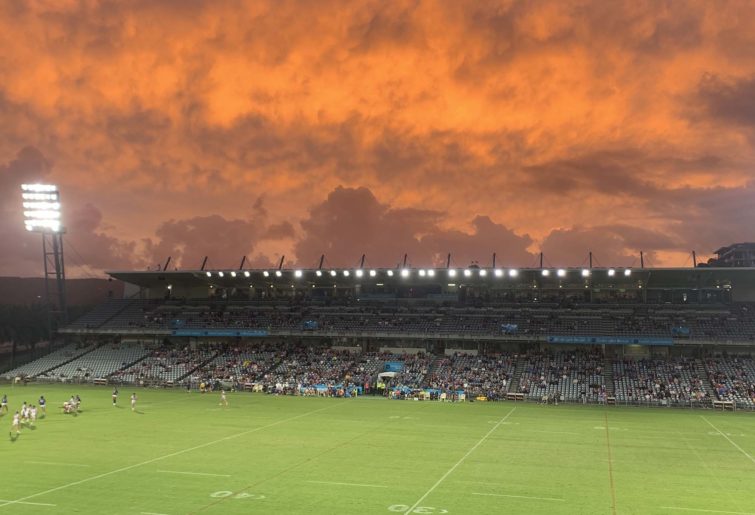 As referee Grant Atkins waved his hand above his head, a call-and-response began to develop: that ear-rattling “ding ding!” would ring out over Central Coast Stadium and fans wearing red and blue would cry out: “What for?!”

Now, I’m not above the fact that outraged fans love to scream this rhetorical question any time a referee gives a ruling against their team.

But in this instance, it’s a fair question.

Because from the stands, the average punter has no idea why the set has been restarted. We see a waving hand, hear a brain-rattling artificial bell, then start the tackle count in our heads again (everyone else does that, right?).

There’s no gesture indicating the specific indiscretion that caused the set to be restarted.

And I want to know.

Setting aside a fan’s desire to complain that their team has been hard done by, it’s hard to get an idea of what’s going on in the middle of the game when a team receives an advantage and all you know is what they got but not why.

I’d imagine players standing too far from the ref to hear them would have similar questions – if you’re out on the wing and just see a hand in the air, surely you want to know what your teammates have done?

This would be especially the case in a game like Friday’s, where Newcastle’s six issues were the result of one ruck infringement and five acts of breaching the ten metres. It paints a picture: this ref is keen on maintaining the ten, so we better stick to it.

My suggestion is not to change the rules, simply the way they are communicated.

I’m obviously not suggesting the ref stop the play to explain the call, which would defeat the purpose of the rule in the first place. Instead, that when the ref waves his hand in the air to signal six again, they immediately follow that with a non-verbal indication of the infringement being punished, as is the case with penalties.

A set is only restarted for ruck or ten-metre infringements (I’m not sure what a marker not standing square is considered, but NRL stats for negative stats only give those two), so we only need two new signals. But it would markedly improve communication with both players and the fans.

The great thing about both these suggestions is that they could be easily and quickly introduced. If they don’t work – although how the second could be anything but an improvement is beyond me – the tweaks can continue, which appears to be the V’landys way, the chairman having previously declared “all rules have to be flexible”.

Well a bit of flexibility is necessary at the moment, because a good rule change is at risk of turning bad.