Morris has joked about offering Paul Gallen a one-dollar contract to make an NRL come back next week, but the reality of the Sharks’ injury toll isn’t funny.

The Sharks are set to lose winger Sione Katoa to an MCL injury after a brutal 28-4 loss to Parramatta at Bankwest Stadium on Saturday night.

Wade Graham, Briton Nikora and Will Kennedy are also in doubt to play next week after all failing HIAs against the Eels and missing the second half of the match.

With stars Shaun Johnson and Jesse Ramien also sidelined, Morris has been left scratching his head as to what his team might look like against North Queensland next week.

“I just said to Gall then I might need to bring him in on a dollar contract,” Morris said, referring to Sharks great Gallen.

“We’ve got a couple of injuries…it’s not going to get any easier but it’s just the next man in mindset.

“The next man will come in and pull the jumper on and do us proud.”

The Sharks defended bravely in the second half on Saturday night with no bench but the Eels ran in three tries around tired bodies in the final ten minutes.

Morris was proud of his side for fighting it out the way they did with players forced to play in different positions all over the field.

“In my 20 years of experience playing and coaching the game, never have I seen a team go down to 13 players at halftime,” he said.

“Our whole side was shot to pieces…just for them to hang on, they were just so brave and showed what they’re made of.

“I’m so proud to be their coach on a day like today.”

Morris suggested he would support a concussion substitute rule being introduced, allowing an 18th man to come on if a player is ruled out with a head knock.

“I would’ve liked another player tonight,” he said.

“If we’re going to be really strict there and rule guys out with head knocks, we also probably need to be a little bit lenient around the plan if you lose three or four like we did tonight.”

Graham, Nikora and Kennedy will all need to move through the return to play concussion protocols this week without symptoms to be cleared to play the Cowboys.

Will Chambers has reminded Penrith players he’s won three premierships to their none in the first sign that rugby league’s most famous acid tongue is back on his NRL return.

Turns out Charlie isn’t, as previously thought, a try-scoring cyborg manufactured by Ivan Cleary in a lab. 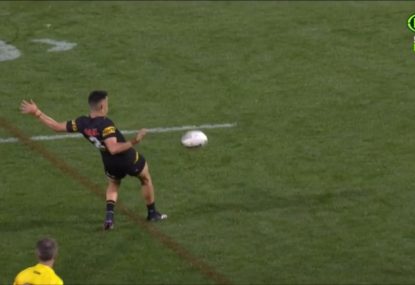 “Nathan Cleary sleight of hand… blink and you miss it!” 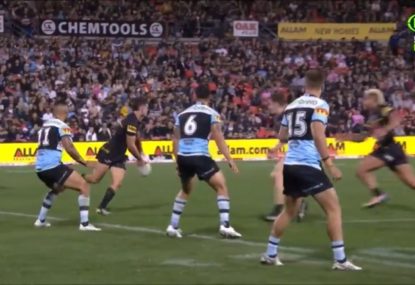 Matt Moylan back for Sharks as they face a halves dilemma

Matt Moylan back for Sharks as they face a halves dilemma

Storm roar home for win over Sharks after Bellamy spray

Craig Bellamy delivered his biggest halftime serve of the NRL season and got the response he was after with Melbourne overcoming a sloppy start to race away with a crushing 40-14 victory over Cronulla.

Storm roar home for win over Sharks after Bellamy spray

It’s taken years, but it finally looks like there’s a sliver of hope for those of us who want the NRL to enforce stronger on-field punishment for high contact. 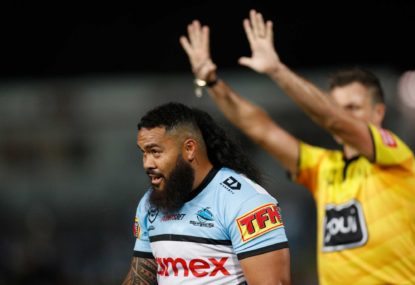