Online abuse is a major problem in rugby league

The King of the World
Roar Guru
29th March, 2021
27
Join the conversation
Advertisement
Write for The Roar

After a disappointing loss for the Newcastle Knights to the Wests Tigers, I have seen a fair amount of bashing from some Knights fans about how players need to be dropped, sacked, take a pay cut or told to go back where he came from, which is downright racism.

As a Knights fan, I am proud we have won two from three with half our first choice spine missing plus a few others like Edrick Lee and Lachlan Fitzgibbon, but I am disappointed we lost to Wests. For a team who made 18 errors, we didn’t deserve to win and some errors which were pretty basic led to tries being conceded.

I would have loved to win but realistically, we blew it and this was a game we should have won. If anything, should our boys pick up drop the whole “easy win” attitude, this loss could be a blessing in disguise.

Dominic Young will only get better as the years go on and it was his debut. Guess who else lost their debuts? Andrew Johns, Kurt Gidley and Paul Harragon and those three legends had great careers for our team. Plus Andrew Johns is still the greatest of all time.

You’re not going to go through a whole entire career without a loss.

We were never going to be undefeated in the season and to all those who were thinking we would be, you really need to face reality, no team goes undefeated in a season these days. Want the Knights to be undefeated? Then do so on season mode in any of the NRL video games. 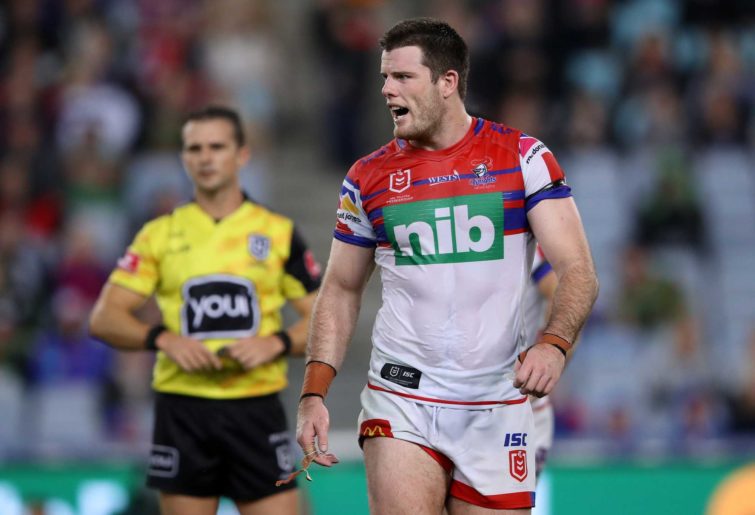 Lachlan Fitzgibbon of the Knights. (Photo by Mark Kolbe/Getty Images)

We have got a long season to go and is fans are here to back our team through the wins and losses. Being a Knights fan is more than just watching our boys play, it’s about supporting them regardless of the result and making the “New-cas-tle” chant loud and proud as we know how to do at home and away.

To all the online “Knights fans” who like to talk about how some of our players are pathetic and not NRL standard, you have three choices.

1. Go to Adam O’Brien, tell him to drop those players then tell him you can do better. You then play and if you play like crap, then you cop all the online criticism.
2. Actually go to the players and criticise them to their face.
3. Shut the hell up!

I won’t name and shame anyone but it’s usually the same people who do it. They rarely have anything nice to say about them but love to be the couch coaching online bashers.

The players do find out who says these things and how do you think they feel knowing people who supposedly go for them bashes them online?

To the players, I for one am proud that despite the loss you never gave up. I would rather us lose with a fighting attitude then us lose while getting flogged. Think in Coach Carter when Richmond played St. Francis in the State Championship.

Richmond were down for most of the match, made a comeback but Ty Crane stole the game in the dying second to steal the win. The coach was proud and so were the fans.

As Knights fans, we need to have the same attitude to cheer on our boys rather than the online “experts” who think they could play better.

The season isn’t done yet and we got a long way to go. When we’re at full strength this year, we will come charging and the competition won’t know what hit them. Let’s get ready for the Knights to take on the Dragons and let’s hope we walk out of the stadium witnessing our Knights slay those Dragons.