As the two sides that finished first and second on the ladder respectively, the Adelaide Crows and Brisbane Lions will each enjoy a week off while they await the winners of two elimination finals to be played this Saturday.

Both will be played back-to-back, with Melbourne hosting Fremantle at Casey Fields followed by Collingwood taking on North Melbourne in what will be the only all-Victorian finals clash until at least the grand final.

The Dees, Pies and Kangaroos stand as Victoria’s best hopes of keeping the premiership cup within their state borders, with the Crows in the box seat to successfully ‘defend’ their premiership from 2019 after no premiership was awarded last season.

Fremantle, the team most hard done by after the season was terminated before the preliminary finals last year due to COVID-19, will have to win three consecutive sudden death matches on the road if it is to win the flag many believed they would have won last year.

Under this finals format, every match is sudden death, meaning there are no second chances – if either the Crows or Lions lose their preliminary finals next week, it is season over.

Here is your preview of the two elimination finals this weekend.

Last meeting in a final
Never, though they would’ve met in a preliminary final last year had the season not been cancelled due to COVID-19.

The first of the two sudden death elimination finals this weekend pits Melbourne, which finished fourth with seven wins and two losses, up against Fremantle, which had won an AFLW-record 11 matches in a row before losing three of their last five games to finish fifth.

The Dees warmed up for April in the best possible way last Saturday afternoon, coming from behind to pip fellow premiership contenders the Brisbane Lions by just two points, with those two points proving the difference against a side that didn’t miss all afternoon (6.2 (38) to 6.0 (36)).

But their win over the Lions came at a cost, with co-captain Daisy Pearce suffering a knee injury from which she should return for the preliminary final against the Crows, should the Dees knock off the Dockers first.

After finishing 2020 undefeated, the Dockers appeared to pick up where they left off when they won their first four matches of this season to extend their winning streak to 11 matches.

However, their form has dropped off over the past month, losing to the Brisbane Lions and Melbourne at home in Rounds 5 and 8 respectively before missing their chance at a home final when they went down to North Melbourne by just a solitary point last week.

They were able to get Kiara Bowers off at the judiciary in the lead up to the match against the Kangaroos after she succeeded in having a dangerous tackle downgraded to below the 100-point suspension threshold.

It meant Trent Cooper’s side had to settle for fifth place on the ladder, and if they are to claim the club’s first senior premiership, they will have to win three consecutive sudden death matches on the road to achieve the ultimate glory.

However, many Freo fans will remember Ross Lyon’s famous “anyone, anywhere, anytime” stance which the men’s club became famous for during his tenure as their coach between 2012 and 2019, most notably on their way to the 2013 grand final which they lost to Hawthorn.

This should give the women’s team some inspiration as they embark on their second consecutive finals series, starting with what shapes as a very tough road trip to Casey Fields, where the Dees haven’t lost since the final round of 2019.

In an interesting side note, the Dees and Dockers would’ve faced each other in a preliminary final last year, but the season (and both clubs’ flag hopes) were ultimately terminated due to the COVID-19 pandemic forcing various jurisdictions to lock down last March.

This will also be the second time the two clubs face each other in three weeks, after the Dees came from behind to upset the Dockers at Fremantle Oval in Round 8, in which Maddison Gay kicked the match-winning goal for her side.

For the winner: a trip to Adelaide to face the defending premiers, the Adelaide Crows, likely to be played at the Adelaide Oval.

For the loser: season over, and for Fremantle, a long winter to ponder what could’ve been.

Hopes of a local premiership will hinge on not only Melbourne, but also Collingwood and North Melbourne, the two teams that finished third and sixth on the ladder respectively at the end of the regular season.

The Pies won their first six matches to sit atop the ladder after Round 6, before losses to the Brisbane Lions and Adelaide Crows on either side of a huge win over St Kilda in Round 8 saw them settle for third place on the ladder. 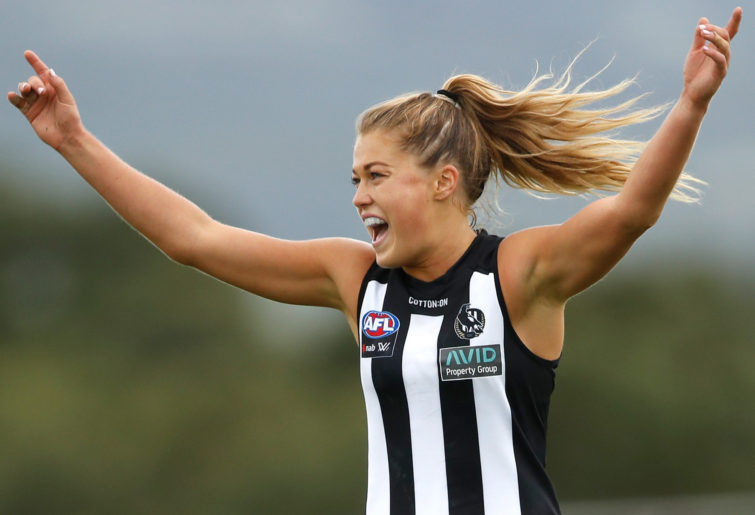 Nonetheless, they finished the minor rounds as the highest-ranked Victorian side and therefore stand as the state’s best hope of premiership glory this year.

Awaiting them will be the Kangaroos, who snapped up the final place in the top six with a gritty one-point win over Fremantle at home last Saturday afternoon, in a result which saw them slam shut the door on the finals hopes of Carlton and the Western Bulldogs.

Darren Crocker’s side trailed by five points at three-quarter-time, but Daisy Bateman’s goal – the only one in the final quarter – was enough for the Roos to claim victory and secure a finals berth for a second consecutive year.

This will be a rematch of last year’s meaningless semi-final, which the Roos won by two points before the season was called off.

The regular season meeting between these two clubs this year saw both sides register eight scoring shots, though it was the Pies who won 4.4 (28) to 0.8 (8) at Marvel Stadium in Round 4.

While North will want to prove that they are not in April to make up the numbers, the Pies’ home ground advantage will get them home in this one.

For the winner: a date with the Brisbane Lions at a venue to be determined*.

*It is unlikely the Lions’ home preliminary final will be played in Brisbane, owing to various states and territories imposing restrictions on travellers from Queensland in light of the ongoing COVID-19 outbreak in Brisbane.