North Melbourne coach David Noble has urged the AFL club and its supporters to remain calm after the Kangaroos were demolished by 128 points in their marquee match against the Western Bulldogs.

The Bulldogs piled on 20 of the last 22 goals of the Good Friday game at Marvel Stadium, with the Kangaroos conceding ten in the final quarter alone.

North entered the season widely tipped to finish towards the bottom of the ladder, with Noble taking over as coach during the biggest rebuild in the club’s history.

After a competitive – albeit heavy – loss to premiership fancies Port Adelaide in Round 1, the Kangaroos have since been dismal in defeats to Gold Coast and the Bulldogs.

Noble, who was previously Brisbane’s footy manager, believes Kangaroos supporters can take heart from the Lions, who won just ten games combined in 2017 and 2018 before then surging up the ladder. 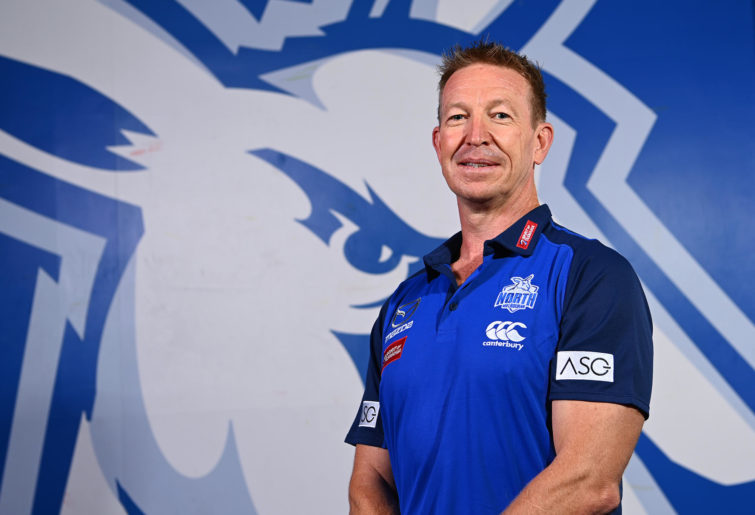 “We just need to be calm. We’re on a journey, we understand there’s hiccups along the way, and today’s a bigger one than maybe what we’ve had,” Noble said.

“When you play such a well-drilled team, it becomes overwhelming. For a younger group that we’ve got, that’s a real challenge to retain that energy and effort and around the ball.

“Hence you end up with something in that last quarter that is unpalatable, but is understandable.

“The turnovers (resulting in the Bulldogs scoring more than 100 points) really hurt us today.

“I know the result doesn’t look great but we have to really maintain that calmness about how we go about our business.”

Noble believes the situation at North will not become worse and pointed to losing two players, experienced pair Jed Anderson and Jared Polec, during the contest.

The result is extra deflating for the Kangaroos, who were determined to put in a competitive showing after their place in the Good Friday time slot was questioned.

Noble conceded a blowout performance could hurt the club’s chances of retaining the fixture, but reiterated that the AFL should look at switching all marquee matches if the Kangaroos’ place comes into question.