Where is Collingwood's strategy?

While we’re only three games into the season, I’m struggling to understand Collingwood’s off-field strategy.
Last season, they carried out their much-publicised list rejuvenation.

That’s a lot of experience to go out of one list.

On the face of it, it seemed an audacious draft harvest that could revitalise the club following three successive seasons they’ve fallen ingloriously short.

But when you break down the list, you get this:

The players with more than 100 games would be considered entrenched and certain starters. These are the players you’d expect to produce something just about every week.

But of these thirteen players, Mayne and Greenwood are now borderline. Will Hoskin-Elliott and Josh Thomas have serially underperformed in the last two years, and in a logical world that their positions would be considered vulnerable.

So we have nine experienced players (mostly) warranting their positions.

The players with 50 – 99 games should just be entering their primes.

Moore is proven elite. As an explosive forward, de Goey is a scary proposition, but as a midfielder he has struggled for consistency.

Mihocek is a workhorse but struggles due to Collingwood’s forward set-up. Cox’s productivity is inconsistent, but he remains the sole key forward prospect. Callum Brown would seem to have the coach’s favour and is given every opportunity but, to date, is still trying to find himself at this level.

This increases the figure of meaningful productivity to 11 – 13, depending where de Goey is played and Cox’s form, which can vary from week to week.

Of the four players with 20 – 50 games, Josh Daicos and John Noble are worthwhile but (this year) spasmodic contributors. Both Sier and Madgen have shown glimpses of potential but are yet to prove themselves.

From the eight players with 1 – 20 games, only Isaac Quaynor has shown that he can already contribute meaningfully. He’s the equivalent of a top draft pick who’s had an immediate impact. While the club is pumping games into Tyler Brown, he’s another who’s struggling.

So that’s just three players from these groupings with what you’d consider bankable input. This is not to disparage any players or to say they won’t make it in the AFL. Tyler Brown might hit 50 games and skyrocket in terms of performances, as so many young players have done before him. But, right now, the equations are different.

If all things were equal, you’d have 14 – 16 players up to senior AFL football, although a number of these players are inconsistent. The remaining positions are speculative.

Compare that to Collingwood’s 2010 flag year, where the only players who might’ve been considered speculative were Jarryd Blair and Brent Macaffer. Or somebody like Richmond, a strong side who can blood young talent and provide them plenty of support and nurturing.

In these cases, inexperienced players have functioned well within a strong framework with a purposeful gameplan.

They’re systems that have helped these players function at the highest level.

The other factor to consider are injuries: Jamie Elliott is now out with a broken leg, and will likely miss the season. So we go from 14–16 to 13–15. Is it likely Collingwood will avoid further injuries? A decade of evidence would suggest not.

That exposes a soft underbelly of inexperienced and/or unproven players – one/third of the team who are unlikely to consistently contribute meaningfully, and twenty players on the list who’ve played less than 20 games, with half of those yet to debut.

This leaves the burden to too few, which highlights that 2021 is effectively a developmental year for Collingwood. Anybody who postulated top-four finishes was being extremely optimistic that so many serial underperformers and young players could form a resilient core as the bedrock of Collingwood’s season.

With Scott Pendlebury 33, Chris Mayne and Levi Greenwood 32, and Jeremy Howe, Jordan Roughead, Steele Sidebottom, and Mason Cox all 30, that’s an ageing top end which delineates the importance of cultivating the next generation.

Come Round 1 against the Bulldogs, Collingwood debuted Oliver Henry and selected Trey Ruscoe. Just one round later against Carlton, Steele Sidebottom returned from injury, which saw Henry dropped and Ruscoe relegated to the injury sub. 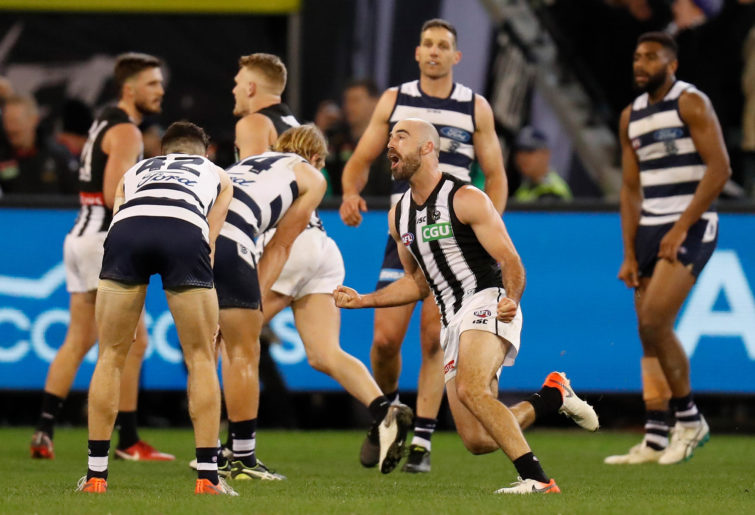 During the game against Brisbane, Mayne suffered a blow to the head. Given his recent history with concussion, it would’ve seemed logical to activate McCreery. Nope. Mayne sat unused on the bench, and McCreery exiled as the sub.

As an aside, I am going to throw in the use of Josh Daicos: from a breakout season in 2020 as an exciting and creative winger to a defensive forward in 2021. This is a side that has lost midfielders (Treloar, Phillips, and Beams), as well as a midfield prospect (Stephenson), so why are they depleting their midfield contingent of the one thing that was unquestionably working last year? It’s a baffling decision.

And here’s the crux of Collingwood’s problem: why are they persevering with known quantities? It’s fine if these players are producing, but they’re not. They are known quantities. What is Nathan Buckley and his coaching staff expecting from the likes of Josh Thomas or Will Hoskin-Elliott that they haven’t seen the last two years?

The club last year sold to the public the claim they wanted to revitalise the list. Comparisons were made to Port Adelaide, who (it was said) did something similar, and shot up the ladder. Yet where have Collingwood employed their youth? Or even selection criteria that would reward effort, rather than incumbents?

An argument might be that the youth are being spared because they’re lacking conditioning. In their wisdom, the AFL has decided to start the VFL season on 16th April – almost one month after the AFL season began on 18th March. God forbid the feeder competition start at the same time (although, presumably this has happened because the AFLW runs concurrent to the opening of the AFL season).

Still, draftees have debuted in the seniors and held their position throughout the season, and surely continuity would help with a young player’s acclimation.

Surely rewarding form with selection, and punishing a continual lack of form by being dropped, is the criteria that’s meant to be established within any sporting organisation.

So what exactly is Collingwood’s strategy?

From the outside looking in, surely Collingwood should be investing in their future, because right now, we’re watching Collingwood’s past, and that’s unequivocally been proven to be not good enough.

It was always going to be a close count between the Collingwood co-captain and the Fremantle star… and it certainly was! 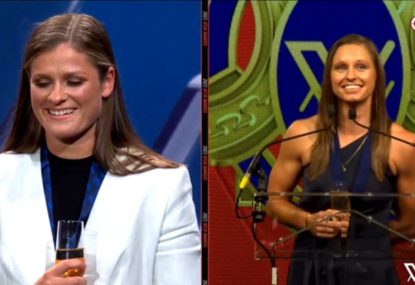 The AFL has fined Collingwood $20,000 for illegal phone use, despite Magpies coach Nathan Buckley blaming the in-game infraction on Jordan De Goey’s concussion.

"I have no desperation in me": Buckley still uncommitted on Collingwood future

The Magpies coach refused to be drawn into whether he would be at the club beyond this year. 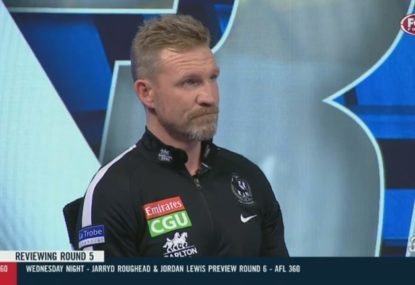 "I have no desperation in me": Buckley still uncommitted on Collingwood future

Regardless of whether Essendon and Collingwood continue to have a monopoly on playing Anzac Day, as they have since 1995, there is always some excitement for many of us Essendon fans when we play Collingwood given the history of these two successful clubs playing each other since 1897.