With coach Stuart Dew admitting his coaching team will have to “get creative” over the next few weeks, the Suns are down to part-timers and project players in their battered ruck division.

Jarrod Witts has been a solid performer for the Suns ever since his Round 1 debut in 2018, winning a year-long ruck battle with fellow ruck journeymen, Dan Currie and Keegan Brooksby.

Foundation Sun, Tom Nicholls, retired from the sport after two years of being unable to crack the Suns AFL side, despite winning the NEAFL Ruckman of the Year Award. Fellow foundation Sun, Zac Smith, was brought back from Geelong to cover the backup ruck stocks, which on game day were being handled by Sam Day and/or Peter Wright.

Brayden Crossley had been seen as a developmental ruck/forward, but the club cut ties with him in 2019 and replaced him with fellow Academy greenhorn, Matt Conroy, who was tracking well until going down with an ACL in the preseason a few weeks ago.

Rory Thompson was originally brought to the club as a young ruckman, going back to defence because the club had a settled ruck division and stacked forward line, but the big fella has been cursed by successive ACLs to each knee and may miss his third season in a row, with the Suns missing his elite shut down last line defence against that might have seen them sitting pretty on top of the ladder had he been able to sit on JK and Tex.

Peter Wright, meanwhile, having been sold by the Suns for a song, gave a commendable Round 3 performance for the Bombers as their starting ruckman, winning the Essendon midfield first use of the ball when the contest was there to win and digging out a handful of clearances.

Almost as a victim of the success of their captain, the Gold Coasters’ ruck cupboard is practically bare as Zac Smith recuperates from a PCL injury and Sam Day’s diagnosis remains uncertain, with no other successor being groomed.

Back up ruckmen are some of the best-paid athletes in the AFL, with many earning a salary well above the average player wage and not playing much if any AFL footy, such is the importance of having a healthy and experienced big man in reserve.

Zac Smith himself hasn’t played at AFL level since returning to the Suns, playing only six games for the Cats in 2018-2019 after 42 games in 2016-2017 when he was one of the top performers in the AFL.

The problem for the Suns now is that they have three problems to try and fix, with height being the central theme to all of them: they are too short in all parts of the ground. Not only have they got to fill the ruck job, but also replace the ruck/forward and potentially bolster the key backs. 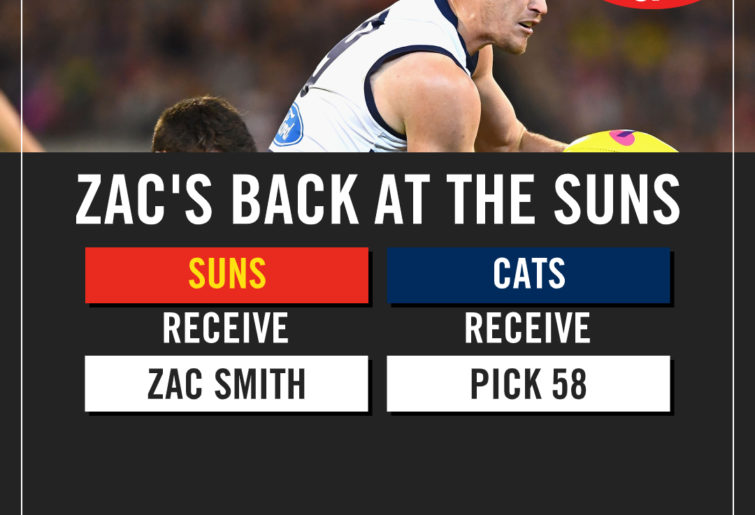 Chris Burgess did a bang up job of replacing Sam Day as the ruck/forward, with the swingman being groomed this season as an attacking weapon having played the majority of his football as a backman before being recruited as a mature player from West Adelaide in the SANFL as part of the Suns’ 2018 concession package to pre-list three second-tier players.

Caleb Graham enters his third year on the Suns ‘list having missed early selection, but featured heavily down back in 2020 after a year in the NEAFL in 2019, however, in his draft season of 2018 he played a lot of ruck for the NEAFL side when injuries last hit this bad, so he’s a viable chop out option.

Hugh Greenwood appears to be part of Dew’s mooted creative solutions, as he often attends stoppages as the nominated ruckman, and although he almost always loses the tap, he is able to provide the fourth midfielder option at the clearances.

The other options were until now smash-in-case-of-emergency measures that must now be looked at creatively for the Suns to be able to remain competitive, a la the Brisbane Lions losing the hit outs 63 – four and yet still beating Collingwood.

Ben King has been floated as an alternative, but realistically with his ten goals in 2021 putting him in fourth place in the Coleman race and zero hitout wins in 33 games, the thoroughbred is likely to only be called on to ruck close to home as the Suns continue to look to him as their focal point for goals.

The left-field selection would be to call upon “the Specimen”, Patrick Murtagh, who at 196cm and 105kg would give many an opponent a physical battle, and with his decathlon background giving him the endurance to run all day and compete, although he has barely played any football beyond some scratch matches last year and so far not even close to an AFL debut.

The 2021 fixture has so far thrown up some interesting tactics from coaches keen to get some mileage out of the longer quarters and fewer interchanges, with West Coast keeping two rucks while Richmond has abandoned the tactic and Brisbane is where the Suns find themselves on the bones of their rucking behinds. 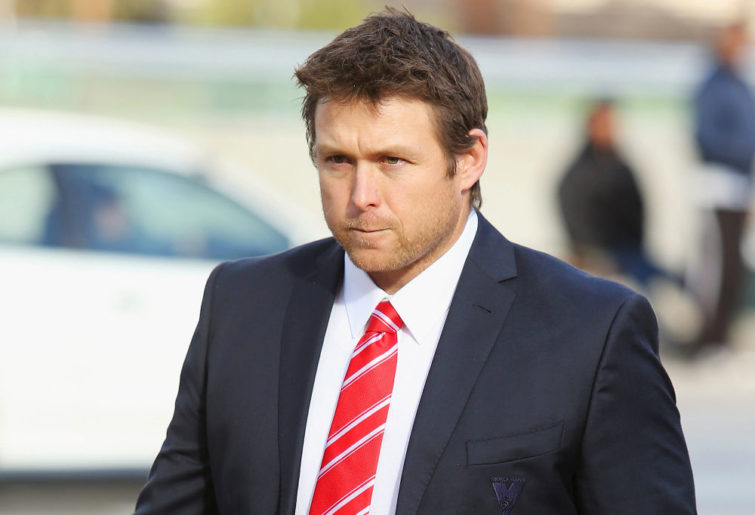 Stuart Dew has some big decisions on his hands. (Photo by Daniel Kalisz/Getty Images)

A hastily organised VFL practice match between Southport Sharks and the Suns Reserves last week showed the depth of the dilemma with an ironic light: Chris Burgess was given a rucking lesson by none other than Brayden Crossley, who was playing for his father’s old side against his former team.

Even with reports suggesting that either or both of the Suns first choice experienced rucks, Witts and Smith, could be back by Round 7 or 8, the next month of games will have to be played without a recognised specialist in the middle.

For Suns fans, next weekend, look for Burgess to retain his spot and Josh Corbett to be brought into the 22, with Witts out and other omissions may relate to the rucking conundrum.

There will be a VFL scratch match between the Suns and Lions reserves, which will give further insight into how the two Queensland franchises manage their way out of their respective ruck shortages. 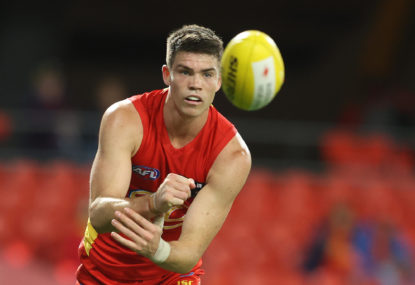