What's going on with NRL players flaunting the face-mask rules?

“Caesar’s wife must be above suspicion.”

I don’t suppose many NRL players read a great deal of Shakespeare, but this quote has been bouncing around my head after more than a few players were seen at the Tim Tszyu fight in Newcastle last Wednesday, and then others apparently were having a slap on the pokies without wearing face masks at a pub later in the week.

I need to put my hand up before proceeding any further: I did both those things in the past seven days.

I enjoyed joining in the chant of “Tszyu-Ca-Stle” in my home town as Australia’s brightest boxing prospect put his most worthy opponent to date to the sword.

Indeed, my mates and I were stoked to see Latrell Mitchell there as part of the proceedings.

Then, over the weekend, I watched on as a couple of my other pals made some poor superannuation decisions with that infamous investment prospect known as Queen of the Nile.

I didn’t wear a face mask once. Because the Hunter is just about the safest place in the world when it comes to community transmission of the coronavirus and it’s in no way mandated nor incumbent upon me to do so.

I don’t worry that footy players have been in the community.

What I do worry about is the perception that NRL players are getting favourable treatment and taking the piss.

I saw the way this could play out last year, as my younger brother and sister live in Brisbane and we weren’t able to visit them.

At a point after lockdown in NSW and Queensland had long finished and life was returning to some semblance of normality, Mum asked that most obvious and fair question:

“Why are footy players are allowed to cross the border and we’re not?”

She was right to ask. It seemed unfair that a bunch of blokes were allowed to hop aboard cross-country flights all in the name of smashing into each other so as to get coated in other people’s blood, sweat and tears.

But I had a good answer.

Then, on game day, they boarded a charted bus or plane, were taken to a highly restricted part of a stadium, played, then boarded that same bus or plane and went home.

That’s why teams of sweaty, bloody footy players were playing what appeared to be a different game to the rest of us when it came to COVID-19 – because they were also adhering to a much tighter set of rules and were taken to task to the tune of tens of thousands of dollars for breaching said rules.

They were largely above suspicion.

All of which was a reasonably satisfactory answer for Mum. 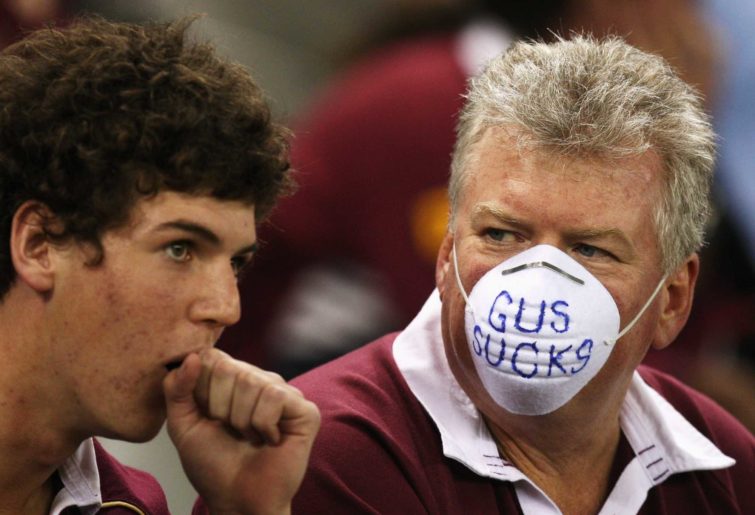 If Maroons fans have to wear masks, why not players? (Photo by Quinn Rooney/Getty Images)

Which brings me back to the events of last week, with reports James Roberts and Will Smith were seen in the crowd at the Tszyu fight, while up to four Gold Coast players were reportedly on the one-arm bandits at a Sydney venue.

None were wearing face masks. And, draconian thought it may seem, all were supposed to be.

And it’s not really that draconian when you consider the flare up that has occurred over the last week or so, which led to games being moved from their original venues.

I mean, that’s why the Titans were in Sydney to begin with – they had been forced to play the Raiders at Kogarah due to the health scare in Queensland.

What’s more, no Knights players attended the fight, held at a venue that’s literally next to their home ground, because the NRL had issued an edict that no players were to do so.

Latrell and Cody Walker being there is kind of suss in hindsight, but they got dispensation from the league, so I’ll leave that particular sleeping dog lie.

Yet Roberts and Smith apparently just rocked up anyway?

Now, I guess I should get to the point. Fire and brimstone and punishments because rules are rules – the whole, somewhat standard Joe Frost thing that I’ve been doing of late.

Honestly, I don’t have it in me.

I don’t know that any of the players in question should be sat out of the game as a result of their supposed indiscretion, even if previous, comparable incidents should dictate that outcome.

I don’t know what’s happened with regards to those six players, because the NRL haven’t said anything about them to date.

Here’s what I do know: perception is reality.

If, heaven forbid, the country or state or even a city is forced into lockdown again – like, say, happened in Brisbane only last week – the average person in the street is going to have reasonable questions as to why those people who are paid six-figure (some even seven) salaries are allowed to flaunt the rules simply so as to spill blood on a patch of grass.

A glib interpretation though it may be, that’s not an unreasonable takeaway with 2020’s toilet-paper wars less than 12 months in the rearview mirror.

And this time around I won’t be allowed to respond, “because they are held to a higher standard than the rest.”

To date, many haven’t been. They were told to, but apparently just decided against it, and head office hasn’t even issued a press release saying that they are investigating it, let alone a series of findings and possible punishments to show that they are an organisation worthy of continuing to be allowed to push ahead with their TV-funded money-making venture should the shit hit the fan again.

I don’t particularly care about the punishments. I just want for justice to be seen to be done.

Not because Caesar’s wife must be above suspicion, but because – as a test of the average person’s attitude to the NRL forging ahead in the face of a global pandemic – Frost’s mum must be satisfied.