Your club's underrated performer: Round 3

Three games in and more elite performances were brought to the fore – but not the media’s favourites. We saw the best of the battlers in the best ways.

Adelaide – Ben Keays
The Tex is back, Adelaide have passed two awesome tests in the first three weeks. Rory Sloane, fresh off his elite part in the ‘Marking Their Mark’ documentary and Rory Laird is still revolutionising his midfield role, but Keays has absolutely ‘locked’ up his spot (I don’t apologise).

The former Lion who 99 per cent of fans wouldn’t know if he turned up in his cornflakes has been really fantastic since crossing over to West Lakes.

He was one of the most improved last year and against the Suns, had 26 disposals, five inside 50s, five marks and five score involvements.

He had a good finish in front of goal and even had four clearances in a clinically awesome performance.

Brisbane – Grant Birchall
It was a night of ‘the usuals’ for the Lions with Hugh McCluggage, Daniel Rich, Dayne Zorko and Jarryd Lyons dominating in the midfield and the former Hawk took on the role as the ‘mop’ for the Lions.

A dozen marks and eight score involvements was the night for the Tasmanian, who still uses the footy well, going at 86 per cent.

Carlton – Eddie Betts
Apologies to the likes of Liam Jones, Sam Docherty, Michael Gibbons, Jack Newnes and Adam Saad who all perfectly qualified for this segment but it’s gotta be Eddie.

In his 200th game as a Blue, the magician lit up Marvel Stadium with his dribble goal and only had four touches on the day but if you watch a replay, watch how he blocked and created space for Harry McKay a lot but I’m taking this chance to celebrate Eddie, what a champion bloke and champion small forward.

Collingwood – Jordan Roughead
One of the best ‘under the radar’ pickups in recent times, the former Dog is not the flashiest defender Collingwood has and even with the likes of Jeremy Howe, Jack Crisp, Brayden Maynard, Isaac Quaynor and Darcy Moore, he is often left behind in discussions.

However on Thursday night, Roughead had 20 touches (of which 17 were kicks) and didn’t waste a single one, going at 100 per cent efficiency! He also took a season high 17 marks, repelling Brisbane attacks, particularly as they dominated the third quarter but the Pies still won it.

Essendon – Brayden Ham
Haven’t seen this bloke play a better game of footy. Speaking of blokes who half of the AFL fan-base wouldn’t recognise if they turned up in their cornflakes, Ham is one of those blokes who at times can look ordinary if things aren’t going well, hopefully this is the start of some consistency.

A previous career-best of 17 touches was bettered by eight on Saturday, took nine marks, had eight score involvements and five inside 50s. On a day where the Bombers reignited the faith in their group, Ham reignited faith in himself and his spot.

Fremantle – Stefan Giro
This piece could just be a full ‘wouldn’t know them if they charged at you with a machete’ exploration but Giro was a positive on a day that the Dockers would rather forget.

Sixteen kicks among his 20 touches and went at 75 per cent efficiency, took eight marks, had six score involvements and kicked a goal, Giro is one of only a few Dockers who can sit in the review and say ‘I tried my butt off’.

While Mitchell had only the three touches in the first quarter against O’Connor’s nine, the rest of the day was a battle and O’Connor’s dash and ball winning ability was fantastic. his 26 touches at 80 per cent, eight clearances, eight tackles and seven marks made it a very good day out, adding in five inside 50s as well.

Gold Coast – Noah Anderson
After a best on ground performance last week, unless the No.2 pick from the 2019 Draft had another 35 it would be seen a downgrade game but he was one of the Suns’ best yet again.

26 disposals (18 contested) and seven clearances are the type of stats that this young man is producing and it’s a joy to watch. Matt Rowell has been the bride but this maid of honour is a bloody good footballer himself.

GWS – Lachie Ash
The former No.4 pick from the 2019 Draft managed a dozen games in his debut year and his first two this year he’s been solid but on another poor day for the Giants, he stood up and played his role.

He had 17 kicks among his 24 disposals, went at 70per cent, took half a dozen marks and had five rebound 50s. For such a high draft pick, the Giants seem like they’re onto a winner there but need to get in gear.

Hawthorn – Jack Scrimshaw
‘Grant Birchall 2.0’ was plucked from the Suns at the end of 2018 and the former top ten pick was very good in 2019 and had an injury interrupted 2020 and pre season.

After being the sub last week, Will Day’s ankle fracture has opened the door for him to assert himself in the next two months. 22 touches at 77 per cent, an equal team high ten marks and three rebound 50s is a very good start.

Melbourne – Jayden Hunt
Criticised during his career for only flashing through matches and one way running have plagued Hunt but for every bashing there needs to be credit when the script is flipped.

25 touches (18 kicks), had seven inside 50s and three rebound 50s, laid three tackles, grabbed five marks and if some more performances like this can keep coming through from Hunt, he’s a lock for the best 22. 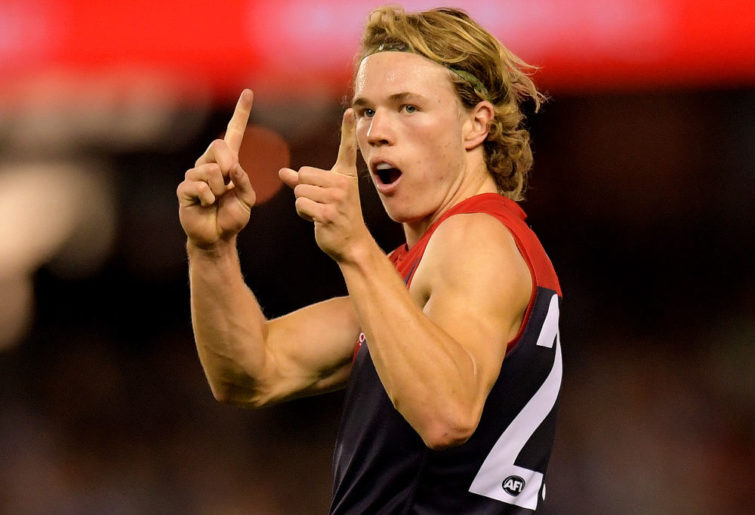 North Melbourne – Jaidyn Stephenson
When you lose by 128 points, looking for positives is really hard, really hard indeed. Jack Ziebell’s kick in/back pocket role was inflated due to the forward dominance of the Dogs and the term ‘underrated’ in a performance like this is extremely difficult.

Alas, I digress. In the clash of the ‘recycled Pies’, Adam Treloar played one of the best games of his career and Stephenson had a solid crack. Far from their worst, he was their only multiple goal kicker, had 19 touches, had three clearances and a couple of rebounds.

Port Adelaide – Karl Amon
Ever since the rumours of a move to Hawthorn surfaced strongly at the end of 2019, Amon stayed on and has gone from to strength. As a hard working outside mid/winger, he has dash, class and good foot skills.

On Saturday night, he had 23 touches (15 kicks) and went at an elite 78 per cent efficiency. He took eight marks, laid five tackles and had five score involvements. He worked both ends at the ground too with three inside 50s and three rebound 50s.

Richmond – Kane Lambert
Richmond may have had their down day and if anyone has deserved it it’s them but in a performance that was terrible, it was hard to find a winner but one of the most underrated Tigers period was very solid.

Lambert had 22 touches, a team-high eight score involvements, took six marks, had four tackles and had three inside 50s on a rough day for the lads from Punt Road.

St.Kilda – Jack Higgins
For a lot of this game, it seemed like it was Essendon versus Jack Steele and witches hats but Higgins was far from disgraced on Saturday twilight.

‘Snags’ added another three to his collection and used his 17 touches really well and had eight score involvements but make no mistake, a lot of soul searching is needed at Moorabbin.

Sydney – Josh P Kennedy
These kids are special. The first two rounds have been all about Errol Gulden, Logan McDonald and Braeden Campbell and rightly so but after Saturday afternoon, it will become about Sam Wicks and Chad Warner also and again, rightly so.

However, their oldie is still a goodie with Kennedy racking up a lazy resume of 27 touches (15 contested), eight score involvements, seven inside 50s, seven clearances, took five marks and went at 70 per cent. Brilliant effort.

West Coast – Shannon Hurn
You may not be able to teach an old dog new tricks but what about exceeding the expectations with the tricks you’ve had for over a decade?

The former skipper is close to All Australian form. In the big win over Port Adelaide, he had 26 disposals (21 kicks) and didn’t waste any, going at 92 per cent efficiency, grabbed half a dozen marks, had six score involvements from defence and had five rebounds well. This old boy is still a beauty.

Western Bulldogs – Tim English
How good has the inclusion of Stefan Martin been? This man has been allowed to flourish and go to that next level and he has started the year on fire.

Against an ageing but quality Todd Goldstein, English had only the eight hitouts but his role was around the ground. Eight marks (three contested), 16 touches at 81 per cent efficiency, six score involvements and three telling goals was an elite day at the office. 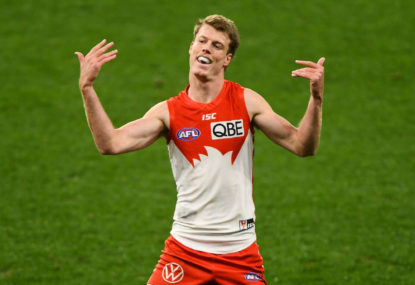