Victorian fans will get behind both the Pies and Dees as they stand as the state’s best chances of premiership glory this year, but both face tough preliminary final clashes on the road against the Lions and Crows respectively.

Both the Magpies and Demons outlasted North and Freo in their respective elimination finals, with the Dees’ win ensuring that Daisy Pearce remains a chance to face the Crows after missing her side’s win over the Dockers due to a knee injury suffered in the final round.

However, the Crows and Lions start favourites to win through to the grand final, which could see either the Crows cement themselves as the greatest side in the short history of AFL Women’s, or the Lions claim their first premiership.

So, can the Collingwood and Melbourne ensure Victoria is represented in next week’s decider, or will the Adelaide and Brisbane claim the cup?

The Crows, who carried over their defending premier status into season 2021, won seven of their nine games to finish the season in pole position, only topping the ladder for the first time after defeating Collingwood at home in Round 9.

One of their two losses in the regular season was against the Dees in Round 7, as Mick Stinear’s side dominated from start to finish to win by 28 points and hand the Crows their second-worst loss for the year.

As for the Dees, last week they defeated the Dockers for the second time in two weeks, this time at home and without injured captain Daisy Pearce, to advance to the preliminary final for the second year in a row. 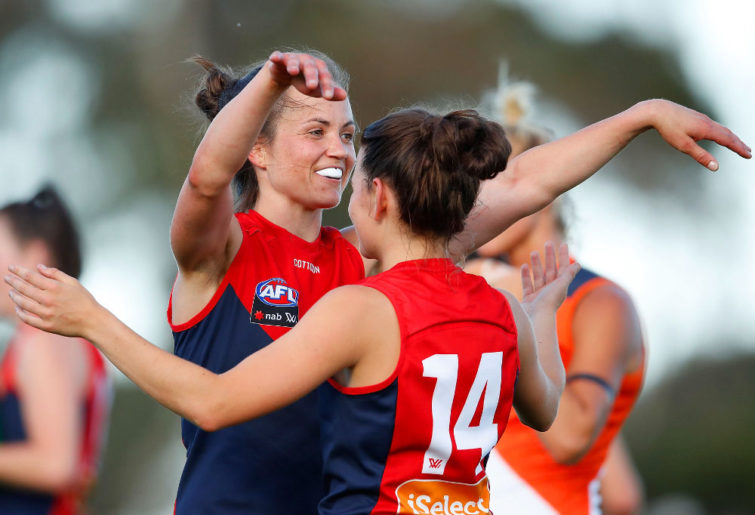 Daisy Pearce of the Demons. (Photo by Scott Barbour/Getty Images)

It kept intact their undefeated record at Casey Fields for a second year running and also saw Stinear become the first coach in AFLW history to reach 25 wins.

This will, however, be the first time they actually play in a preliminary final, after their match against Fremantle last year, and henceforth the season, was cancelled shortly after the COVID-19 pandemic was declared.

It will also be the first time the club plays in Adelaide and while Melbourne may have won their Round 7 encounter comfortably, facing Adelaide in the City of Churches is a tougher proposition.

At home, the Crows should win through to their third grand final, which will be played at home regardless of who they face.

For the winner: if the Crows win, it’s a second home grand final at the Adelaide Oval in three years, or if the Dees win either a trip to the Gabba to face the Lions or stay home and face the Pies at Victoria Park.

Six months after the Brisbane Lions men’s team failed to win a home preliminary final, the women’s team have the chance to qualify for their third grand final.

Another strong season from Craig Starcevich’s side saw them finish second on the ladder, also with seven wins from nine matches but finishing behind the Crows, to whom they lost in Round 4, on percentages.

In their final regular season game, the Lions had the chance to claim their second minor premiership, but despite a strong first half against Melbourne, and finishing with six majors from as many scoring shots, suffered a two-point defeat at Casey Fields to settle for second.

24 hours after that match, the Pies also had the chance to take top spot, but ultimately settled for third after losing to the Crows at Norwood Oval in the minor premiership play-off.

Last week, Collingwood, playing in a finals series for the second consecutive year, edged out North Melbourne by six points at Victoria Park, reversing a heartbreaking two-point loss in the quarter-final last year.

Steve Symonds’ side had trailed by 14 points at three-quarter-time, but goals to Kristy Stratton, Chloe Molloy and Tarni Brown saw the Pies storm home in the final quarter.

Now they get the chance to travel to Brisbane, four weeks after their Round 7 match, which the Lions won by three points, was moved to the Whitten Oval in the wake of a COVID-19 outbreak in the sunshine capital.

We have seen the Lions and Magpies men’s team engage in a pair of grand finals, in 2002 and 2003 (both won by the northerners), hopefully the success the men enjoyed back then should inspire the women to qualify for their third grand final (and first since 2018) this Saturday.

For the winner: if the Lions win, and the Crows lose the first preliminary final, it’s a home grand final at the Gabba, but if the Crows do win then the Lions will travel to Adelaide for the decider, or if the Pies win either a trip to the Oval to face the Crows or a ‘home’ grand final against Melbourne.

Permutations
If the grand final is between:
• the Adelaide Crows and Brisbane Lions or Collingwood – the Crows will host it at the Oval, having finished the regular season as minor premiers.
• the Brisbane Lions and Melbourne – the Lions will host it at the Gabba, likely as a curtain raiser to the Lions vs Essendon men’s match on Saturday night, or on the following day in a standalone timeslot.
• Melbourne and Collingwood – it will likely be played at Victoria Park, as the Pies finished higher than the Dees on the ladder.