The never-ending search for 18 fit ruckmen

Just like in the NFL, which has been defined by cynics as a never-ending search for 32 fit and capable humans to play quarterback, the AFL each season undergoes a feast and famine.

Club to club, teams battle to keep a group of inhumanly tall players together fit enough to keep the team competitive in an era where the best ruckmen are on a different planet compared to the veritable juvenile giraffes in development.

The AFL has evolved to the point now where 13 of the 20 records for most hit-outs in a season since 1965 are held by the top half dozen current ruckmen, with another five records held by recently retired players, the other two belonging to VFL legends, Simon Madden and Gary Dempsey, who held all the rucking records worth holding until 2013.

And yet, out of all those record holders, not one played in a premiership in the year their records were set, although several were in losing grand final teams and many made finals.

In a sense, for a statistic that is so highly valued and a position that is handsomely paid – even back-up ruckmen who rarely play at AFL level still earn more than the AFL average – there isn’t a lot of evidence to back up the contention that winning the hit-outs is necessary for team success.

As if to prove that anomaly is true, there isn’t a stat for losing hit-outs because winning the tap is never the be-all and end-all when it comes to the statistical outcomes for stoppages.

In a small sample size, 2021 is already offering up long injury lists and banged up rucking corps, with two months before clubs can go to the midseason draft for relief from among the washouts and rejects of past seasons.

Here we take a look at some of the part-timers whose performances in the ruck have been seriously underestimated so far this season.

Tom Fullarton
Basketball convert Tom Fullarton was thoroughly beaten in hit-outs in Round 3 against All Australian ruckman, Brodie Grundy, while filling in for the injured Oscar McInerny as Brisbane endures a temporary ruck crisis. Winning away on the road to break to club’s duck for 2021, it wasn’t so much as Fullarton’s negligible three hit-outs as his continued efforts to compete and scrimmage his way through contests to collect five clearances and keep his team in the game.

Honourable mention goes to Connor Ballenden, the Lions rookie that went against white-hot Grundy and the second biggest human to ever play AFL in Mason Cox, winning only one tap out of 19 contests in barely over a half of game time. 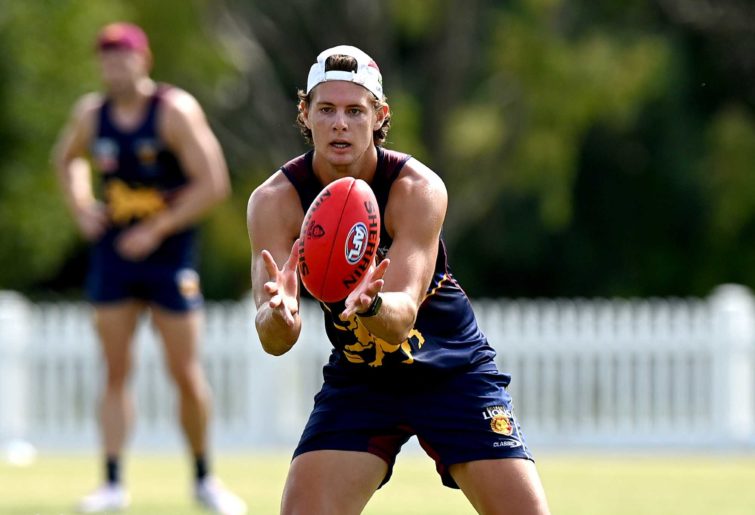 Chris Burgess
In his one and only game for 2021 so far, Chris Burgess had 36 ruck contests against Adelaide, winning only eight hit-outs, yet he was able to claw back two clearances and apply pressure after the tap that helped the Suns convert a minus two hit-out differential to a plus eight clearance count.

He played the ruck-forward role as well as either of his predecessors in Peter Wright and Sam Day, then manfully took over ruck duties in the final quarter and a bit after Jarrod Witts went down, losing a barrage of taps against Reilly O’Brien and yet influencing the stoppages enough for the Suns mids to remain in the contest.

A pair of goals for the ruck-forward fill-in should give Stuart Dew some confidence as the Suns face life sans their monumental co-captain.

Peter Wright
Two-metre Peter AKA “the prettiest girl at the dance” has come away from his first AFL match as the number one ruckman in a 75-point winning team – enjoying that Gatorade shower in the red sash – albeit going up against a pair of part-time rucks in Shaun McKernan and Jake Carlisle.

In fact, the Essendon versus St Kilda game featured eight players who registered a hit-out, and even though the Bombers came out minus nine in total hit-outs, they were plus six in clearances, with those numbers even more stark earlier on before the result was foregone.

The maligned former number eight draft pick had his best day in the ruck of his career with 19 hit-outs from 50 contests, yet he got down and won his own clearances, as well as winning the one-percenters. Could be the defining season if he can keep producing that brand of ruckwork.

Lloyd Meek
After spending his first three seasons toiling away at the bottom of Freo’s ruck brigade, Lloyd Meek has emerged as the unlikely foil to stablemate, Sean Darcy, as the ruck duo continue to give the Dockers midfield first service.

What makes this experiment so interesting is that Fremantle had been appealing for their rookie tall forward, Josh Treacy, to be cleared to play after a two week WAFL ban threatened to wipe him out until Round 5 of the AFL.

However, with the 18yo ruck-forward cleared to play, they opted to persist with their greenhorn duo of Meek and Sean Darcy, falling to a second loss from three games.

While the results don’t reflect Meek’s encouraging performances, the Dockers are missing no fewer than five talls from their first choice line up and will continue to experiment until they can get some studs back from injury.

Tom Hawkins
With Mark Blicavs and Rhys Stanley getting a bath from one of the more dominant ruck duos of 2021, Ben McEvoy and Jonathon Ceglar, the Tomahawk chopped out for ten contests close to goal, winning five of them, to mitigate a woeful night of shots at goal and help his team win a tight contest.

Even with both sides going in with a pair of rucks, the toll of such relentless tactical defensive footy meant that Hawkins’ cameos in the ruck took the load off the 82 total ruck contests and giving Blicavs especially the extra juice to bring the Cats home.

Geelong must be sanguine about their ruck division, with Josh Jenkins on call to fill in at ruck-forward, Darcy Fort in reserve if Stanley goes down, plus Esava Ratugolea to come back later in the season and a pair of 18yo kids in development won’t get near an AFL side this year.

Tom Hawkins of the Cats (Photo by Quinn Rooney/Getty Images)

Stef Martin
The former Demon and Lion joined the Dog Pound in the offseason to meet a particular need that the Bulldogs had to address after going out of the finals at the first hurdle.

In no way is the declining veteran setting records or winning games off his own tap work, however, the Dogs have seen off three of the elite ruckmen of the current generation in Brodie Grundy, Nic Naitanui and Todd Goldstein, with Martin taking the brunt of the majority of the contests, allowing the midfield machine to shark the clearances and win every game so far.

The net effect is that Tim English has been able to play his more natural game, providing a marking target and kicking goals. It has the makings of a premiership ruck duo, although if injury strikes there’s not much left in the ruck cupboard at Whitten Oval.