Remember when holding the ball made sense?

Remember that scene, once upon a time, when holding the ball made sense?

That moment when a player decided to take on the other team? He or she took off with the ball in hand, accelerated, and pushed away those who tried to catch them. It was a state of invincibility.

Then there was that magnificent point in time when the plan was foiled. The ball-carrier was caught. Like a predator, the tackler somehow gripped a loose piece of guernsey. The victim buckled at the knees. The crowd erupted ‘Baaaallll!’ with gladiatorial fervour.

Everyone turned to the figure in white, who paused and then bent forward at the waist, almost as a bow to honour the tackler. The ump’s arms crossed over and extended out slowly, like an act in Swan Lake.

The fallen player looked up to the umpire with a face of despair. The crowd showed their collective appreciation with a booming ‘yeeeesssss’. The ball was handed to the tackler like a trophy, so that he or she could step back for the free kick they had rightfully earned for the team.

It was one of the great elements of the game. 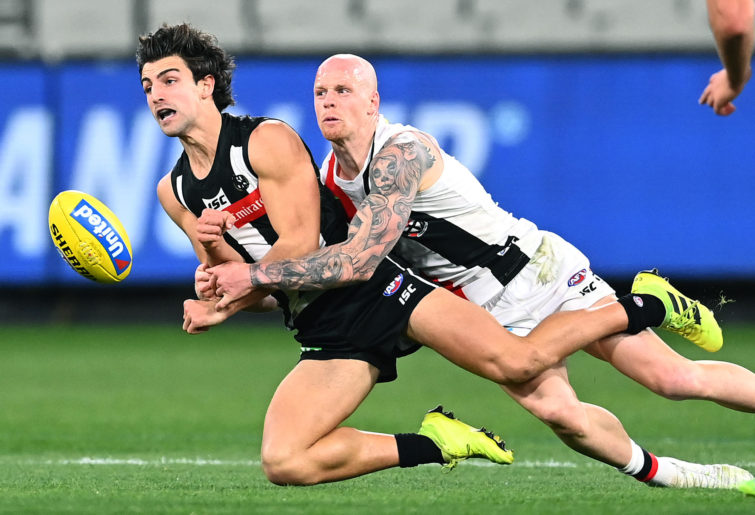 But now the once glorious scene has been distorted into a confusing mess. These days, the tackler might not receive the final reward because of the modern interpretation: as long as you correctly dispose of the ball within a couple of seconds of the tackle, this is an adequate antidote to the ball-carrier’s predicament.

Despite taking on the world and getting caught, he or she has one or two seconds to consider options for a handball or kick – even just a grubber along the ground, ending the scene as a sad and anticlimactic diminuendo.

The issue, however, is made even more profound by a different situation. A player picks up the ball and motions in readiness to handball or kick the ball. Instead, the ball is knocked out of his or her hand or someone crashes into the player, causing them to spill it.

Despite the lack of a tackle, and its obvious inconsistency with the interpretation described in the previous paragraph, which is much more generous to the ball holder, this is often judged as incorrect disposal: holding the ball.

Likewise, players are given holding the ball when they are at the bottom of a pile-up of other players, and are unlucky enough to have the ball pinned under them.

How could the majesty of holding the ball be reduced to a pitiful decision of convenience to give the ball to someone so the umpire can keep the ball moving?

To add to the confusion, if the ruck catches the ball from a boundary throw-in and is tackled, this is not considered prior opportunity and is a ball up.

A chief antagonist in this plot is the incorrect disposal element. Somehow, about five or so years ago, it crept into our great game and took over. How you dispose of the ball, or try to, has become the most important thing. It is much more important than prior opportunity and the tackle.

The rule is now a pitiful, enfeebled version of its former self. It used to be a simple rule, designed to prevent a player from easily traversing the field from one end to another and to reward the tackler, if the ball-carrier truly had prior opportunity.

This traditional form of the rule is the one still seen in state leagues, which have more faithfully preserved it. The AFL believes it needs to artificially pump up the speed of the game despite other adjustments, including the tin-man rule and six-six-six rule, already doing this.

The holding-the-ball rule is like a 1978 Torana that you bought new. Over the years, you made modifications to it. You added spoilers, bonnet scoops and an exhaust system, lowered it and put on pinstripes, thinking it would make the car look faster and cooler.

But over time you realised that it wasn’t really a true Torana anymore. You’d ruined it. So you decided to take off all those bits and get it back to the classic car you remember.

It’s time to have a good look at the holding-the-ball rule, remove all of the modifications, and bring it back to the classic rule we all remember.