Your club's underrated performer: Round 4

Everyone knows how this works by now. Every team has one or two players who the media talks about non-stop, but who stood out in Round 4 but aren’t getting the love they deserve at your club?

Adelaide – Harry Schoenberg
Channel Seven seem to know him only as the son of a farmer, but this kid can play – and not only play, but play very well.

North stayed close to the Crows, but Schoenberg was a real thorn in the side with his 20 disposals (15 kicks), which he used exquisitely, going at 90 per cent. He kicked two goals, had nine score involvements, had six marks, laid four tackles and had six inside 50s. This kid is a gun.

Brisbane – Harris Andrews
It’s pretty rare that an All Australian and perhaps the best key defender in the game could go underrated, but on a blustery day marking the footy was key, and Andrews did that to a tee.

An equal game-high dozen marks, a dozen contested possessions and only his tenth goal in his 101st game – the Lions are struggling and positives are hard to find at the moment, but he’s one.

Carlton – Sam Petrevski-Seton
A whipping boy for the last season and a bit, SPS has been confined to a back pocket role and his ball use has been put under the microscope, but for as much as the footy fans whip, they need to acknowledge the good performances.

It was certainly a good performance from Petrevski-Seton, with 23 touches (15 kicks) at 73 per cent and ten grabs. He also had four score involvements and four rebound 50s.

Collingwood – Jack Madgen
The former basketball product has taken some time to find his feet at the Holden Centre but produced a career-best performance in a tough night for the boys in black and white.

A career-high 25 disposals (it was previously 19), three marks and three score involvements along with an unreal 556 metres gained, five inside 50s and four rebounds was a superb night. He even kicked a snag.

While he does need to work on his ball use, this was a performance based on what a lot of Magpies didn’t have on Saturday night: heart.

Essendon – Dyson Heppell
The skipper slotted straight back on a halfback flank, Jack Ziebell style, and barely missed a step.

He used his 23 touches at 82 per cent efficiency, took an equal team high eight marks and had four rebounds as the Bombers came oh so close to an unreal upset.

Fremantle – Heath Chapman
In just his third game of footy Chapman announced himself as a quality first-round pick for the Dockers, and although he won’t get a Rising Star nomination this round, expect him to get one eventually.

He had 18 disposals at 83 per cent, took four grabs, had four score involvements and had 260 metres gained, but his best moment came late, with the game all but over, when he smothered a snap at goal to raucous applause from the home crowd.

Geelong – Tom Atkins
From a pressure small forward who had an impact from time to time to a genuinely damaging defender, the 25-year-old is in terrific form, without a doubt.

With more teammates taking the spotlight than most people have had hot dinners, Atkins had 25 touches (ten contested), had 14 pressure acts, laid four tackles and took five marks. The Cats need answers quickly, but he isn’t causing poor questions.

Gold Coast – Wil Powell
A relatively unknown player among casual fans, Powell’s attack on the ball and want to keep the ball in forward motion is a standout.

In a dour affair at Metricon, Powell’s 21 touches at 71 per cent, four rebounds, three marks and 354 metres gained was a good performance from the 21 year old from Scarborough.

Greater Western Sydney – Lachie Ash
While the footy world is divided over their bias over Toby Greene – anyone who thinks a five-goal performance in the wet to drag an undermanned Giants side to an unlikely five-goal win against the shortest-priced favourites in the whole round is kidding themselves – the former No. 4 pick is quietly having a career-best year.

Not only did he quell Collingwood’s attacks, but he set up ones for GWS as well. Ash had 28 disposals, took 11 marks, laid four tackles, had four inside 50s and had five rebounds.

Hawthorn – Chad Wingard
It’s very rare for the Chad to be underrated, but his two games this season have been a couple of his best at Hawthorn.

He had 26 touches on Sunday, took seven marks, laid five tackles and had 20 pressure acts (he’s not known for his defence but brought it in spades) but he also showed offensive prowess, and a nice right-foot snap and eight score involvements ticked off a good day for the Chad.

Melbourne – Tom McDonald
This could be a career-best game in which he didn’t hit the scoreboard. Very few Dees were more under the pump than TMac coming into 2021, but he produced a very good performance on Sunday afternoon in conditions that didn’t suit him on paper.

With nine marks to go with 21 disposals at 71 per cent, the big fella took a couple of contested grabs, fell just short of 300 metres gained and had 14 pressure acts. He is going under the radar at the Dees in 2021. 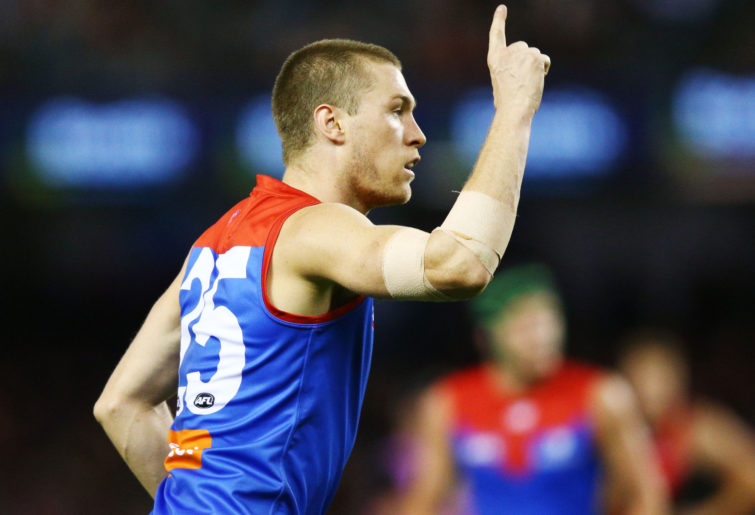 North Melbourne – Tom Powell
One of the best prospects in the draft outside of the big three talls, the South Australian product had been solid in his first three games but produced his best on Sunday.

He laid a team-high eight tackles and had 19 touches at 78 per cent efficiency, showing his two-way ability. He had himself a couple of clearances and an unbelievable 29 pressure acts.

Port Adelaide – Xavier Duursma
Shout-outs to Aliir Aliir, who has started magnificently for the Power, and Ollie Wines, who’s marking has been unreal, but credit is for the third and last 2018 draftee to go down. For the first three quarters Duursma had had a moment or two, had a dozen touches and kicked a goal. He was one of the contributors without being fantastic.

But then Richmond threw everything at Port, and Duursma’s two-way running, dash and composure came to the fore. He had nine touches in the last quarter to finish on 21, took six marks, had seven inside 50s and took six grabs. If it is a confirmed ACL injury, then I wish him all the best in his recovery.

Richmond – Kane Lambert
He’s the most underrated Tiger during their premiership run, full stop. Shane Edwards used to be until fans seemed to catch up, but Lambert isn’t mentioned in the glowing terms he deserves to be.

On Friday night he went about his business and then some, having 24 touches at 79 per cent efficiency. He had ten score involvements, including two goals, and laid four tackles and took three marks. This man is a star. 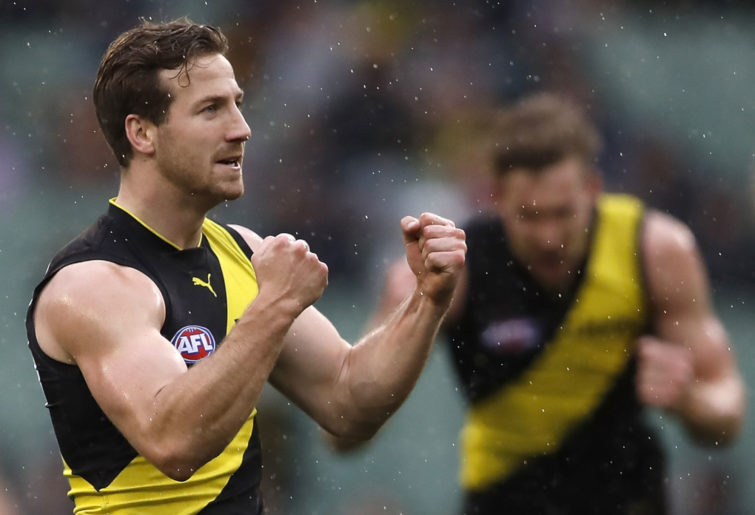 St Kilda – Daniel McKenzie
Another player who quietly went about his business on Saturday afternoon as the Saints put the Eagles to the sword, McKenzie was unbelievable.

He collected 21 disposals (seven contested) and used them brilliantly at 85 per cent. He had seven score involvements, took seven marks, had three clearances and had three tackles. Inside the walls at Moorabbin he’ll be lauded, and the fans should do the same.

Sydney – Dane Rampe
Rampe is pound for pound the best one-on-one defender in the league, and anyone who wants to debate that, I’m down.

The co-captain stopped numerous Essendon attacks as they held on in a thriller, and while 15 touches may seem modest, his ten grabs were outstanding and he was rarely outworked. He went at 86 per cent efficiency too and was fantastic.

West Coast – Tom Barrass
For anyone fully aware of how good Jeremy McGovern is – he was one of the best, if not the best, on ground for the Eagles – his second in command was almost as good. Yet barring Garry Lyon’s comments when he took his ninth and final mark, we didn’t really hear a peep about him.

Not only is he the Robin to McGovern’s Batman, but he can’t be mentioned without Gov, and although that’s true in this piece, his CV for the day deserves isolation: 14 touches at 85 per cent and nine marks (four contested). His last year and a bit has been fantastic.

Western Bulldogs – Bailey Dale
It seems the Bulldogs have 27,412 midfielders at the moment, so their pieces are almost exclusively the blokes outside of the square, and Dale was terrific.

Had himself 21 disposals at 76 per cent efficiency, and he took five marks and had seven rebound 50s. With the Dogs’ headline acts forever hogging the headlines, Dale deserves the due credit. 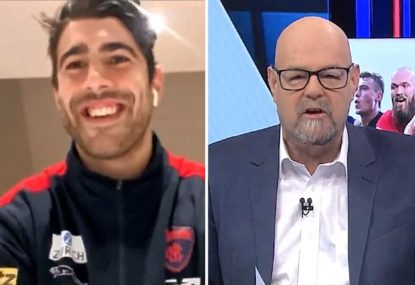 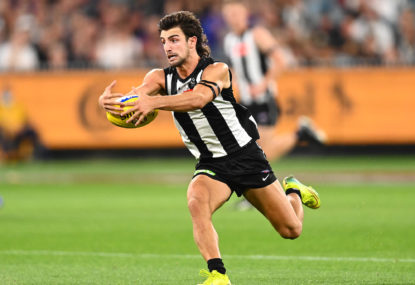