Coming into Round 5 of the 2021 NRL season, I was all fired up and ready to write a column about how the new rules needed to be ditched.

Honestly, I believed we’d seen enough by the end of Round 4.

But four out of 25 isn’t a particularly round number, so I thought I’d wait until this week – with 20 per cent of the regular season in the can – before I showed my cards.

Besides, we all knew what was going to happen based on what we’d already seen.

The Broncos were going to get slaughtered by the Bunnies.

The Sea Eagles would be manhandled by the Warriors.

The Panthers and Raiders would put on a decent showing but ultimately Penrith would be too strong.

The injury-decimated Knights would stumble bravely to defeat against a Gold Coast side that needed the win to prove to the doubters they could make the eight this year.

The Storm would humiliate the woeful Bulldogs.

The Roosters would prove too strong for a Cronulla side that admittedly has a lot to like about it.

The Tigers would notch up win number two of the year against the rabble that is the Cowboys.

And the Eels would continue their undefeated start to the year against a Dragons side that was proving better than the pundits thought but had yet to face any real opposition.

Honestly, why even bother playing the round? These new rules meant it was all so predictable.

Instead, half those scenarios played out.

Souths and Melbourne won by cricket scores, the Panthers were ultimately too good for Ricky Stuart’s boys and the Chooks got the chocolates as well – although the circumstances in which Easts won, coming roaring back with 20 minutes to go to snatch victory from the jaws of defeat, means I’m hesitant to call that a successful prediction on my part.

As for the others? Daly Cherry-Evans reminded us all that talk of him leaving the northern beaches is just that, talk, and that while Manly have got their salary cap issues, that’s because they pay really good money to really good players.

Newcastle were in no way brave and the Gold Coast showed us what they can do when they flex their now considerable muscles.

Todd Payten got his first win as a full-time coach on the back of a first-half blitzkrieg led by five-eighth (not fullback) Scott Drinkwater. 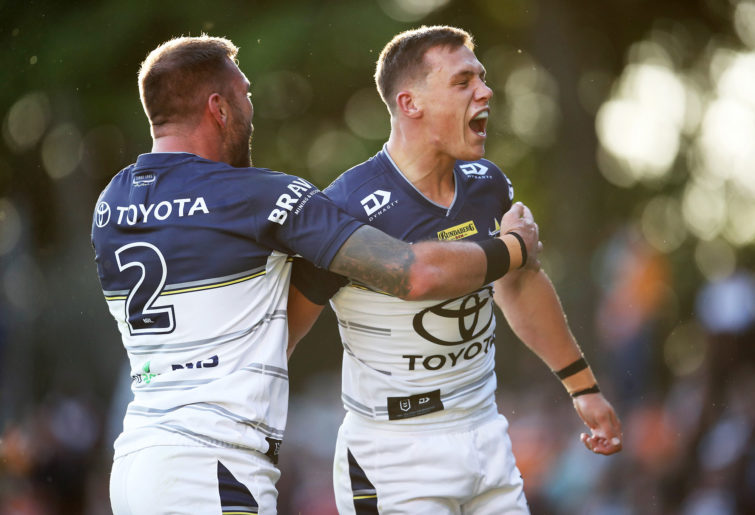 And the Dragons made those who predicted they were on track for the wooden spoon before a ball had been kicked look like the fools they are (ahem, ahem).

It was, dare I say it, a decent round of footy.

And yes, there were the blowouts that had been such a blight on the game over the first four rounds, but name a year when it would seem odd that two of the best teams in the league blast two of the worst teams off the park?

It’s not an easy pill to swallow for Dogs and Broncos supporters but guess what, 2019 wasn’t much fun for the Titans, 2018 was rough for the Eels, and Knights fans spent three long years from 2015-17 coming home from Marathon in a state of despondency.

Someone’s gotta come last. This year, it looks like it will be one of the Bulldogs or Broncos – although North Queensland should be mindful that one swallow does not a summer make.

And when these poor teams play the excellent teams, the outcome is unlikely to be pretty. Again, that happens most years.

As for Newcastle’s embarrassing loss? What can I say but that I’m increasingly seeing the writing on the wall for season 2021.

Of course, missing the finals is also a likely outcome when you’ve had the injury run the Knights have – which is not an excuse for the team’s performance, merely to point out that a team so depleted of top-line talent probably isn’t going to finish in the eight. Yet again, that happens most years.

All of which is to say that while the opening four rounds made for pretty ugly outcomes, there’s a possibility that it was the teething period that such rule upheavals were always going to have.

I’m not saying I’m totally sold on them – in fact, I stand by everything I wrote a few weeks ago about the problems with the six-again rule – but four rounds is not a sufficient sample size to determine whether or not these rule changes make for a better product.

The noises coming out of NRL HQ suggest this season will play out with the new rules in place. I was furious about that possibility last Thursday afternoon.

Today, I’m more inclined to see how it all shakes out.