Leathering it: Who has the biggest boot in world rugby?

Given the uniqueness and high demand of a long-range boot, here are a few candidates who have serious claims to possess the largest kicking game in the world.

Jordie Barrett
His general form has been awesome of late and he cannot stop striking audacious shots at goal.

Scouring youtube, it seems his longest attempt is 63 metres against the Chiefs last year or a similar distance against the Jaguares before the pandemic.

His simple and smooth kicking technique is a sizeable factor in his ability to strike the ball with power and accuracy. He is the lone, long ranger that New Zealand will need to utilise and have needed for years, given Beauden Barrett’s inaccuracy from the tee, and the smaller but sharp boots of Richie Mo’unga and Damian McKenzie.

The Wellington thunderbolt was perhaps the unluckiest, with the post upright saving a famous Wallabies win in Wellington. The third Argentina miss was more of a shocker but that does not shade the fact that Hodge has a big, levering kick on him that Australia have not fully utilised.

A 60-metre shot on Test debut showed and regularly nailing shots from 60 out for club and country means that Hodge’s boot will rarely be questioned on distance, but rather direction and ability to absorb pressure. 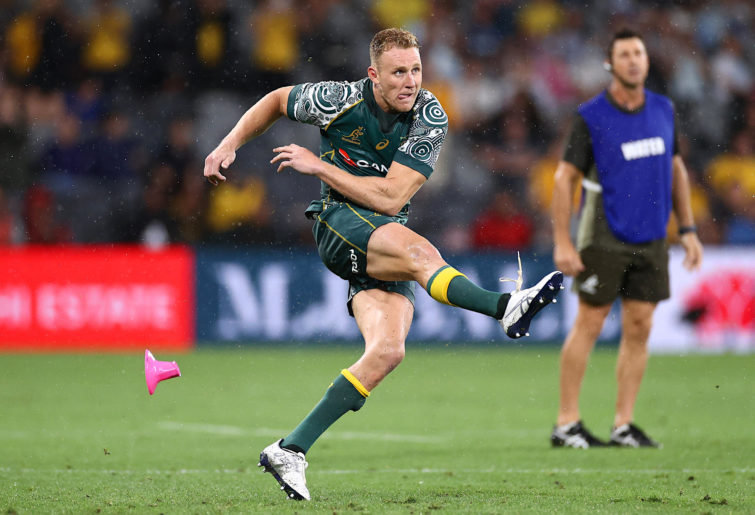 Francois Steyn
Possibly has the most valid claim, given how many extra years he has on Hodge and Barrett, but spending time on the Highveld has undoubtedly led him to possessing a gargantuan kick – a recent 64-metre effort against the Lions shows at his age, he still has it.

His most iconic showing of his right foot is probably a monster drop-goal from 60 out against Clermont over a decade ago.

Elliot Daly
While his England form has been suspect recently, there is no doubt about his ability to whop a kick. His most memorable is probably from 2018 against South Africa in Johannesburg, with a 61-metre kick being made to look easy.

His all-round kicking game, versatility and monster boot ultimately deserved him a starting spot against New Zealand for the Lions. While hard for him to make this year’s on current form, but he definitely has the biggest kick in the home nations, perhaps something Warren Gatland will consider before his squad announcement in May.

Handre Pollard
No surprise to see another South African, but what’s impressive about Pollard is that he likely has the longest kicking range for a natural flyhalf, whereas the other players mentioned are only back-up or utility 10s.

His accurate goal kicking ultimately played a huge part in South Africa’s World Cup success, with a drop goal from 55 out against the All Blacks showcasing his ability.

Providing he is fit, don’t be surprised to see him and Steyn launch some rockets from 60 out to sink Warren Gatland’s men for every ill-disciplined Maro Itoje penalty ceded.