Big changes were needed, and Kevin Walters bit the bullet at Red Hill this week.

It may not have been enough for the Brisbane Broncos to get over the line in a tight tussle at Suncorp Stadium against the Penrith Panthers last night, but it was their best performance since the COVID shutdown.

Since that time, the Broncos had played 23 games, winning just two. Both of those wins were uninspiring, dull encounters against fellow cellar-dwellers the Canterbury Bulldogs, so they were hardly worth writing home about.

Last night was number 24, and arguably, the first time they have shown any sort of real promise in what has been an unbelievably long 12 months.

When you run through the Brisbane side, there is enough talent that they should have at the very least been competitive in plenty of games, and that is exactly what they were able to do to the defending minor premiers.

While the end result now has the Panthers sitting pretty with six wins from six starts, it was a bit of a wake-up call for Ivan Cleary’s side last night. They played like they were expecting a cakewalk, and like the Broncos were deserved $13 outsiders heading in.

And while they may have been on form, the dropping of Anthony Milford and Tesi Niu seemed to spark the Broncos to life to the point the home side had a buffer heading into the halftime break, and only a 40-metre field goal from Nathan Cleary could break them at the end.

The Broncos certainly had plenty of opportunities to put the game to bed at the end, and while the frustration from their lack of ability to do so will no doubt be brought up in team meetings this week, that can be put down to a lack of experience, with the spine collectively having just 169 matches between them.

But the pleasing elements far outweigh the negatives for the Broncos, particularly given in a fixture at a similar time last year they were blown out by the Roosters at home to the tune of 59-0. 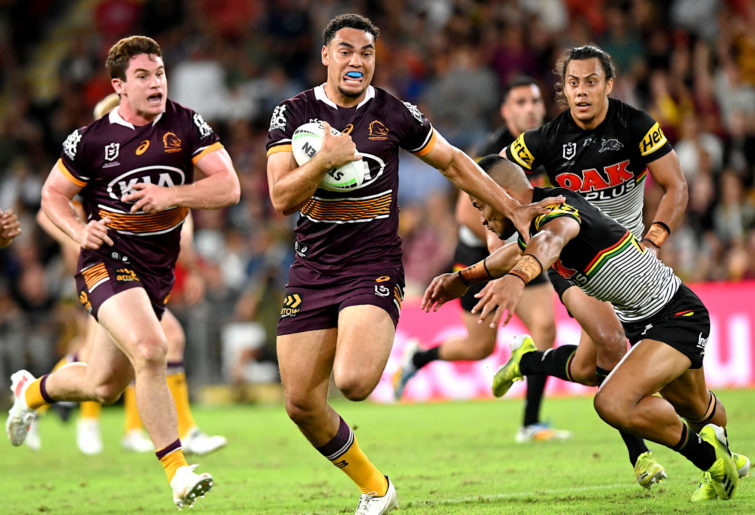 Making comparisons to the 2020 campaign is not what Walters will want his team to be doing in Brisbane, but it’s hard not to do from the outside looking in given how abysmal it was, but also given the big calls weren’t made regarding team selection, recruitment and retention.

Dropping Milford and Niu may not have actually made that much of a difference to the overall quality of the team, but it seemed to change something.

Almost as if seeing the million dollar man dropped meant every single player left in the side was suddenly fearing for their spot next week, and it brought about a much higher-energy, more intense performance where the defence stuck solid for a vast majority of the 80 minutes, instead of coming into and out of matches as it has done for four of their first five this year.

It’s that energy they need to take with them moving forward, and Walters needs to find a way to harness it because with the talent they have in their side, particularly the forwards, it will make Brisbane a far better team than what they have shown, both last year and into this year.

Penrith dropped plenty of footy of course, aiding to the Broncos’ defensive effort, but some of that credit has to go to Walters’s side, who, on the surface at least, seemed to be defending with not only more energy, but a very different structure across the line to the one we have seen in the early weeks.

There were still the breakdowns of structure, particularly in the try allowed by Richie Kennar racing off his line as if starting an Olympic Games 100-metre sprint, but they too, just like the errors in their game, will iron out with time if they can continue to put the same level of effort in as last night.

The win won’t worry the Panthers overly. It’s impossible to be at the top of your game every single round, but without Nathan Cleary’s unreal kicking game (almost 800 metres), it’s doubtful the Panthers would have got up given Brisbane’s forward pack had their way with the opposition.

It’s something very few teams have been able to get over the Panthers, a dominant forward pack, and for Brisbane to do it just goes to further prove the talent existing at Red Hill, with Tevita Pangai Junior probably playing his best game in well over 12 months to lead the charge.

The bottom line is that few teams have been able to take the Panthers to the line, and while Penrith played poorly, it doesn’t matter from a Brisbane point of view.

Their run isn’t about to get any easier with the Eels away from home next, then the Titans at home and the Roosters awaiting in Round 11 after matches against the Cowboys and Sea Eagles, but if they can win three of their next five, it may force people to start taking notice.

That is a huge ask of course, given they have won two of their last 24 games, but it’s not out of the question if they play in the same style and with the same intensity for the entire 80 minutes as they managed to last night.

The attack will come, the kinks will iron themselves out with time and experience and while the finals are likely to be a bridge too far this year, they can take solace in the fact their performance was better than it has been for a year.

There are still widespread problems at the Broncos which one game isn’t going to fix, but this must be their chance to start fresh.

The new beginning in Brisbane has arrived. Now we wait to see if they can take it with both hands.