After conceding a devastating six goals last time, Victory sought to avenge their most horrific and mind-boggling loss in club history, yet it was to be topped. City were on a mystifying run of form having lost one in eight and greatly benefited from the addition of eloquent midfielder Aiden O’Neill, however, it was the quick and young wingers that provided the fire.

What we witnessed was the single most humiliating performance from an A-League side in history.

It was Andrew Nabbout’s and Jamie Maclaren’s pitch, their moment as they completely decimated the Victory defence. City’s job was rendered effortless through a clear red card courtesy of Adama Traore, with many questioning whether he will be handed a lengthy ban for reaching for Chris Beath’s pocket.

It was 2-0 at halftime. Five more came after the halftime break. Three goals in four minutes.

Victory lacked distinct leadership and it showed through a lack of clear structure moving forward as City effectively closed them down while in possession, dominating across the park with ease.

However, it was a pleasant sign to see AAMI Park booming once again on a relatively cool April autumn night in Melbourne.

City’s active revelled in Victory’s horrendous campaign and they have plenty more to celebrate as their side is now top of the table for the first time this campaign.

Andrew Nabbout: 9
The former Victory man illustrated his blistering pace with his driving runs into the 18-yard box. The perennial Socceroo demonstrated his strong credentials with a wonder goal from outside of the boot in the 11th minute of the contest. Nabbout subsequently kicked into another gear as he later earned himself a penalty in the 33rd minute off a Jacob Butterfield trip. The second half afforded Nabbout a multitude of opportunities, maintaining his immensely high intensity throughout the fixture until his substitution.

Scott Jamieson: 8
Upon returning from injury, the City captain provided plenty of stability while playing the ball out from the defence as he looked immensely confident, containing the Victory attackers with ease. His defensive efforts likely ensure that he holds down his starting position. 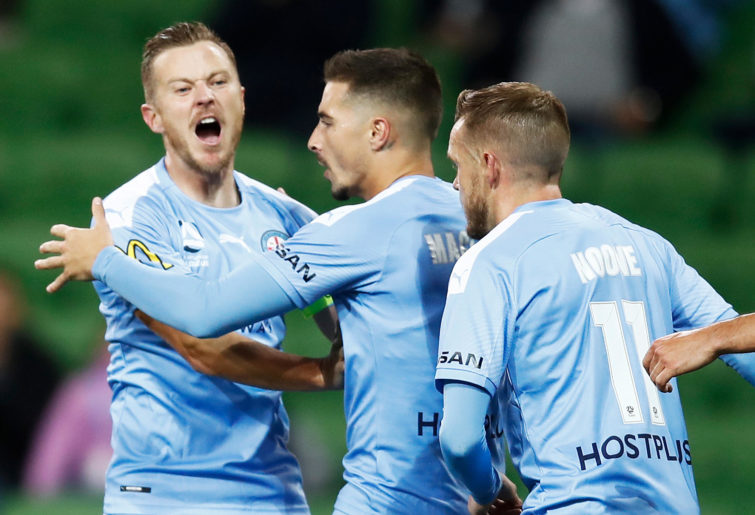 Connor Metcalfe: 8
The Olyroos aspirant looked excellent in transition, moving the ball with plenty of aplomb. His 16th-minute shot went gapingly wide of the goal, however, he complemented City’s immense attacking quality with his genuine football nous.

Jamie Maclaren: 10
Despite not being afforded plenty of opportunities in the first half, he slotted home the penalty in the 34th minute to make it 2-0 and arguably seal it for the City Blues. He later added his second off of a Marco Tilio cross in the 64th minute and his third by virtue of a penalty. He secured his fourth off a Stefan Colakovski cross and his fifth a minute later. Truly remarkable.

Honourable mention: The rest of City’s starting XI and substitutes.

Callum McManaman: 6
The Englishman proved to be the single continual threat throughout the duration of the fixture, troubling Tom Glover early on. He ushered his fellow attackers forward, yet he and much of the Victory’s midfield and forwards languished behind City’s immense quality. He was later substituted.